Few failed to notice the explicit references to Egypt in the young designer’s collection: skirts and sleeves covered in oversized sequins engraved with hieroglyphs, stiff bracelets and a wide collar resembling those of ancient royalty Tutankhamun. The sequins are laser cut by hand and feature both authentic hieroglyphs as well as Chang’s originals inspired by the ancient Egyptian alphabet system.

“Since childhood I was always fascinated by ancient Egyptian culture. When I, during a brief stay in my hometown in Taipei, happened to come across antique images of Egyptian hieroglyphs, I decided to use it as a part of my graduate collection [at BFGU],” Chang says. 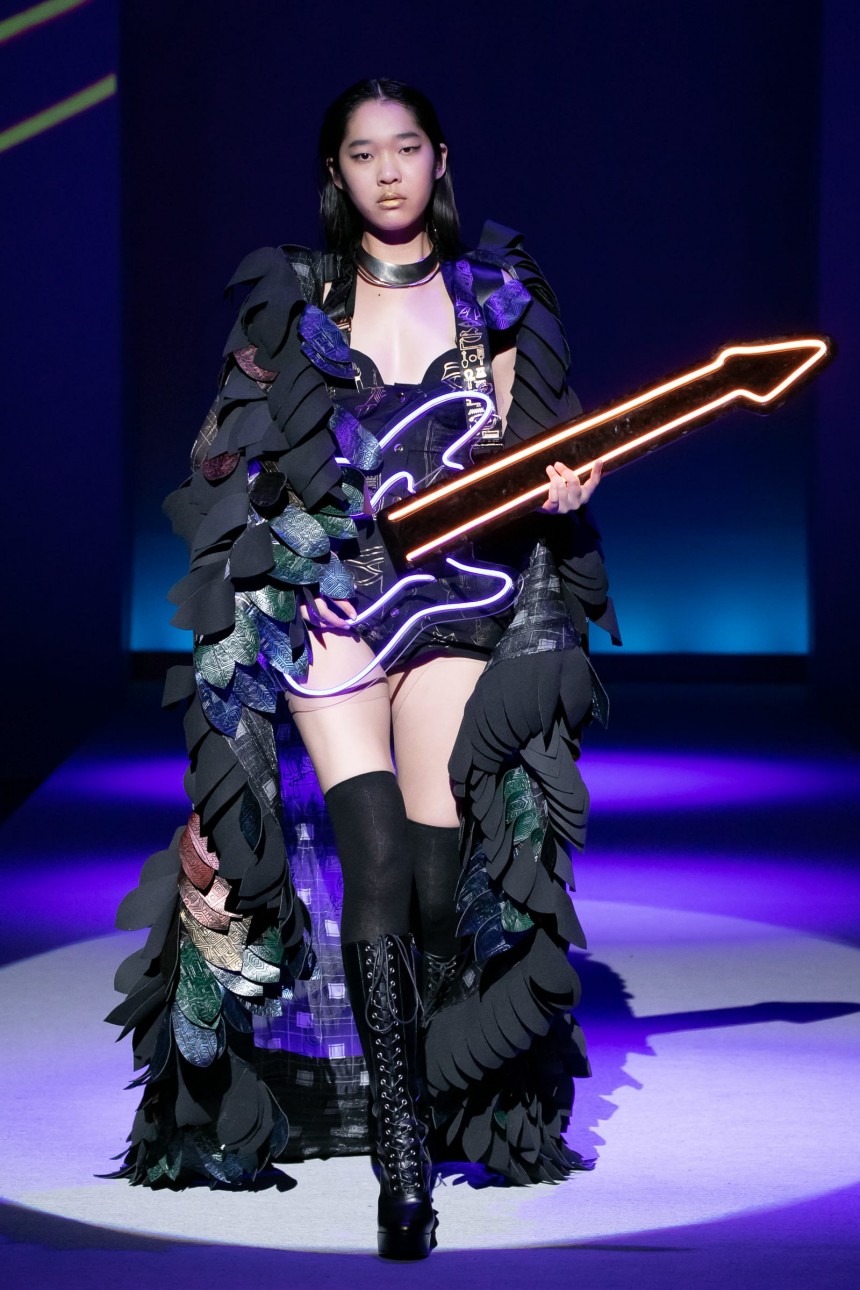 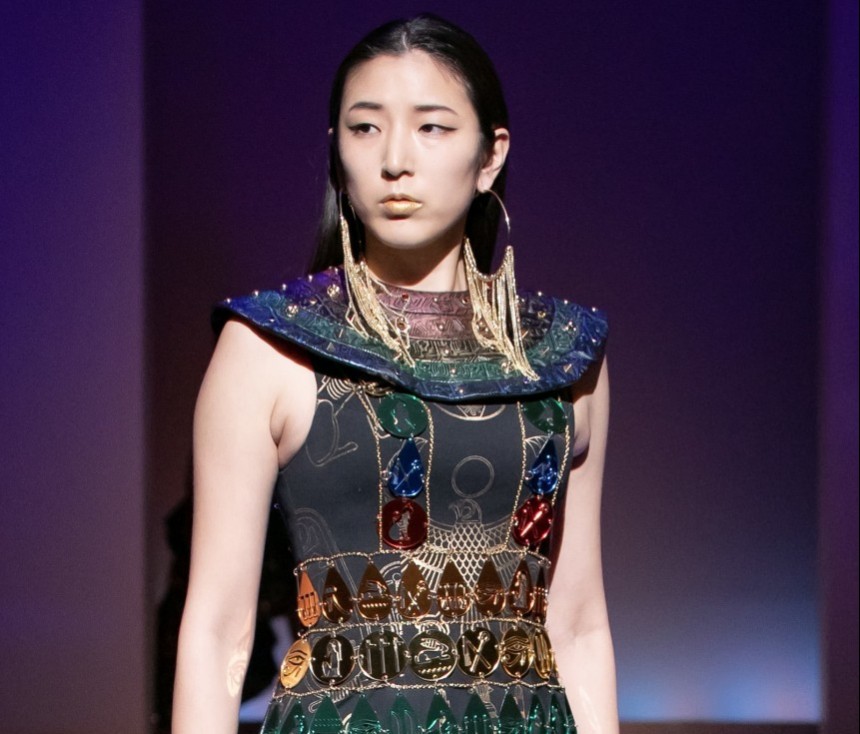 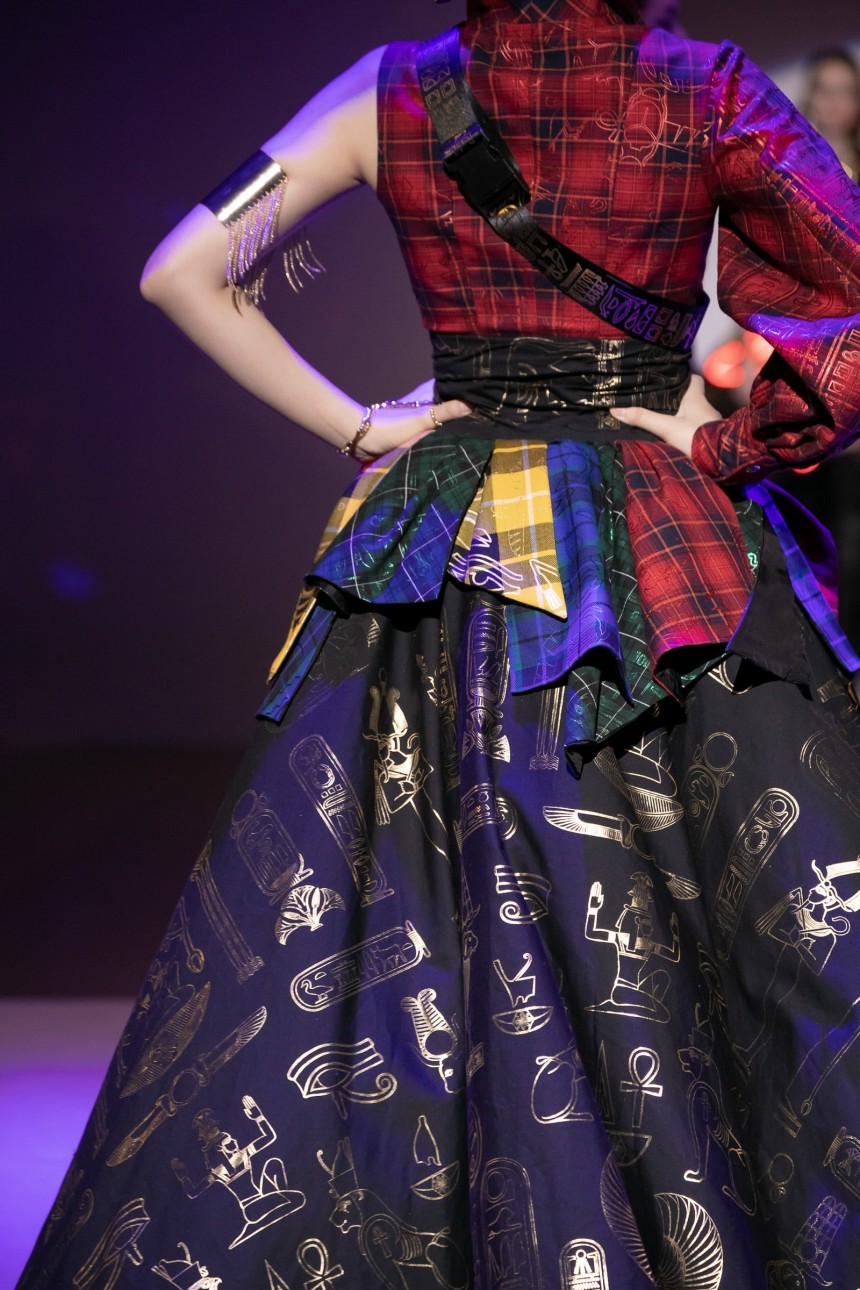 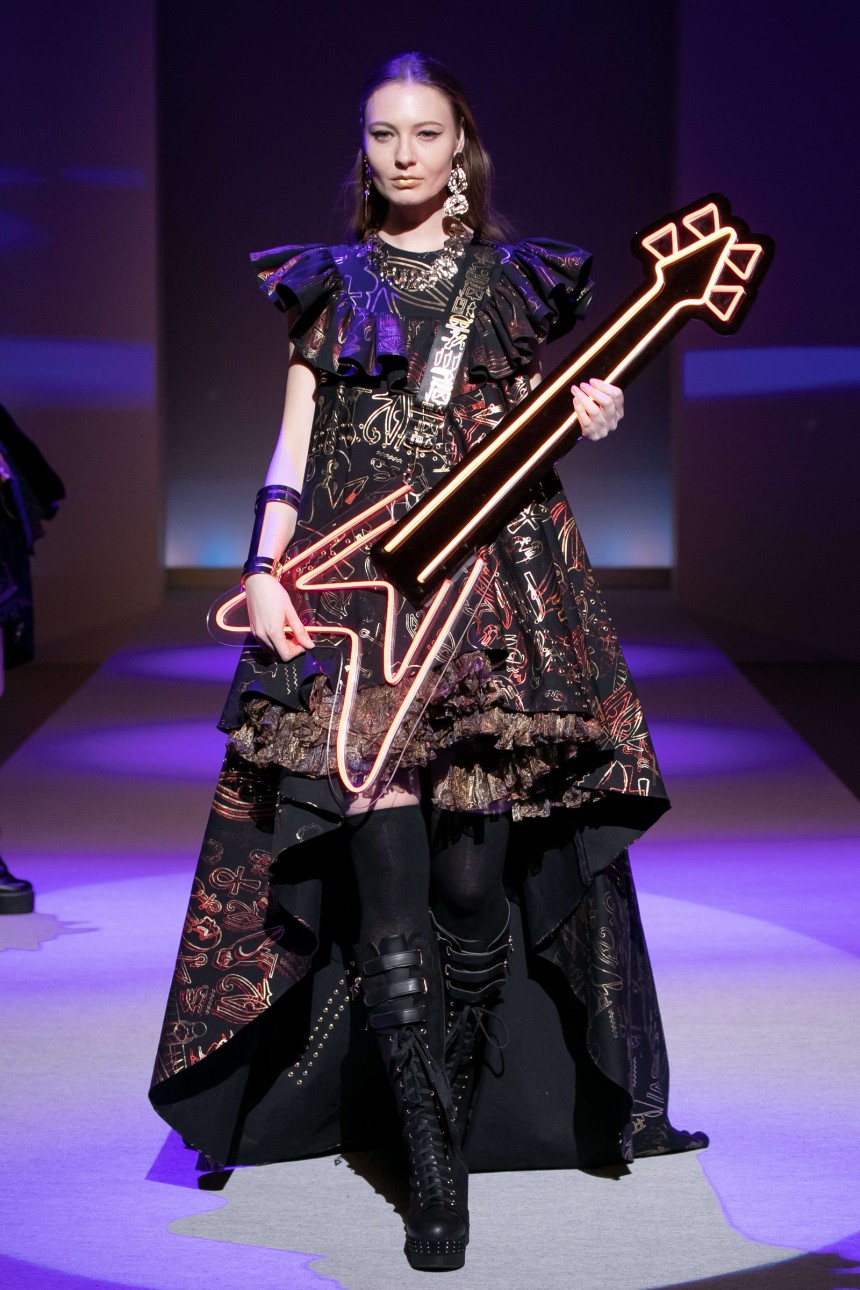 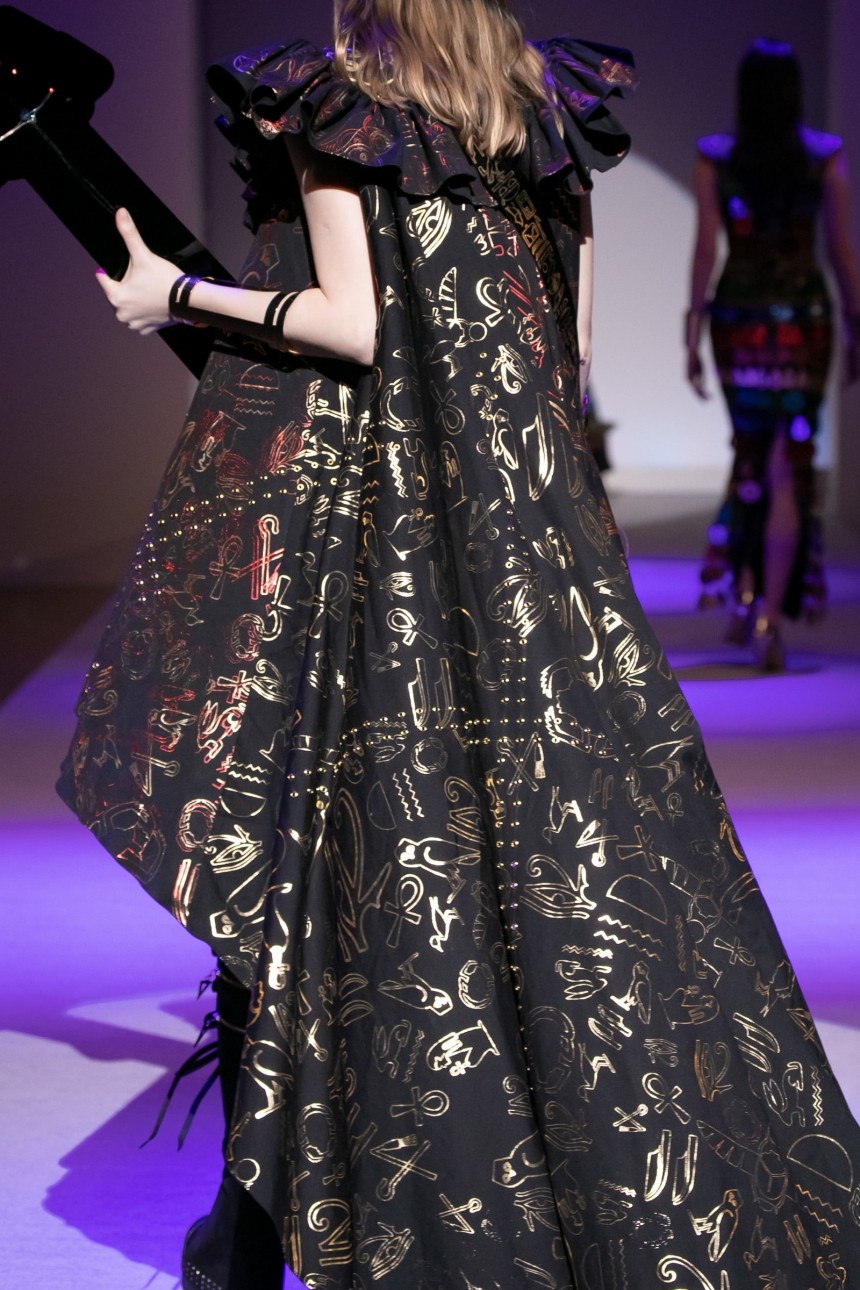 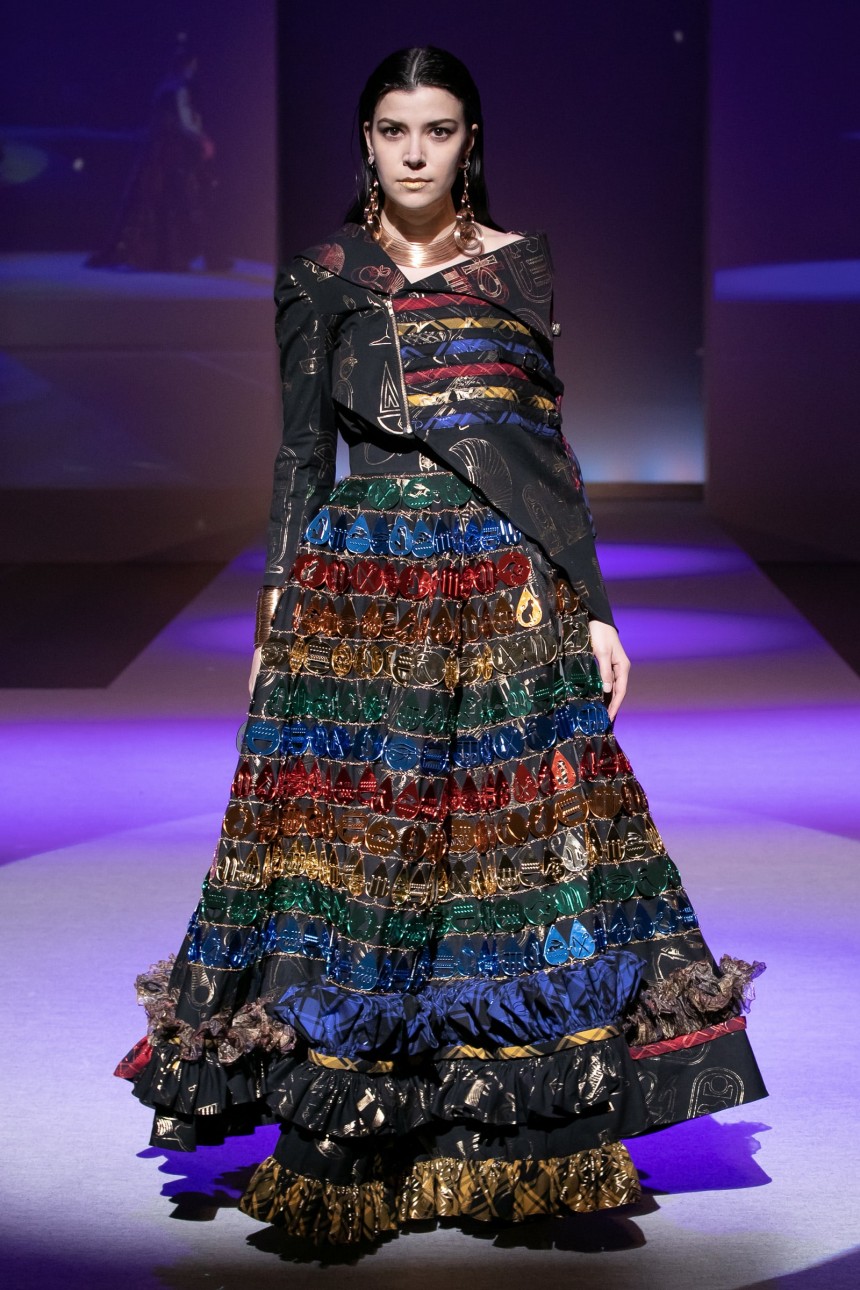 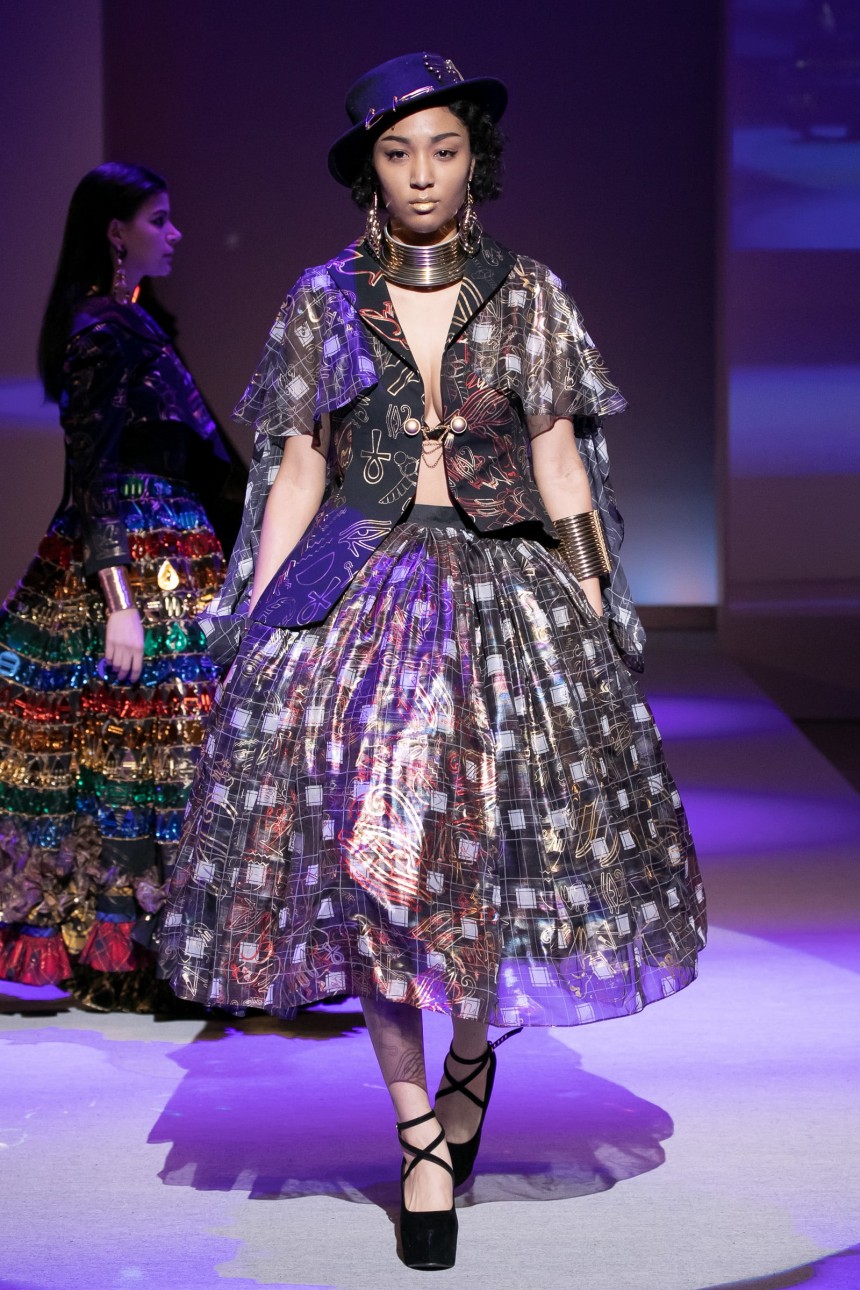 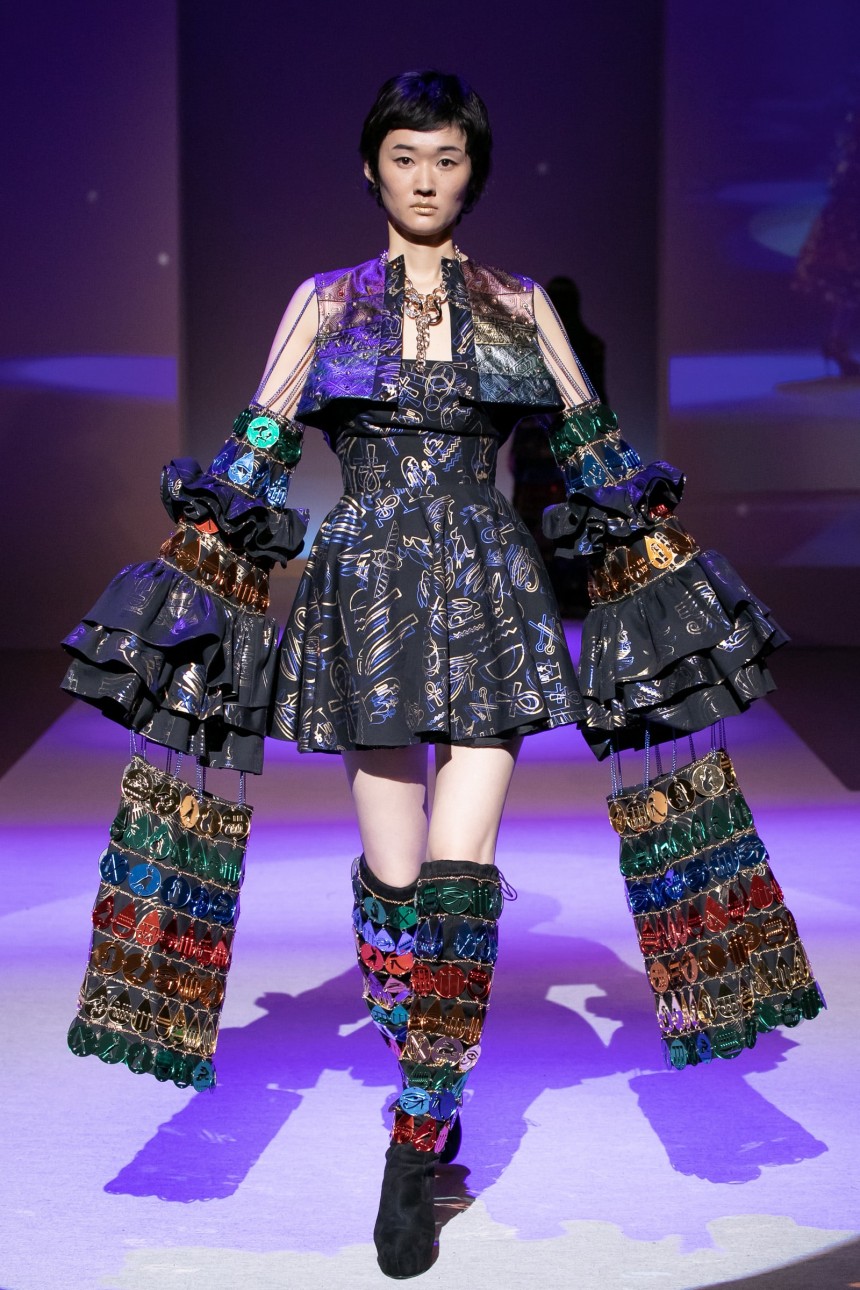 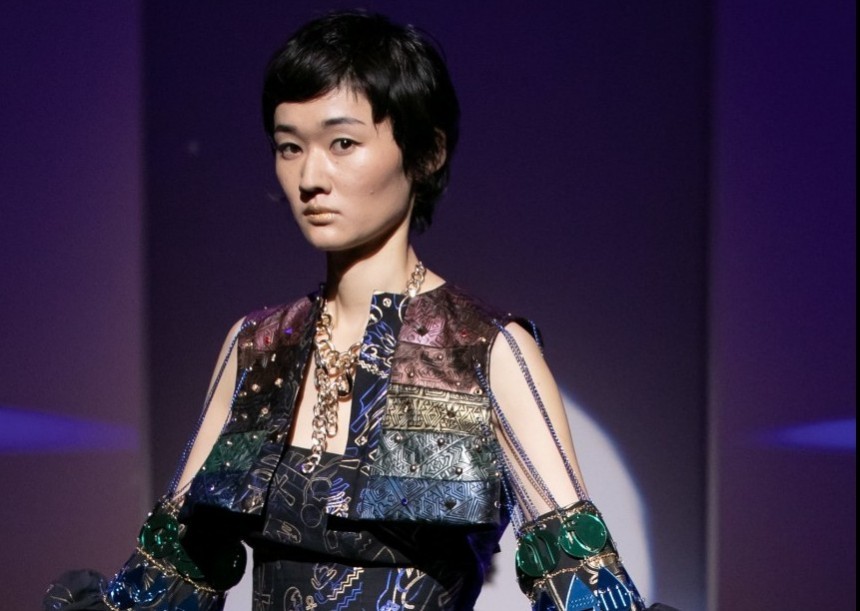 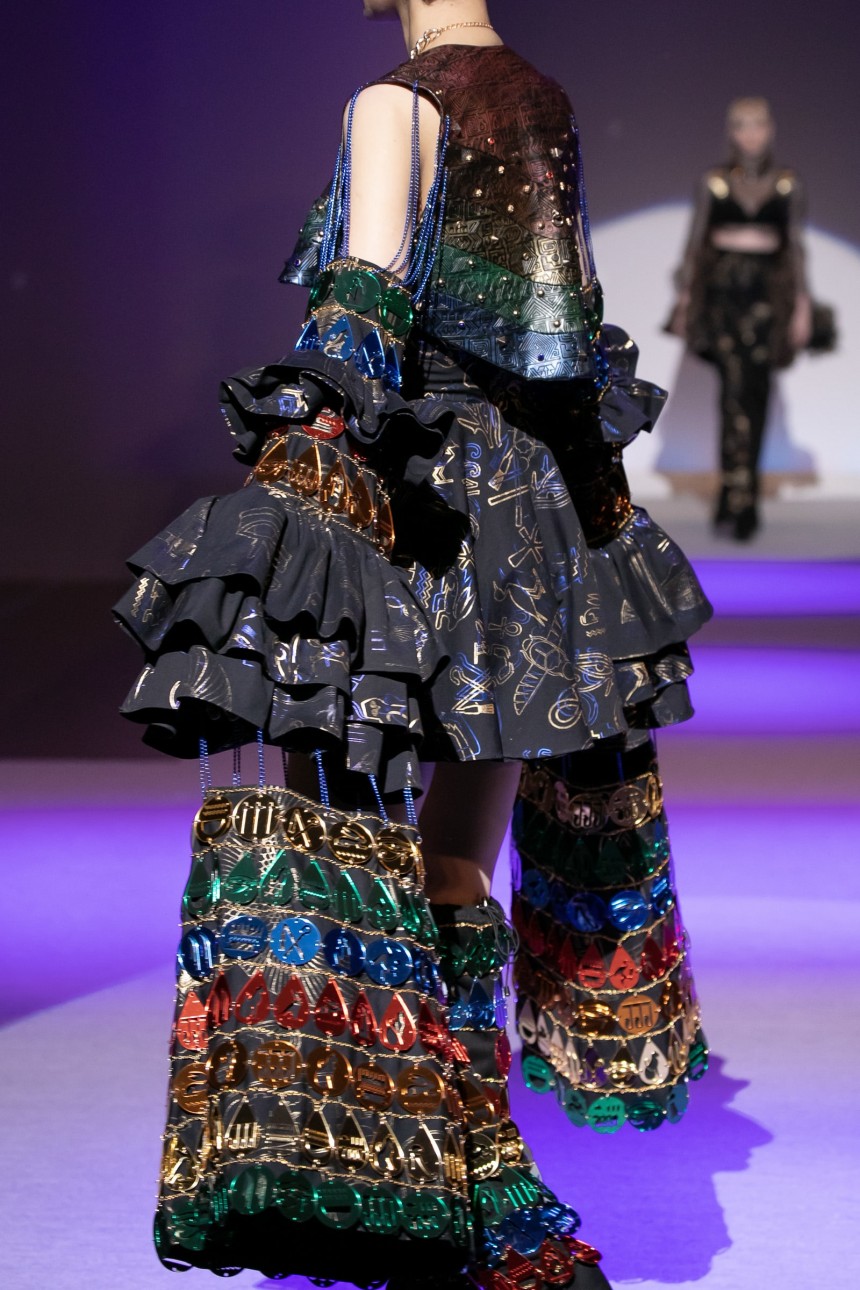 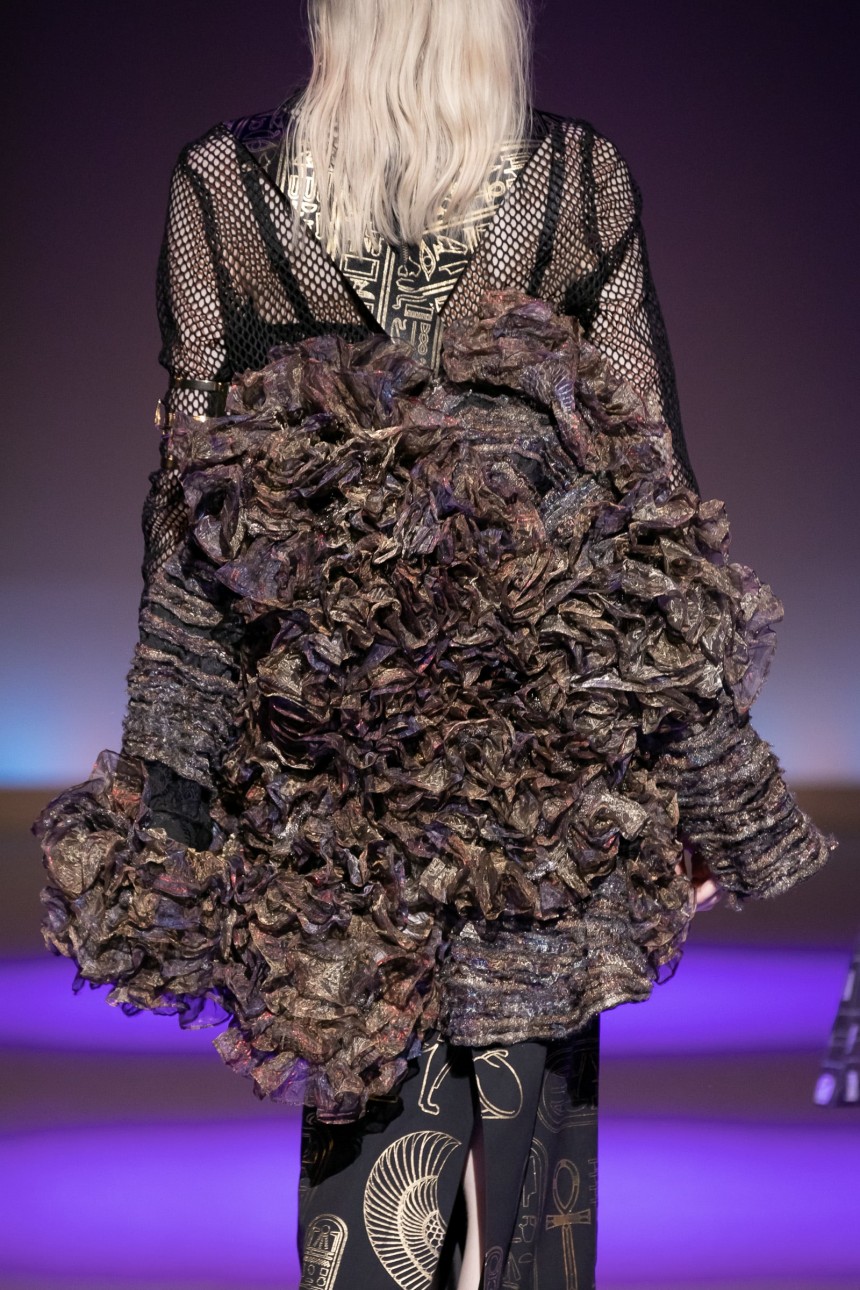 In addition to ancient Egyptian culture, themes of death, incarnation and rock are pronounced elements in the collection. “In ancient Egypt, the pharaoh was a figure of utmost importance. He was sacred, seen as a god rather than human. I imagine that the image of the pharaoh in ancient Egypt was quite the same as the image many of us have of rockstars today,” Chang explains. “Marilyn Manson for instance is celebrated like a god. His visual look and performance makes him appear to exist somewhere between life and death. Also, his music attracts all kinds of people. Although he is classified as a heavy metal star, you do not need to be a hard core fan to enjoy his music. He produces songs such as ‘Sweet Dreams,’ ones that anyone can listen to without getting a headache.”

In October 2015, Chang, who was born in Taiwan, came to Tokyo as an exchange student at BFGU to study fashion design for six months. Although she didn’t speak a word of Japanese at the time, Chang emphasizes that the most important factors in honing one’s craft are visual and practical skills, rather than linguistic ability. Inspired by her time as an exchange student, Chang wished to prolong her stay in Japan. After two years of studying the Japanese language, Chang entered Bunka Graduate University’s masters fashion design course. 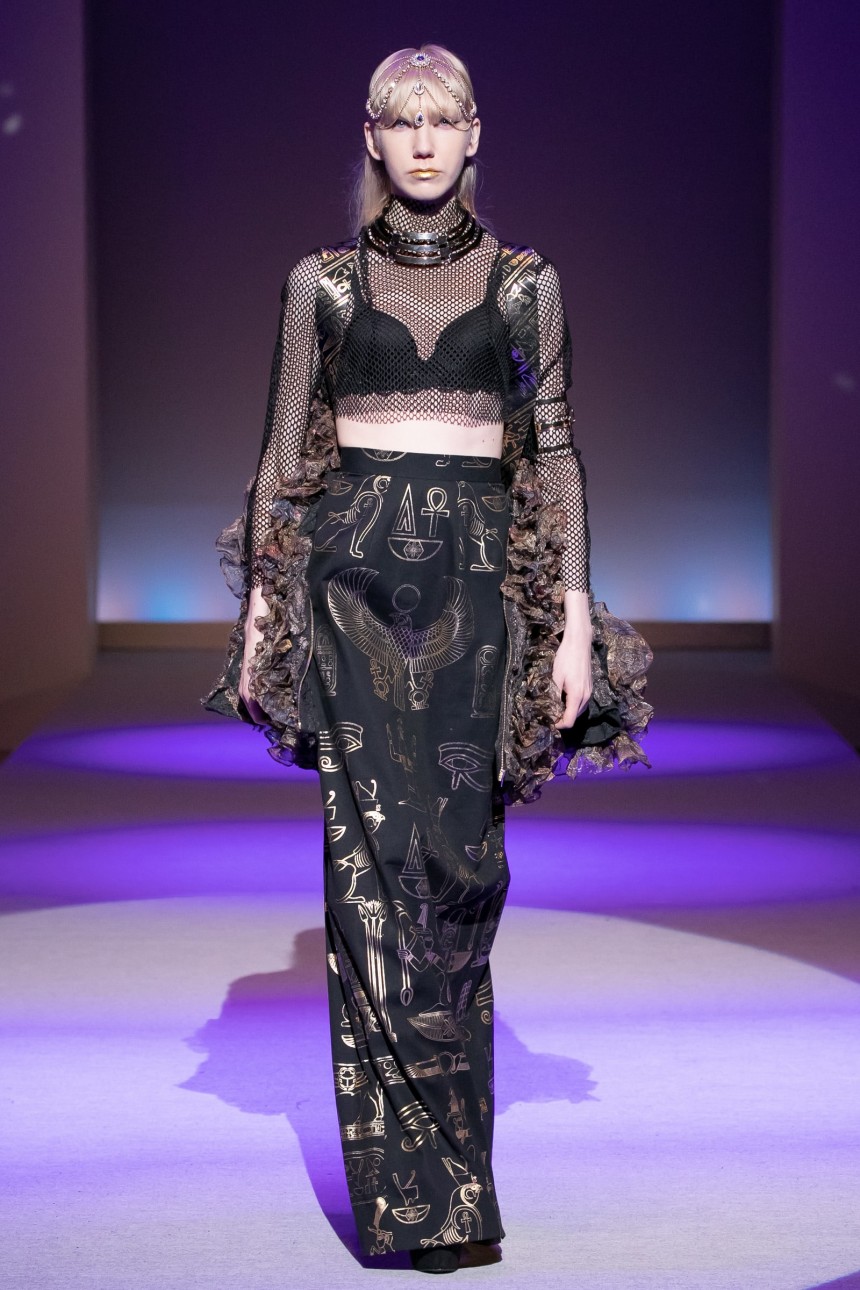 Every January, BFGU holds a fashion show as a part of BFGU Fashion Week. Featuring a carefully selected group of graduate students’ work, the show attracts fashion editors, photographers, established designers and fashion companies from all over Japan. Due to the collaboration with Academy of Arts Architecture and Design in Prague and St. Petersburg State University of Technologies and Design, young design students from Czech Republic and Russia also participate in the annual BFGU show.

The graduation collection took Chang a year to complete. In addition to sketching designs and hunting for the right fabric, the development of her dresses included watching Stephen Sommers‘ action-horror The Mummy from 1999, as well as rigorous researching Egyptian symbols and their meanings.

The result was a dramatic rock-grandeur with a fancy for bling. Long garments with width and volume complemented the models’ golden lips and gleaming jewelry to create an extravagant look. To prevent the looks from appearing too excessive or luxurious, and to keep them rock’n roll, Chang subdues each look with rough elements like metal zippers, wide leather belts and heavy boots. Some models carried neon electric guitars in their hands, one donned a hat and another a sparkling headpiece. With the rockstar as a modern pharaoh in mind, Chang blends notions of life, death and incarnation into a dark but glittery mixture with a high degree of pomp.

When asked if there was any piece that was particularly challenging to make, Chang looks at the flare jacket that makes up a part of the collection’s final look.

“In fact, it is made of 100 percent iron. I came across Asada Mesh Company and purchased ten meters of the iron fabric [spiral wire mesh]. However, since I was not very happy with the gray color, I burnt it,” Change says. Despite the fabric being as thin as tulle, its metal qualities make it resistant to heat. Without altering the shape or structure, the flames affect only the color. “I burnt it in the backyard of my school and it turned out like this.” Chang shows the fabric in nuances of purple, green and dark gold, colors that are associated with glam rock and therefore suit her collection perfectly.

Chang graduates this March, and as for the prospects for the future, Paris is at the top of the list. “My dream is to establish my own brand but before that I need experience. I want to study French and then work for one of the major fashion houses in France, like Chanel or Dior,” she says.

Images from the BFGU fashion show are to be found at Fashion Snap, while the collections of all BFGU graduates can be viewed at BFGU online magazine. To see more of Chang’s work, check out her Instagram page.