Robin Zander and Rick Nielsen on Japan, the band, and new tunes

Cheap Trick has never had an issue with getting Japan to want them. The rockers have been a favorite in Japan since the late ’70s, and their fanbase here is going as strong as the band. Moreover, Cheap Trick’s celebrated 1978 performance at The Budokan is credited for putting the stadium on the global map as a venue that beckons the stars—and stars-to-be. Fresh off the release of their latest album Bang, Zoom, Crazy… Hello, lead singer Robin Zander and guitarist Rick Nielsen talk to Metropolis about their relationship with Japan.

You first came to Japan in 1978 and immediately garnered a fanbase; meanwhile, in the U.S., your first few albums didn’t initially do as well as hoped. Why do you think the Japanese were able to recognize your genius immediately?

Robin Zander: The main reason was that [Japanese people] liked our music, but the reason that they had even heard of us in the first place is because of bands like Kiss and Queen, for whom we had opened shows in the United States. 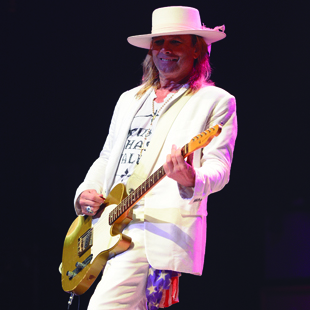 Do you think your love of The Beatles, a band that’s also beloved in Japan, is a common thread that helped cement your relationship with the Japanese people?

RZ: I don’t think it was just The Beatles, it was just the relationship that Cheap Trick had with the general radio content of the ’60s, and the fact that we wore our influences on our sleeves.

Did Cheap Trick record “I’m Losing You” live in the studio with John Lennon, or were your parts recorded on separate days?

Robin, you’re famous for having worn a white suit from early on in your career. Was that a reaction to all the black clothing in rock music, or was there another reason?

RZ: I believe it’s because I was just tired of it—all the black leather and all of that. My dad always dressed up in a suit when he went out to play—he was a musician as well—so I thought, “I’m going to do that.” 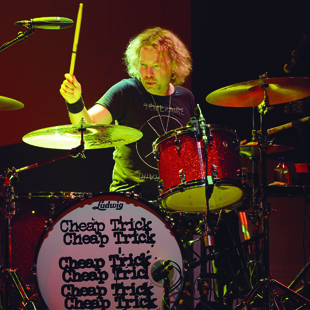 You no longer tour or record with Bun E. Carlos, but he’s still listed as an official member of Cheap Trick. What’s the situation?

RZ: Well, the thing is that, over the years, things change, and you get different ideas of what you want to do with your career. Between Bun E. and myself, there was a division there that we couldn’t come to terms with.

Cheap Trick first replaced Mr. Carlos for live performances with Rick’s son Daxx. He seems to have mastered the former’s feel for your classic tracks. Did he grow up playing Cheap Trick songs with his father?

RN: No, he actually grew up liking more metal bands, like Pantera and Metallica.

The new album Bang, Zoom, Crazy… Hello is the first one to feature Daxx on drums. He stays true to the classic Cheap Trick sound, but also brings in new and fresh elements where appropriate. Did that happen organically, or did you discuss it as a band?

The new album’s title, Bang, Zoom, Crazy… Hello, is quite original. What’s the story behind it?

RN: Originally, it was the name of one of the songs. [Then] Robin told me, “I still like that title. It’s kind of like the four of us.” So it saved us the trouble of coming up with something clever for the album title that you have to explain to everybody. 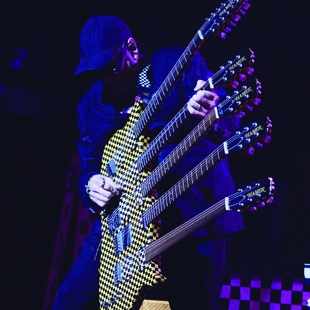 Some critics have stated that the new single “When I Wake Up Tomorrow”  sounds like the late David Bowie. Was he ever an influence?

RZ: Bowie was always an influence, from Ziggy Stardust and before that, onwards.

If you could join any other band that is currently active, which would it be?

RZ: Let’s see. I could join Queen! I could probably do that!

Do you have any plans to tour your new album in Japan?

RN: We’d love to. We’ve been totally busy getting the new record ready, and being inaugurated into the Rock ‘n’ Roll Hall of Fame, but Japan is always on our minds, and one of our favorite places to play.