A festive escape to the sea in sunny Okinawa

As much as Tokyoites love dressing up and sparkly in-store decorations, December 25th is far from the festive norm that many expats might have been used to. 2016 was the first time I spent the entire winter holidays within “The Big Mikan.” Commuters squashed up in train carriages, convenience stores open round the clock, fake gift-wrapped boxes under the office tree…and no amount of KFC could give me that genuine warm fuzzy feeling that turkey swamped in gravy, my nagging mum or the Queen’s TV speech instantly rouse. In 2017 I started to embrace the differences we have here in Japan, including that of festivity celebration. Only a three-hour flight from the capital, Okinawa is a major vacation spot for Tokyoites in spring and autumn. But what about winter, and more importantly, Christmas? Swapping snow for sand, I discover that a jolly holiday in swim shorts just might be what Japanese Santa ordered.

The perk of flying to Okinawa in December is that it is considered ‘off season’. Rates for flights and accommodation are usually much cheaper than in the peak months of October and early November. And not only that, you’ll get to enjoy paradise free from the masses. I stayed at The Ritz-Carlton because if you can’t treat yourself at Christmas, when can you? The luxury golf and spa resort is located in the Northern part of Okinawa at Yambaru, with stunning views of subtropical green hues from each guestroom, which is ideal for creating cherished winter memories, with or without mistletoe. 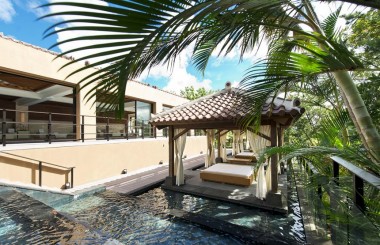 Snowmen and snow angels don’t have to be icy white; they can be shades of glorious gold. Okinawa has an abundance of sandy beaches ready for your arty creations. Nichibama Beach spans one kilometre long with blue waters that trickle towards the gorgeous Kerama Islands. Mission Beach in Nago is another stunning location to get some winter sun and rejuvenate before returning to the office in January. Typically the weather in December ranges between 15 to 20 degrees Celsius, which is lovely for the shores but perhaps a little chilly for the sea. I decided to have a splash in the resort’s indoor pool instead, where the water is kept at 30 degrees Celsius, before throwing on a bathrobe and grabbing the Awamori cocktail indigenous to the area.

No need to fight through hordes of Christmas shoppers— in Okinawa, you can browse and gift-wrap in peace. I found items unique to the island on Tsuboya Yachimun Street, where you can take a yachimun pottery class to create personalised gifts. Makishi in central Naha is the place to find Okinawan souvenirs and island trinkets and Kokusai Dori (International Avenue) is a huge shopping and gourmet strip where you can get your hands on a bottle of Awamori to take home. The Ritz-Carlton’s Okinawa-themed Christmas tree, in the grand lobby, is decorated with traditional ornaments including Shisa (the guardian lion of Okinawa) for you to exchange gifts and take photos under on December 25th. 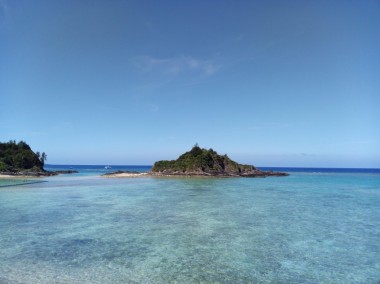 December is when whale watching season begins, as humpback whales gather in the seas surrounding Okinawa to give birth and nurse their offspring. There are a number of companies offering tours, including Top Marine on the Kerama Islands, which takes guests on small high-speed boats to follow the creatures to optimum spots. If the thought of bouncy boats makes you seasick, then witness ocean life behind glass at the Churaumi Aquarium, which was the largest aquarium in the world until being dethroned in 2005 (today it ranks at #11). For traditional charms, Okinawa’s Shuri Castle is spectacular. The former scarlet palace of the Ryukyu Kingdom is lavishly decorated with a singular architectural style.

True love can be found in the shape of Okinawa’s culinary delights. Signature dishes include Okinawan soba (wheat noodles served hot in a soup with pork), Rafute (braised pork belly) and Tacorice (Mexican tacos mixed with lettuce, ground meat and Japanese rice.) Blue Seal ice cream can be found all over the island, featuring kooky flavours (like purple yam) that you won’t find outside of Japan. On Christmas Day, I suggest booking a table at the resort’s Gusuku restaurant for something special. From its new Christmas menu, I sampled the “Seaside Christmas” cocktail jelly ball appetizers, red and green plate sashimi, and the “Santa Claus” dessert plate. Groups should definitely try the “With Family” Japanese hot pot which includes local Wagyu beef and Agu pork, finished off with your choice of rice or noodles in the tasty broth. Brussels sprouts and cranberry sauce may have been missing for two years in a row for a London lad like me, but Okinawa has all the new ingredients to bring a spectacularly merry Christmas to all. 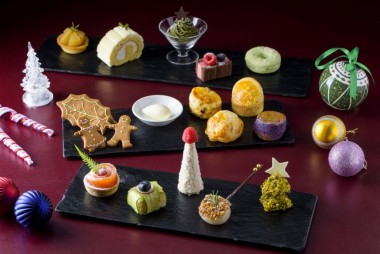 James Wong is a freelance travel writer based in Tokyo. His passions are making Spotify playlists and buying plane tickets. Instagram @boxojames