Japan’s battle for the smoking ban 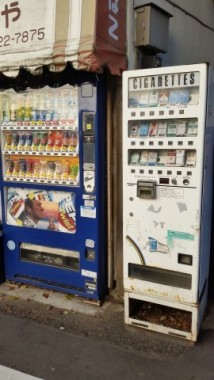 Right outside my local public swimming pool there are two vending machines, one selling drinks and the other selling cigarettes. For ¥150 I can either buy some water or a ten-pack of cigarettes.

The juxtaposition of these two says something about the prevalence of cigarettes in Japan. World Health Organization (WHO) officials have been calling for Japan to implement a smoking ban ahead of the 2020 Tokyo Olympic and Paralympic Games. And while a smoking ban may seem like a no-brainer, it is in fact a rather complicated legal and economic battle, given the experiences of former host countries of the Olympics.

Japan has one of the largest tobacco industries in the world. Last year, tobacco sales yielded ¥2 trillion ($19 billion) in tax revenues, and this despite the annual steady decline in the number of smokers. In 2016, just over 20 million people smoked in Japan with a consumption rate of 1713 cigarettes per smoker per year. Though this is below the Japanese national average from 10 years ago, Japan is still in the top five of cigarette-consuming countries globally.

These numbers give an idea of the socio-economic scope of the industry which is compounded by the fact that the Japanese Ministry of Finance (MoF) owns one-third of the shares in Japan Tobacco. A loss of income from tobacco sales would have a major impact on government finances. This is further aggravated by the fact that many lawmakers and policy lobbies are backed by industries in support of tobacco.

Shigefumi Matsuzawa, a former Kanagawa Governor and current member of the House of Councillors, recently spoke about tobacco legislation change at the 6th Conference of International Union Against Tuberculosis and Lung Disease (APRC 2017) held in Tokyo. He highlighted that the vested interest by both commerce and government in the tobacco industry is the single largest impediment to change in Japan. A key obstacle is the Tobacco Business Law. This MoF-regulated law calls for the encouragement of the production and sale of tobacco, as well as the maintenance of stable tax revenue. It is currently the only law that directly regulates tobacco products, and a massive overhaul is long overdue.

In March 2017, the Japanese Ministry of Health and Welfare issued a revised white paper on smoking for the revision of the nation’s Health Promotion Act. The draft calls for a ban on indoor smoking in government and sports facilities, but allows partial bans with the use of smoking rooms in offices, theatres, restaurants and bars. Smoking would still be allowed in small bars and cafes, following protests from owners not wanting to lose their patrons. This is a far cry from the initial white paper submitted in the fall of 2016, which called for a total smoking ban in indoor public spaces given the evident causal relationship between passive smoking and diseases such as lung cancer, heart disease, strokes, childhood asthma and sudden infant death syndrome. The draft legislation — currently facing major resistance — does not even tackle the wider issue of banning implicit tobacco advertisement, allowing graphic warnings on cigarette packaging and generally raising public awareness regarding tobacco-associated health risks. These are all requirements under Article 13 of the WHO Framework Convention on Tobacco Control (FCTC) – which Japan has signed.

Japan’s fierce resistance to the smoking ban is in contrast with South Korea, where a comprehensive national ban on smoking has been in force since January 2015. However, even in South Korea the smoking ban, as well as a 200 percent increase in the cost of cigarettes, has had the opposite of the intended effect, with cigarette sales increasing by 16 percent in 2016. The South Korean experience shows that a multi-pronged approach is required: one that goes beyond the legal and economic aspect and focuses on the individual issue of smoking as a personal addiction and a public health risk.

According to the Japanese National Cancer Center, passive smoke in the workplace results in the annual deaths of 4,110 women and 3,680 men. Exposure at home leads to deaths in an estimated 840 men and 6,320 women. Women, the elderly and children face the greatest risk. This feeds into a wider public health concern for Japan, given that cancer, heart disease and other lifestyle diseases account for about 60 percent of deaths and 30 percent of the total national healthcare expenditures. These figures will only increase as the elderly will amass 40 percent of the total population by 2050. The Japanese government has prioritized health care as one of the key points in its “New Growth Strategy” and anticipates that the size of the health-related industry could expand to ¥26 trillion by 2020. That would mean that the healthcare market in Japan, currently ranking third in the world, would soon rival for the top position – potentially toppling the US and China.

Japanese lawmakers may find it in their best economic interest to go smoke-free. Making the legislative leap from supporting the tobacco industry to supporting the health-related industry, the potential losses from decreased tobacco sales (a mere 1.3 percent of the total national tax revenue) could be covered by the tax revenues made from the increased sales of health-related goods. Japan will have made an investment that lasts well beyond the Olympics and will be on track to generate a healthy buffer for the incoming ageing population.