Leave it to Japan to turn something mundane into something rather wonderful. Convenience store coffee to this American soul conjures images of weak, nearly transparent coffee in a Styrofoam cup served by a surly but pleasant employee at a truck stop. It’s the stuff that long road trips are made of, but never a highlight.

Convenience store coffee in Japan, however, is another matter. It tends to be fresh, tasty, relatively strong, and readily available at a reasonable price. Let’s be clear that it’s not gourmet or even Starbucks grade, but it does hit the spot—and well.

It all began in 2011, when convenience store chain Lawson decided to make a concerted effort to wrestle back some of the trade they lost to middle-grade cafés, such as Starbucks and Doutor. Customers who once flocked through the door for canned coffee instead settled at a table for extended periods, with laptops, books, and a snack.

Fresh coffee at the counter was born. Customers soon returned in search of fresh ground coffee served piping hot at reasonable prices. Other stores soon followed suit and put their own twist on things. Five years later, convenience store coffee continues to satisfy, and stores have upped the enticements. Many, such as Sunkus, now provide café spaces and matching nibbles, while Family Mart and 7-Eleven offer a variety of hot and cold beverages and snacky deals.

Most convenience stores offer the option of hot or cold in two to three sizes. Customers order and pay at the register, receive a cup, and are directed to a machine where the push of a button brings on the beverage of choice. 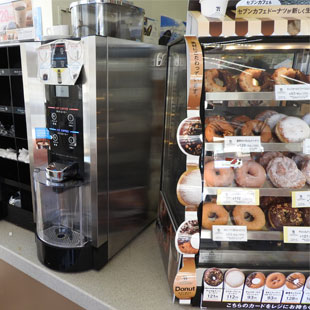 Easily the biggest importer of coffee beans, according to the Japan Coffee Association, the machines at 7-Eleven are easy to operate, and the case of donuts next to the machine is surely no coincidence.

The coffee: a lighter brew that pales a bit too easily with the addition of creamer. The donuts, as they often do, make it quite a drinkable cup. 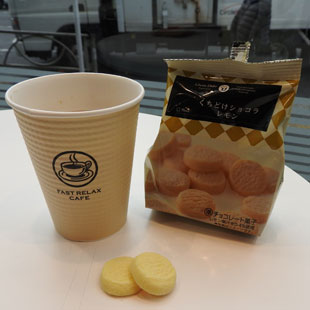 This small chain, soon to merge with the Family Mart group, offers two sizes of coffee, a bilingual machine, and a nifty little line of Café Dolce sweets. Most remarkable, perhaps, are the in-store seating areas at which to enjoy your treats.

The coffee: a solid middle-of-the-road cup that isn’t too strong or weak, even with creamer. The brew pairs well with lemon-flavored cookies. 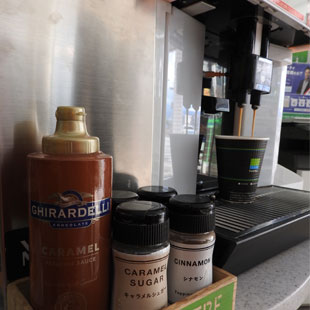 Sporting the largest menu of hot and cold beverages—everything from tea and coffee to hot chocolate—in three sizes, the Famima Cafe is in a league of its own. Machines are straightforward and a selection of syrups and sprinkles sit next to the cream and sugar.

The coffee: strong and solid enough to require two creamers, and pairs beautifully with the set of four bite-size Nut Tarts. 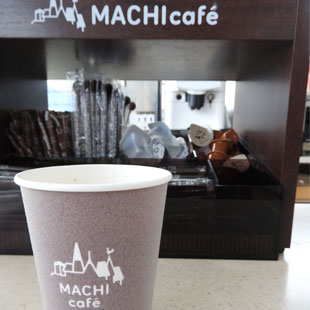 Although they were the catalysts behind this delicious trend, Lawson surprisingly keeps things pretty simple with a small menu of small and large, hot or cold coffee. Staff handle the button-pushing here, leaving customers plenty of time to choose something from the Machi Café line of sweets.

The coffee: smooth and strong, making it a close second to Family Mart, especially when sipped between nibbles of chocolate brownie.