Hike through Niigata with abandoned animals

As autumn arrives, it’s a perfect time to venture into the great outdoors—such as the beautiful forests of Fusube, Niigata, where furry four-legged friends await with tails a-wagging to join you on your trek.

Animal Friends Japan (AFJ) is a Niigata-based shelter that claims the biggest population of animals rescued from Fukushima in the aftermath of the Tohoku disasters of March 11, 2011. 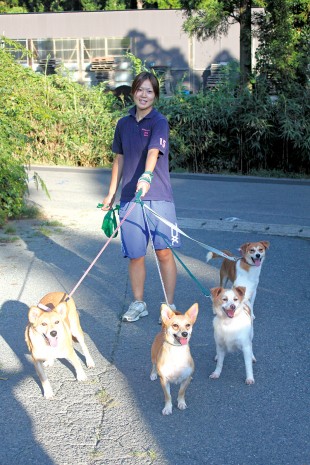 “We’re located about 200 kilometers from Fukushima,” says Isabella Gallaon-Aoki, founder of AFJ, which started as an animal hotel and small shelter in 2008.

“As we’re the nearest shelter, the evacuated families called us and asked us to go there and rescue their pets,” she says. That marked the beginning of the facility’s population explosion. “Every day, we transported 20 to 30 animals to our shelter.”

Before long, the shelter had received 700 new inhabitants—cats, dogs, rabbits and chickens—all from Fukushima. “Since then, our duty has been to take care of them and try to relocate or reunite them with their families.”

Three years later, only 20 pets have been able to return to their previous owners, and a few hundred have found new families. 450 animals still call AFJ home.

Overpopulation and limited funds have resulted in too much work for too few hands. “The ideal would be having the shelter managed by a group of 20,” says Rumi Fujikawa, who has been working with AFJ since its early days. The entire facility is run by eight staff, but there were times when there were only four.

Daily chores in the shelter include preparing food for each animal, cleaning the cages of cats and rabbits and taking dogs out for walks. With more than 100 canines, two hours of nonstop hiking per person still only allows a 10- to 15-minute walk per dog. “If there were more people, each dog could enjoy more time outdoors,” explains Isabella. 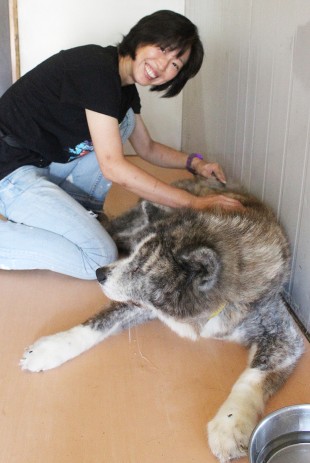 With this in mind, the shelter welcomes volunteers year-round to come help walk the dogs. It even provides a nearby apartment to host those coming from other cities free of charge. For animal lovers who can’t make the long-term commitment of fostering, visiting these dogs and cats is an excellent way to spend quality time and brighten their day—and yours.

If you can’t make it out to Niigata, AFJ holds adoption events one Sunday each month at the Farmers Market in front of the United Nations University in Aoyama, where visitors can see the animals up for adoption and learn about other ways to get involved.

“We’re moving forward, but at the same time we have huge financial hurdles to overcome,” Gallaon-Aoki admits, and the shelter is always in search of donations and fundraising assistance. AFJ also operates an animal hotel with a pick-up service for pets outside of Niigata, with 100 percent of the hotel’s income used to fund the shelter.

For more information about upcoming adoption events, or to learn more about volunteering and donating programs in AFJ, check its websites:

Who’s a super good boy, then?