emulsion is a Japanese electronic music entity which has been active in Tokyo’s underground music scene for more than 10 years. Metropolis spoke to Mika-R, one of the members of the band, ahead of their show on May 25, which will be showcasing Tokyo’s underground music by bringing some bands from the scene together. She shared her thoughts about the band’s music career and views of the city’s music culture.

Metropolis: Could you tell us a bit about the band?

Mika-R: emulsion started as a jam session band which initially had around 10 members. All of the members used to come to a rehearsal studio with lots of alcohol and played together all night. Some of them were amazing at their instruments, we were obsessed with playing irregular meter music. I think it was sort of a community rather than a band performing at musical venues. That’s how I met Shina-G actually, he was also at a nomikai (drinking party) after the session once and only two of us remain now.

M-R: I like electronic music such as drum and bass, techno, IDM, bass music and progressive music whereas, Shina-G is into more of garage music such as Sonic Youth and Dinosaur Jr. Since we are a live band, we would like to entertain the audience. Our aim is to be pop, new, and more importantly, be the band that sounds familiar but no one has ever heard before. We challenge ourselves to balance out between pop and originality. We could be an extreme progessive band but I believe that’s not what the audience wants to see.

M: Have you thought about bringing a drummer into the band?

M-R: No, we are not looking for a regular drummer right now. All of the members had their jobs and family so the band kept changing its form as our life stages changed. Also it is very hard to find a good drummer because there were not many amateur drummers or they were already taken for other bands. We play at cafes or bars as well as live venues. It is convenient for us not to have a drummer if I am being honest. But we’d like to work with any cool drummer or percussionist if they fit our rhythm tracks.

M: There have been many changes to this band in the last ten years, but you two have managed to keep it together. How is that?

M-R: We have never wanted to be a copy band. We love creating our own sound. There is always perfect and ideal sounds playing in our heads and what we are trying is getting it out of our heads. Although me and Shina-G are not always into the same kind of music we know what we don’t want to do. I think that is why, as the name of our band explains itself, our band produces extraordinary sound and we are still here, challenging ourselves to make new sounds. 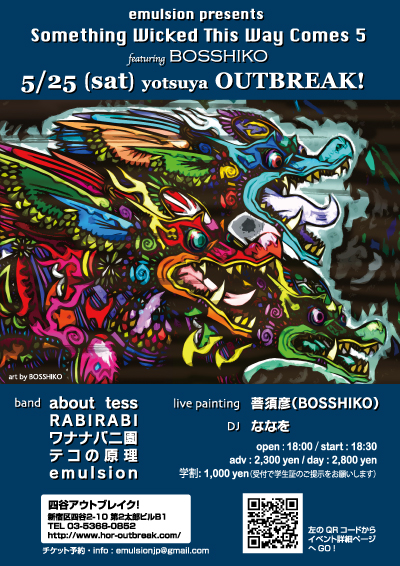 M: I personally find it hard to be involved in the underground scene, how would you describe the scene in Tokyo?

M-R: That’s a good question. These days it is so easy to find out everything we want to know online, I feel like there is no unexpected encounter anymore. For example, when we go to see a concert, we already know what we are going to see even before the concert. However, it wasn’t easy to get information without the internet 10 years ago. So local CD shops like those in Nishi-Shinjuku became the community hubs where people could engage with information. People came to these shops not only to buy CDs and vinyl but get flyers, explore new music and meet DJs. Sometimes I went to Liquidroom when it was still in Shinjuku; there was long stairs at the entrance, I still remember I was so excited as I was going up those stairs, wondering what they might show me. Now everything is online and it’s easy to dig into what we already like, while we’re less likely to encounter what we don’t know yet.

M: Which venue do you usually go to?

M-R: I love Shibuya’s CONTACT and CIRCUS TOKTO. I always go there for clubbing. As for concerts, Yotsuya’s Outbreak, Shinjuku’s WildSideTokyo and Ikubukuro’s Chop are really good venues. Especially, Outbreak hosts a crazy event called “Sunday Comes Twice” which starts at 5am and finishes at 11am. Even if you have a nap afterwards, you still have Sunday evening to enjoy. Those venues are on a mission to revive the city’s music culture. I’m sure they will always entertain us with their own intriguing lineup.

M: What can we expect for the upcoming gig?

M-R: There will be five bands from Tokyo’s underground music scene and also be a live painting artist from Osaka. They all play different genres of music and I believe that they will never be together again. It would be a rare opportunity to see them all in one night and from the beginning till the end, you can enjoy this crossover of Tokyo’s outstanding culture.