A fun way to leave a room

In life, there are few occasions when being handcuffed is a desired choice. Kinky thoughts aside, the only other acceptable answer is a live escape game, where constraints are often a means to an end. Finagle your way through puzzles and obstacles as you try not to crack under pressure. Sure, you may think that you’re a wiz at standard video game fare. But can you survive the real thing?

Originally a popular video game genre, escape games shifted from the couch to the live arena around 2008, and are currently considered the fastest-growing in the themed entertainment industry. There are about 3,000 rooms worldwide, with some European cities having up to 30 venues. Most web historians agree that the first live action escape game was pioneered in Japan. However, despite these roots and an obsession for the video game scene, live escape games remain rare in Japan and have yet to see a surge in popularity. 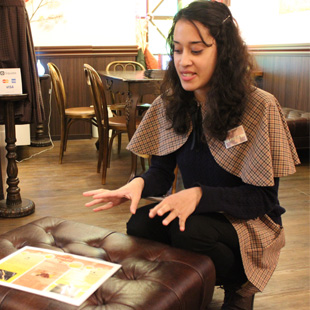 The premise of live escape games is simple, yet the actual game is not. You and your cohort of pseudo-prisoners are stuck in a room with the goal of, more often than not, escaping it before time runs out. Using deductive reasoning, magical brain power, and math skills drummed up from high school, you must discover clues and solve a series of puzzles in order to obtain your freedom. Everything in the room becomes potential fodder as clues are not evident, even if they are in plain sight. Most players end up tearing up the space like deranged bulls. Puzzles tend to get more challenging and frustrating with each success, and can involve codes, numbers and letters, keys and locks, and maps. A moderator, channeling Big Brother, watches from outside the room and keeps track of time. Depending on the venue, they may or may not provide help.

My own escape game resume includes ventures in Malaysia, Slovakia, and Slovenia—yet I have only successfully escaped once. On a level considered easy, my teammates and I had crawled, screaming through a tunnel, as a terrifyingly loud alarm blared to indicate that we were seconds away from losing, and thus “exploding.” Hardly anything to brag about. In the other games, the near misses were frustrating but only fueled an inner fire: that I could do better.

Luckily, I found the chance to redeem myself at Escape Hunt, the only permanent escape game venue offered entirely in English in the Tokyo area. A popular franchise with branches all over the world, Escape Hunt opened locally in August 2015 and offers two rooms based around the themes “Runaway Bride,” “Samurai Espionage,” and “Zen.” (All include their own Japanese-themed subplots.) Games have a time limit of 60 minutes. Two to five people are permitted per room, but you’re welcome to bring a crowd and compete against each other in the “twinned” rooms. 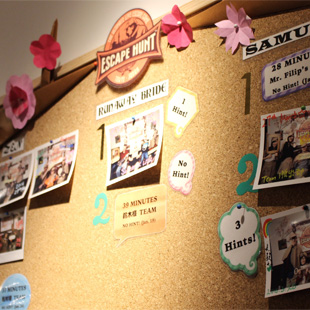 We decided to take on the “Samurai” room, with its promise of puzzles within puzzles and the goal of protecting a shogun from assassination. Dressed for success—detective costumes—we were ceremoniously locked in and left to our own devices. Though I cannot reveal anything about the actual room, we found it challenging but not impossible. Compared to other escape games out there, our moderator was not intrusive. Instead, players at Escape Hunt can request hints by pushing a buzzer, upon which the moderator comes in and clues them in. But with each hint, you lose a minute. Needless to say, we failed, even after buzzing twice. The shogun was thus assassinated and, in shame, we all committed mental seppuku (belly-cutting). However, the staff at Escape Hunt brought us back to life with tea and snacks, post-failure. We also took home a free photo, sporting our game attire and sad expressions.

Pity party aside, the hospitable service at Escape Hunt Tokyo is enough to lure us back, especially with the promise of new themes in the near future. As the games are tailored for a truly Japanese experience, tourists and residents alike will enjoy being immersed in the story lines. Escape Hunt Tokyo is a unique way to bond with your friends and, quite literally, a great escape from the chaos of the city.