[Special Promotion] With its bold, lavish, and dramatic Broadway-style productions, Takarazuka Revue has been delighting audiences in Japan for more than 100 years. The all-female musical troupe has brought to the stage adaptions of Western novels, musicals and movies as well as Japanese works and original stories, entertaining 2.5 million people each year. Notable works, created by the troupe’s creative staff, include adaptions of Madame Butterfly, Pride and Prejudice, Guys and Dolls and Casablanca.

Founded in the city of Takarazuka, Hyogo Prefecture, in 1913, the troupe was the brainchild of Hankyu Corporation President Ichizo Kobayashi, who thought performances would boost his company’s train ticket sales to the city. He decided on the style because of the growing popularity of Western song and dance shows.

The concept of an all-female troupe, meanwhile, was the result of his feeling that the all-male Japanese classical drama kabuki (which took shape when women were banned from the theatre) was old-fashioned.

The troupe was well-received and, only 10 years later, had earned sufficient money from takings to build its own theater in the city. Today, it also owns the Takarazuka Theater in Tokyo, where show attendance is said to be about 95%.

The concept is a key reason for the revue’s popularity; it is estimated that 90% of the current audience is made up of women who, theorists believe, are drawn to the performances because of the issues raised about gender roles.

The prestige of Takarazuka Revue is so great that every year thousands of young women apply to join. The successful entrants train together before being divided by the faculty and troupe members into those to play the male parts (otokoyaku) and the female parts (musumeyaku; literally daughter’s role).

From period dramas to contemporary music hits, the revue is characterised by energetic shows and intricate, visually attractive sets. Finales are a spectacle in themselves, with extravagantly dressed actresses moving down a lit, stage-wide staircase to join the entire troupe for the final curtain.

For its first performance of 2017, Takarazuka will turn its attention to Bollywood with an adaptation of the 2007 Indian supernatural romantic musical film Om Shanti Om: Endless Cycle of Love, an adaption of a masala musical classic.

Set in the 1970s and 2000s, the story pays tribute to, and pokes fun at, the Indian film industry. While focusing on the idea of reincarnation through one man’s unrequited love for an unfortunate woman, Om Shanti Om explores the full range of human emotion: from joy to grief; love to revenge. Now, to appeal to international residents and tourists, the revue is offering discounted tickets to non-Japanese guests for Om Shanti Om.

To celebrate this new and vibrant performance, Hankyu Corporation is also offering spectators a special discounted ticket and free show program in exchange for completing a short questionnaire about the show. 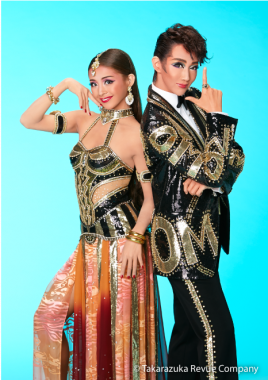 Rhythms of the Caribbean