Since the days of Aesop’s fables, talking animals have been the storyteller’s best friend. Disney’s Zootopia is the latest addition to its roster of comedies featuring anthropomorphized critters in leading roles. But it’s more than that: Zootopia is also an intelligent statement on how bias and prejudice have become so intrinsic in our world, and explores these themes with humor and charm.

Clark Spencer and Jared Bush, the film’s producer and co-director of the film talks to Metropolis about the creation of Disney’s mammalian masterpiece.

How did the idea of the city come to be? 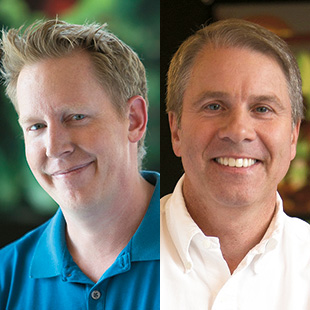 Jared Bush: Originally, Byron Howard—one of the directors—wanted to do a movie about talking animals, since Disney hasn’t done one in a really long time. He pitched the idea to John [Lasseter] and loved the idea, but said, “We need to find a way to do talking animals like no-one has done before.”

I joined the project about four and half years ago, and [Zootopia] was originally going to be a spy movie. The first two minutes was going to be set in this city, with an animal, and then it’d move to a tropical island. Then everybody was like, “Wait a second, the city is the neatest part about this!”

Did the the concept of the city evolve with time?

JB: We started off with a year of extensive research. We tried to figure out how this city would be designed, what types of animals would be there, and how they will coexist with each other. During the research, we learned that in the natural world, there are 90 percent prey animals, to 10 percent predators. We thought that was a juicy statistic, so we started building the world around that concept—what the rules of the world would be—and it became very interesting to make the connection between the animal world and the human world as we know it now, and how we live, and what kind of preconceptions we have on one another.

Clark Spencer: One of the important things that John Lasseter kept reminding us is, “Remember, these are not humans in animal suits.” The animation team really had to study each of these 64 different species, learning about behaviors that are unique to each of them, how a rabbit twitches their nose, how elephants use their trunks as an arm, etc. Each one of those things had to be incorporated in a way that feels natural, so that we’re not confused as humans watching them, but [it] still has the natural animal quality to them.

The chemistry between Judy Hopps and Nick Wilde really drives the momentum of this film. How did this dynamic duo come about? 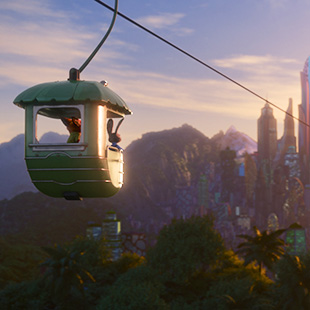 The world of Zootopia
(Photo © 2016 Disney. All rights reserved.)

JB: We wanted the audience to fall in love with the relationship dynamics [between the two characters]. It’s not a romantic relationship; this is between two friends. So we looked at a lot of friend dynamics; we had a look at Mulder and Scully from The X-Files, and [Sherlock] Holmes and Watson at early stages. It’s a buddy-cop-y movie, so the characters [have] got to have this sense of mutual respect, and are able to make fun of each other.

For me, it was really important finding an interesting character dynamic where they can both evolve and both learn. What was really important is finding a way where Judy’s optimism allows her to ultimately succeed and win Nick over, and how Nick’s cynicism allows her to get a glimpse into complex, real-world problems, and how often this comes from within us. Had Nick not come into her life, she never would have figured that out.

How did this translate with the casting?

CS: We tend to want to cast people that are like the character in real life … and we oftentimes say to the actor, “Just be who you are.” We thought someone who plays Judy needs to be pure of heart and is completely optimistic, and Ginnifer Goodwin really embodied that side of it. Jason Bateman’s character, Nick, on the other hand, is cynical and will say things that aren’t always the nicest thing in the world. Jason Bateman has the ability to say anything, and you still like him! We kept that criteria when getting people to do their voices—around the world, not just for the U.S. version.

What were some of the challenges of directing and producing the film? 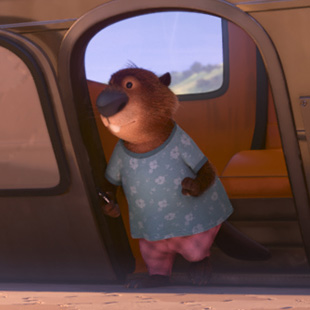 CS: For me, it was the scope and size of this endeavor that was the most difficult and complex part. We wanted “scale” to be the big important part of the film. For example … a mouse is 95th the size of a giraffe. So how the layout artist and cinematographer do a scene with a mouse and a giraffe becomes really complicated. You also have to have think for the city to have doors, cars, and streets for different-sized animals, which became a fun but really complex process. As a producer, you start to think, “Well, can we actually do this?” We need to create technology that’s never been created before to make the furs realistic, we need to be able to create these environments, to animate this entire film. All of these things became challenges, but we all stayed together and figured it all out in the end.

JB: Over the course of making the movie, you try many different versions of the story. Writing-wise, I have literally 1,700 drafts of the film saved onto my computer! You try to find the best ways to tell interesting stories that will hopefully resonate around the world, and that could be very challenging. We decided that we wanted to do a story about bias, as it’s been such a consistent problem around the world. The biggest challenge was how we do that in a way that doesn’t sound preachy: how do we create a film that’s entertaining for adults, kids and everybody but at the same time touches on the issue that’s very difficult to talk about? I think, to me, trying to work out that balance was the most difficult part of directing this film.

What do you hope viewers will take away from this film?

JB: I love that Judy, as a character, believes that anyone can be anything, and she’s going to go out there and chase her dreams to be who she wants to be. She then hits a major obstacle, but she doesn’t stop trying. She continues to looks at herself differently to improve and maintains that optimism which is critical.

What I want people to take away from this is the message that if you have a dream, you have to pursue that dream relentlessly, if you ever hope to make it come true. At the same time, [to] be aware of the world you’re in and learn from its surroundings.

CS: I agree with Jared. There’s an amazing line in the song “Try Everything” where the lyric goes, “Birds don’t just fly; they fall down and get back up.” I though that really epitomizes what this movie is. We all have these wants and these dreams of life, and it’s too easy to let the world tell us that it’s not possible. We shouldn’t let that be the case; we should define who we are by ourselves. That’s something that I want the audience to take away after watching this film.