Tales from a thumb-wielding traveler

At 9am on a Saturday, the first people to pick me up were a father and daughter on their way to a matsuri (festival). The daughter—not driving—ceremoniously pulled out a bottle of whiskey and a cup of ice from the cooler next to me and asked, “Kampai?” Being a polite guest, I naturally obliged. And from here, the shenanigans commenced. 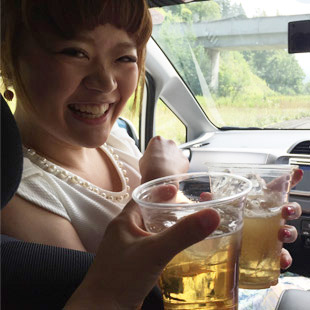 Though drinking while hitchhiking was a rare first for me, the lift itself and number of good-natured passengers were not; all of which I readily encountered during a solo journey around Hokkaido last summer. Relying only on the kindness of strangers, I was dined with at cafés, offered couches to sleep on, and accompanied on tourist ventures, developing unlikely friendships along the way.

For most people, hitchhiking is seen as a reckless activity, resplendent with tales of kidnappings and murders, a la Ted Bundy and Wolf Creek. As a solo traveler, and especially being female, hitchhiking is considered the least-preferred choice, no matter the situation. News reports and online commentary reek of victim-blaming when an unexpected or “deserved” tragedy occurs. The masses cry: “Why would anyone put themselves at risk?” And, “Aren’t you totally asking for it?”

While some of these claims are justified, and people should approach any such endeavor with caution, I believe that hitchhiking is sorely misrepresented.

My foray into this taboo hobby started during Golden Week in 2008, with a charity hitchhike around Shikoku. My male coworker and I set off with the kind of early-20s gusto and naivety that assured ourselves that nothing could possibly go wrong … and it didn’t. We returned to our jobs a week later, unscathed and unafraid of the prospect of future strangers. Not only did we raise money for a good cause and discover secret pockets of Shikoku; we did so in the company of strangers! Twenty hitches took us from Point A to Point B, and we never waited more than five minutes to be picked up. It was easy and invigorating.

Eight years have since passed, but my love for hitchhiking remains. It’s taken me on rides around Canada, Slovenia, South Africa, and Chile. Japan, with its low crime rate, politeness, and eagerness to speak to foreigners, is especially receptive. I have hitchhiked in Japan over a hundred times now, and never once felt scared or uncomfortable. Sure, there have been a few odd passengers, like the lady who wanted silence so she could chant nonstop for an hour. But I have enjoyed the company of couples, babies, students, dogs, retirees, delivery men, champion athletes, and a sex doctor. These strangers have restored my faith in humanity; they’re unknowing teachers, storytellers, and tour guides. 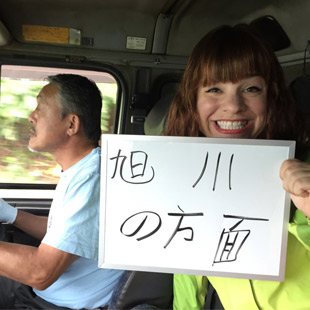 People often say that I’m lucky and, if I continue to hitchhike, will inevitably end up chopped into little pieces and stuffed into a dumpster. But it’s not luck; strangers are innately good. I’m also well aware of the restrictions I’m told to feel as a woman—how traveling this way is frivolous, and that if I were a man, it would be more acceptable. Yes, I may have a bigger target on my back as a woman, but confronting it helps me set an example for my students and women in general. I enjoy the freedom of the unknown and take the risks as an opportunity to grow.

Still, hitchhiking must be accompanied with vigilance. I’m not condoning hitchhiking in risky places or where it’s illegal. Furthermore, there are certain safety precautions one should take: avoid hitchhiking alone, unless you’re experienced and confident about the safety of the area; never hitch at night; and consider taking pictures of license plates as you walk up to the car, or find a way to get a picture of your driver, then send as much information to a friend as possible. Above all, exercise common sense: do not get into a car if you feel something is amiss—trust your instincts.

With a little courage and preparation, hitchhiking may be the spontaneous adventure you’re looking for. To me, life is about accumulating good stories, and there’s no better way to journey between destinations, meet interesting people, and even practice language skills than standing by the side of the road wondering what story will pull up next.