Journalist Shiori Ito did not have sufficient evidence to file a criminal case against her rapist Noriyuki Yamaguchi. Yamaguchi must pay an amount in damages but, without proof of violence or intimidation, or of total debility on the victim’s part, he can’t be deemed a criminal.

Ito’s story still rankles Japan’s national conscience, but quietly compared to the widespread activism surrounding #MeToo in other countries. Not only does the structure of Japanese civil society curb large demonstrations, but an attitude of reluctance runs through all media—to define a position on misogyny or sexual assault, or to even approach these issues.

J-dramas especially pride themselves in being apolitical, comforting. In order to magnify people’s scuffles, and to fulfill fantasies of clean resolutions and unconditional love, it’s necessary to diminish the ugly realities of, say, being a woman in Japan.

HodoBuzz, a new miniseries on Amazon Japan, represents misogyny with refreshing honesty. We see the way common attitudes towards women manifest in the Japanese journalism and media spheres. It’s a plus that the industry struggles and the plain—but never overstated—tenacity of protagonist Asuka Wada (Maho Honda) makes for a thoroughly entertaining watch. 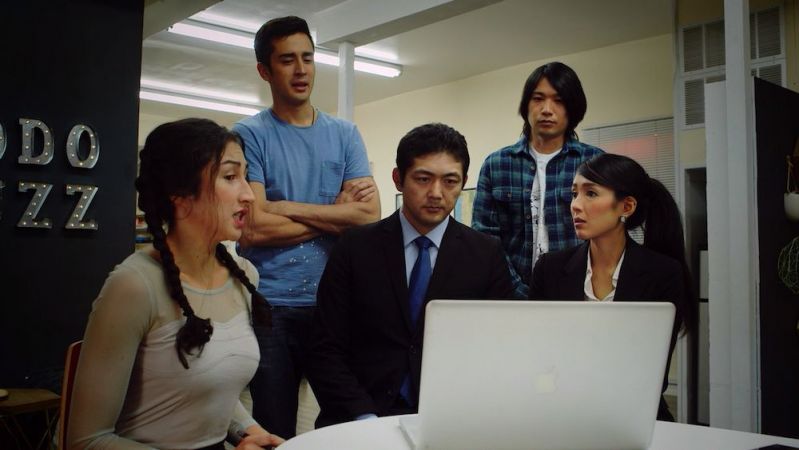 Wada has quit her position at a late-night variety show to pursue a reporting job at HodoBuzz, a digital news company based in New York City. HodoBuzz has a small team that pursues a novel type of Japanese-language “international news.” In other words, this is a job with a fresh start for Wada. It’s suggested that at her former position she was treated as just a pretty face for sexually charged material, and a certain reputation follows her into her reporting. Whether her coming to HodoBuzz was an attempt to regain “legitimacy” as a public figure, out of exasperation at the sexism she experienced on the show, or simply the desire to do something new, we don’t exactly know. “I wanted to read the news,” she explains curtly.

A woman relaying the news must look a certain way to “qualify” for the job: pleasant-looking but not ogle-worthy, gently spoken but professional enough to handle the authority.

Even her first story, an uncontroversial missing-person report, receives a swarm of online comments reproaching her as incompetent. Through the series, she does make mistakes in her journalism, but she is cunning, with a nose for investigative stories and an unusual devotion to media ethics. Though she proves herself to be an enthusiastic, creative and skilled reporter, it’s aggravating to see how she is treated at various stages of her time at HodoBuzz.

A former boss is friendly with her, but clearly doesn’t respect her as a professional. Every step in her career is assailed online: If she stays in variety TV, she’s objectified; if she stays a reporter, she’s objectified and her professionalism is assailed. The harassment reaches a fever pitch in stalking and assault. There is no right move she can make in the public eye, no way to escape the vitriol. What’s strange is that, while her appearance is a large target of the harassment, it’s also a sort of requirement. A woman relaying the news must look a certain way to “qualify” for the job: pleasant-looking but not ogle-worthy, gently spoken but professional enough to handle the authority.

Wada’s paralysis is nothing unique, though, as she later insists. This kind of treatment is just the way of things in journalism and society—and we are yet to reckon with that. One of the series’ highlights is when Wada explains an informal experiment in which a male news reporter wore the same suit on TV for a year, to no reaction. On the other hand, his female co-host—wearing different clothes every day, of course—continued to receive criticism on her looks. Wada concludes that broadcast TV tells us that women are worth only their appearances, and we see that a woman’s appearance, even one that is imposed on her, becomes an image of an entire program.

The series tackles all of this but it never comes off as didactic. HodoBuzz was produced by Derrrrruq!!!, a group of indie filmmakers. The series is evidently a smaller project, but not to its detriment. It’s surprising how authentic many of the interactions are, especially for a fast-paced, high-stakes political drama like this. Though each episode is only 20 minutes, there are moments the camera wavers on Wada’s tired face. We begin to understand how weak she must feel with the constant criticism and pressure to “redeem” herself; to prove her competence; to be pleasant and authoritative simultaneously.

Another common feature of J-drama is the easy labeling of good guys and bad guys. We can point out a couple of villains in HodoBuzz, but it isn’t that simple. Their villainy is a product of their industries, which is a scarier prospect than any single man of evil. We leave the series hopeful for Wada, but having seen yet again that misogynistic attitudes are the fabric of Japan’s real life news, entertainment and work culture. We’re left feeling that these attitudes are the real villains here, and they certainly seem like large ones to confront.

You can purchase or rent HodoBuzz (with English subtitles) here. You can also view the series for free with an Amazon UK or U.S. subscription.

Passionate about gender equality in Japan? Also check out: