Plastered front and center on the homepage of feminist collective Bae Tokyo is the slogan: “Do no harm but take no shit.” Looping behind these words is a montage of DJs (notably all women) and club-goers, a pre-pandemic scene composed of dancing youth who occasionally plant kisses on friends’ cheeks beneath pulsing strobe lights.

This sense of community is typical of a Bae Tokyo gathering. Founded in 2015, the creative agency has launched various events, many of which are centered on music and DJ culture, with the aim of promoting inclusivity in Japan and providing a platform for marginalized artists to thrive. Recently, due to rising cases of COVID-19 in the capital, Bae Tokyo has shifted its focus online, using the live streaming service Twitch to host discussions on Black Lives Matter, as well as showcase the works of women and nonbinary creators through a virtual film festival series. 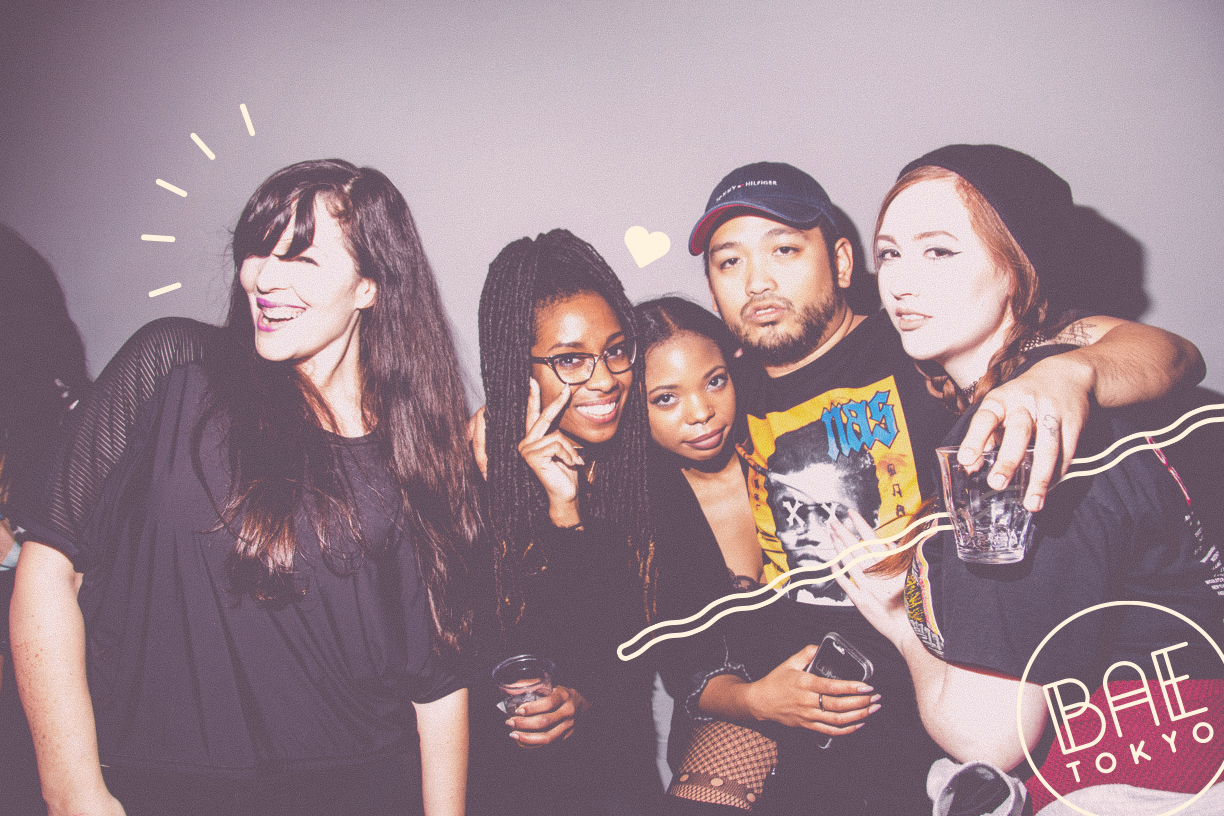 DJ and radio personality Jayda B (middle) founded Bae Tokyo in 2015 while living in Japan.

Launched in July, the film festival is part of Made By She, an event series hosted in conjunction with Tokyo and Singapore-based UltraSuperNew (USN) Gallery. It’s final installment on September 16 features director Aki Mizutani’s short film PINOKO about a woman who challenges assumptions within the pole dancing industry. The screening will take place on Twitch, followed by a Q&A with the director.

We have two Black founders at Bae Tokyo. Our whole team is women of color. So it’s always been an important mission for us, to make sure that we’re using our platform to highlight and educate and talk about these things

The virtual film series is one way the agency is expanding into new areas of art and collaboration. “A lot of the events that we’ve done as Bae Tokyo have been centered around nightlife, musicianship and live events. That’s great, but the team and I felt like that wasn’t necessarily conducive in the long-term because we had so many other ideas,” says Bae Tokyo founder Jayda B. Metropolis caught up with the DJ and radio personality in August to learn more about upcoming events, surviving the pandemic and feminism in Japan.

Metropolis: Since the start of the pandemic, artists have struggled and succeeded in transitioning their work online. As the head of a largely events-based agency, what are some lessons you’ve learned during this time?

Jayda B: Once the pandemic happened, we switched everything over to Twitch and online. Initially it was more so about reaching out to our collaborators. For the film festival, for example, with all of the producers, we had everything organized with time tables and an entire two-day film festival basically set up. The biggest challenge was not necessarily moving everything online because, thankfully, we have the USN team to help facilitate the technical issues that we may have had solely as Bae Tokyo. But because things were so unpredictable in the early stages, the difficult part was contacting the producers and collaborators multiple times, hoping that they had patience with us because we wanted to be safe, but we still wanted to do this event and build content and showcase people who we thought were talented. 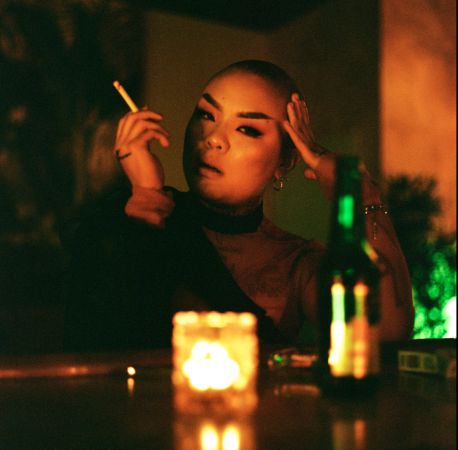 “White Dragon” tells the story of a mysterious outsider who challenges a gang to a mahjong showdown.

M: Your August installment of the virtual film fest featured Toronto-based director Jessica Wu and her short film White Dragon. How did you come across Wu’s work?

JB: One of our members is really into film. She studies film and she’s also an up-and-coming producer herself. So this was really her idea and her introduction to producing film events. I wanted her to spearhead this idea and make it happen, with me on the sidelines. I always try to give my team the foundational knowledge about the overall company, but also [ensure] that they can feel completely comfortable and confident to do whatever they want as long as they communicate with me. I just want everybody to feel heard. That’s always really important for me with the team, and just the overall mission of Bae Tokyo.

M: What themes are you looking for when deciding which artists to feature?

JB: For the film festival in particular, it still has to fall in line with the mission of Bae Tokyo. We’ve always been a platform that wants to showcase, highlight and hire women. We’ve always been that platform to talk about LGBTQIA rights, Black empowerment and Black voices — so all these things that are happening now on social media, with the BLM movement especially. We’ve shifted our content around that, as I’m sure so many companies have, but it’s always been a part of our mission. We have two Black founders at Bae Tokyo. Our whole team is women of color. So it’s always been an important mission for us, to make sure that we’re using our platform to highlight and educate and talk about these things, especially in Japan, whether we’re doing it in English or Japanese.

M: In June, Bae Tokyo held an open discussion on Twitch about race, equality and the Black Lives Matter movement. It’s been several weeks since marches in Tokyo and Osaka made headlines. What kinds of conversations are you having with your team right now regarding Black Lives Matter and the current political climate?

JB: We actually started this internal BLM resource library. It’s a long, growing document of movies, TV shows, books, articles and information about how to be an ally and about different experiences — like diaspora, being a Black American, and being mixed in Japan or somewhere else. It’s also really important for me, not only for the team but for whatever we put out and for people in general, to know that Black history doesn’t begin with slavery. Especially in America, because that’s obviously where this whole thing has taken place, it’s important that people know who these figures and icons are.

Pinoko, a pole athlete, is the protagonist of Aki Mizutani’s 2018 film.

M: In the past, you’ve described feminism in Japan as a “new idea.” Do you still feel the same way about the movement here?

JB: I think that perspective had come from my overall experience as a woman, a foreigner, and an English and Japanese-speaking person hearing both sides of the story. Seeing things from back in 2009 to where they are now, things have completely changed, so I don’t necessarily think it’s a new idea in general. I think it could still be considered new in the sense that I feel people and women in Japan now feel more comfortable talking about it, and talking about it within communities. Talking about motherhood, roles and not wanting to wear high heels at work just because you’re a woman. Or having to serve tea in the Japanese workplace, the work culture in general and what tons of women have experienced, Japanese or foreign. I do still think maybe that side of it is a new thing, to where now it’s seemingly more public, or more publicized, but of course I don’t think feminism in general is a new idea.

M: It’s been five years since you founded Bae Tokyo. Where do you see Bae Tokyo five years from now?

JB: Where we are now in the world, things, at least in the U.S., are obviously a mess and I don’t know what’s going to happen with this next election and the whole direction of where the world is shifting. But I think things need to be rethought. I think the pandemic is really going to affect us long-term. Not just in the music industry but globally, in general. So many people in the music industry have been affected, but so have other people. With myself, or talking to friends, we already had our own internal battles so adding [the pandemic] on top has really been a mental tax for a lot of people. So I think there are a lot of things we need to reevaluate. I don’t want to say “go with the flow” — although that’s not necessarily a bad thing because we don’t know what’s going to happen.

Everything has been shifting online, and it’s really great that we can have this Made By She series stream on Twitch. I love that, but I can’t help but think about the future of events and physically being in a space. Today, I saw a video of the UK’s first [socially distanced] live concert. It was an outdoor concert of course, but they had people sectioned off into their own little mini-stages. It seemed like, okay, I guess this could work. But then when you think about huge festivals or going to a large outdoor event with people mingling and meeting new people — I don’t know if that’s really going to be the experience anymore. We’re going to be shifting in a completely new direction. Whether it looks like that, where we’re all sectioned off from each other, or not, I’m not sure. 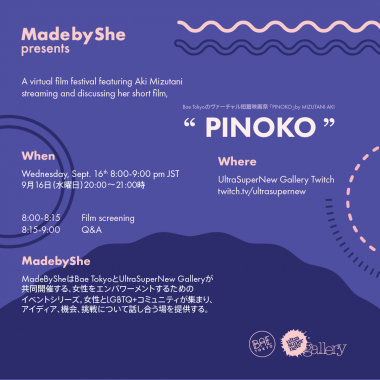 This interview has been edited for length and clarity.