Back in the 2000s, getting inked was in vogue. The term “fashion tattoo” popped up especially to identify designs free from yakuza stigma, and Japan seemed reasonably ready to accept a tasteful tattoo in an inconspicuous location. However, like all subcultures that flirt with the mainstream, this wasn’t one that could last; the 2013 closure of popular magazine Tattoo Burst signaled that the bubble had gone the way of the title. In balance, otaku culture has been on the rise: the yanki ruffians have replaced their ukiyoe custom paint jobs with Hatsune Miku—after all, this is now the best way to give a middle finger to society, even if no one could quite predict how mainstream aspects of otaku culture would one day become. 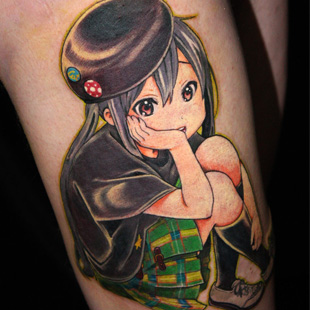 This intersection gave birth to the “otaku tattoo,” a phenomenon that has its own “Otattoo Nights” club events helmed by the biggest names in the scene: Aki, who tattoos out of Diablo Art in Yokohama; Mana from Mana Tattoo in Yokohama; Mica from Tokyo’s own Detroit Diesel Tattoo Works; and Benny at Chopstick Tattoo Osaka. The stigma of the tattoo met with the popularization of the still-stigmatized otaku culture, and has become a rallying point for subcultural forces. And arguably, there is no greater badge of allegiance to the counterculture gang.

However, while otaku tattoos carry stigma in Japan, this isn’t necessarily the case abroad, where tattoos and pop-cultural imagery are increasingly de rigueur. This makes otaku tattoos dependent on their context in Japan. Should the tide turn in the same way that made AKB48 a household name instead of something you’d hide, maybe one day you might be able to display your fandom with pride. But perhaps not just yet?

Metropolis caught up with young Tokyo-based French otaku tattoo artist Haku, to see what is bringing fresh blood to the genre, and where the scene is now. 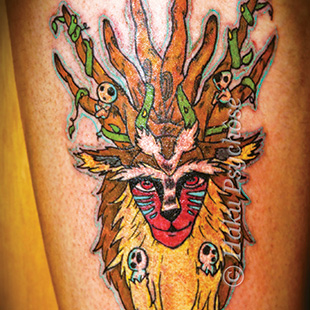 What drew you to Japan?

From as young as I can remember, I was fascinated with Japanese folklore, in particular its many mystical creatures. I loved dragons in particular; I was hooked on the tales of Yamata no Orochi, but I wanted to know more about the culture around it. It was a logical leap to modern folklore and creatures like Pokémon, as well as the mystical characters of visual-kei rock. Even now, they are the main focus of my work.

I embarked on a trip to Japan for the first time at 18 with my boyfriend, now my husband. We stayed there for around a month and decided that we owed it to ourselves to see what it would be like to live here. After several years of hard work saving up, we returned to Japan looking to stay there as long as possible.

How did you break into tattooing in Japan?

I had been tattooing professionally for two years in France. When I arrived in Japan, I actively sought a tattoo studio passionate about tattoos, the history of the art, and who aims to pass something unique to its customers. I contacted Shiryudoh in Meguro out of the blue, met the team, showed them my work, and I knew it was where I had to work. 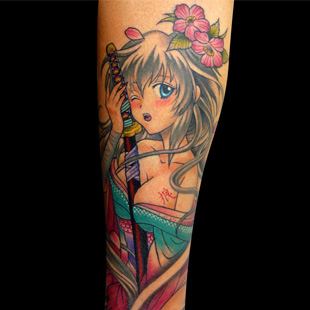 What is the difference between tattooing in Japan and France?

The difference is striking! In Europe—especially in France—tattoos are almost socially acceptable. As of 2015, more than one in 10 French people are tattooed, while in Japan, to be tattooed is a challenge to the status quo. It really affects your daily life. I think that is why, even in Tokyo, so many of our clients at my studio are foreign.

What makes an otaku tattoo?

I tend to say that global pop culture changes every few years, like fashion, while otaku—despite the emergence of new anime, video games, and other goods, the spirit and stigma—remains the same. What’s strange is that, among foreigners, otaku is part of the popular culture of Japan; but it’s more than that.

Is there a difference between how an otaku tattoo is seen in Japan and abroad?

Yes, a big difference. In Japan, otaku are not very well-received, and so too are tattoos. Mixing the two is unthinkable for many Japanese people. But at the same time, Japanese people love their manga, their anime, so it always makes me happy to know that their love for the subject is strong enough that they would make this leap to have it tattooed, knowing the cost.

Abroad,  it is completely inked in geek culture. Even in Tokyo, we have many foreign fans of Japanese animation, manga, or video games, asking for otaku tattoos. Foreigners tend to ask for large- or medium-sized pieces in the otaku style. Japanese people are more comfortable with smaller tattoos and references that are not so obvious.

Do you think tattoos are becoming more or less taboo in Japan?

It seems that Japan has difficulty imagining tattoos other than irezumi. I hope with the Olympic Games in 2020, Tokyo will see more styles that aren’t associated with negativity, and rediscover the art that has been part of this island’s history before the conception of yakuza gangsters, and runs deep in Ainu culture. Right now, I get a feeling that tattoos are more taboo than ever in Japan, but I hope this will change.