From its food to its art and history, Japan’s culture boasts a richness that is revered world-round. Back home, however, it appears that the Rising Sun is threatening to set on how the Japanese identity is passed down from generation to generation.

Aiming to preserve the nation’s culture is the Nihon Bunka Shinko Kyokai, an organization that serves as an educational hub for providing cultural, traditional, historical, and business information to those curious about the ways of Japan, regardless of where they’re from.

“At Nihon Bunka Shinko Kyokai, if people want to learn about Japan’s history and culture because they haven’t been taught these things, we provide a place for them to do so,” says Mr. Amemiya, founder of the organization. “We teach people about everything, including Japan’s historical, ancient folk tales, and we recount experiences from the past over sake—an activity that’s very Japanese.” 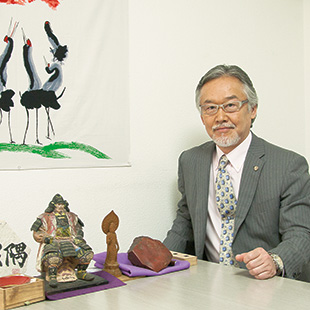 According to Amemiya, the Tokyo native’s passion for Japanese culture—and educating people about it—stems from his youth, when he worked as a jeweler at a company reputed to be the first to bring Russian diamonds into Japan.

“Jewels are a final product, coming from volcanic rocks that underwent processing with heat,” states Amemiya, who explains that the jewel-making process led to his taking up mineralogy.

“The more I learned about minerals, the more fascinated I became with the Japanese archipelago—a volcanic archipelago, where each hot spring develops in accordance with its environment. Because mineral components differ with each environment, each hot spring is said to heal a different body part or problem from another hot spring; their efficacies are different.”

His geological research brought Amemiya to the topic of folk tales and their relation to Japanese topography. Amemiya specifically recalls that of Hanasaka Jiisan, an ancient story about an old couple who grieves the loss of their dog, Shiro. Appearing in a dream, Shiro tells the pair to sprinkle the ashes from his burned mortar over certain dead trees. Once the old couple does this, the trees come back to life and blossom into vibrant cherry trees that catch the eye of the passing feudal landlord, who rewards the two with gifts.

“Those ashes were in fact minerals; they were coals made from trees. Old folk tales also taught people about these things; the deeper you dig into Japanese culture, the more interesting things you will discover.”

Amemiya also states that the art of Japan reflects its heritage—in craft, rather than in style.

“Japanese people have a tradition of passing on crafts,” he says. “For example, if a child watched his father create a statue, the child would try to improve upon that and put in the effort. If the father started from zero, he could only improve as long as his lifespan allows; the son would then take over and try to better that craft, then pass it on to his child. The craft would then continually grow. That’s how Japanese art has evolved and grown, regardless of media.”

The transmission of art and culture is important to instill a sense of hokori—the Japanese’s own definition of pride.

“In Japanese, ‘pride’ is technically translated as ‘hokori,’ but I think those two are different,” states Amemiya. “‘Pride’ is more about the self—it’s an individual pride. ‘Hokori’ is more about your pride of ancestry—that of your mother, your father, carried over to you. It’s the feeling of, ‘I shouldn’t do bad things so I don’t shame my parents.’ It’s not about hurting the self, but more about hurting the connection with your ancestors. That’s what hokori is.”

The world is becoming more culturally mixed, but Amemiya affirms that Nihon Bunka Shinko Kyokai is a place where hokori can transcend nationality, uniting people from all ethnicities and races over their shared love for Japanese culture.

“We have to share the beauty of Japan with Japanese youth, of course,” Amemiya says with a smile. “But also explain what it is to foreigners with an interest in Japanese culture, in a way that’s easy to relate to.”