Shamisen, haiku and taiko to go with your bento

It’s a gloomy Saturday evening in autumn. Huddled under a flimsy plastic umbrella purchased last minute at Family Mart, I clamber up the twisty hills of Kagurazaka, trying to seek shelter from the sudden downpour. There’s something to be said about a rainy night in the city. While neighborhoods such as Shinjuku exert a sense of never-ending restlessness with their crowds of on-goers and technicolor billboards shining more brightly in the rain, the streets of Kagurazaka appear to be on the cusp of a gentle, comforting lull. Like a scene straight out of a 1940s romance film, the rainy haze that descends upon the warm glow emitted from the swaying lanterns, dainty traditional handicraft stores and shiny cobblestones is enough to put anyone into a melancholic trance.

Just as the rain begins to worsen, I turn the corner and see it: hidden in the backstreets, behind an unassuming white curtain and bamboo fence, Shamisen Bar Ajisen. Within, a kimono-clad hostess sits and greets her guests with practiced care. It seems like a small eatery with only a narrow seating area, but the tatami flooring leads to a makeshift tea room in the back, where the magic happens. 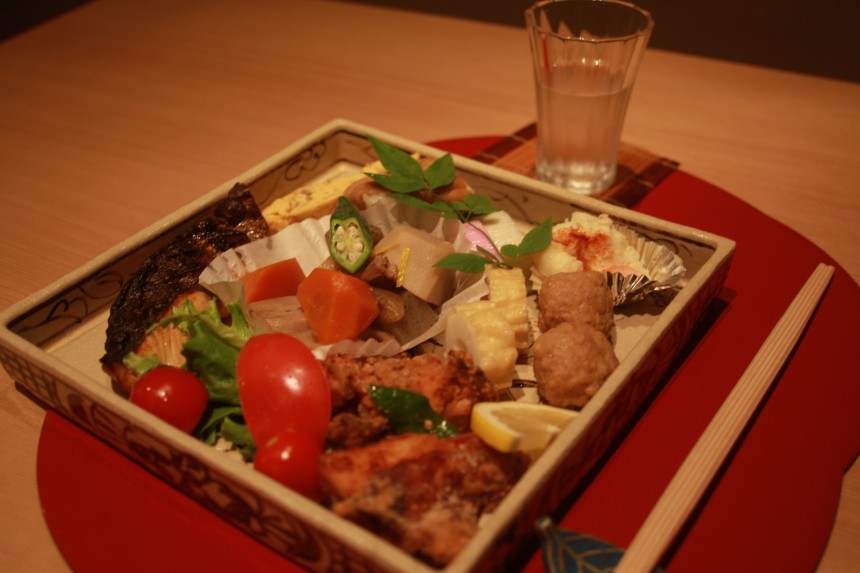 Here, diners can enjoy a traditional bento box meal while being treated to a front row shamisen concert. As tradition dictates, the performance is often accompanied by a haiku recital, small taiko drumming and dancing. On this particular night, the live show additionally featured a guest speaker who gave a commentary on each piece they performed. With nothing but a curved wooden table separating the diners from the performers, Ajisen presents an intimate window into tradition and history. 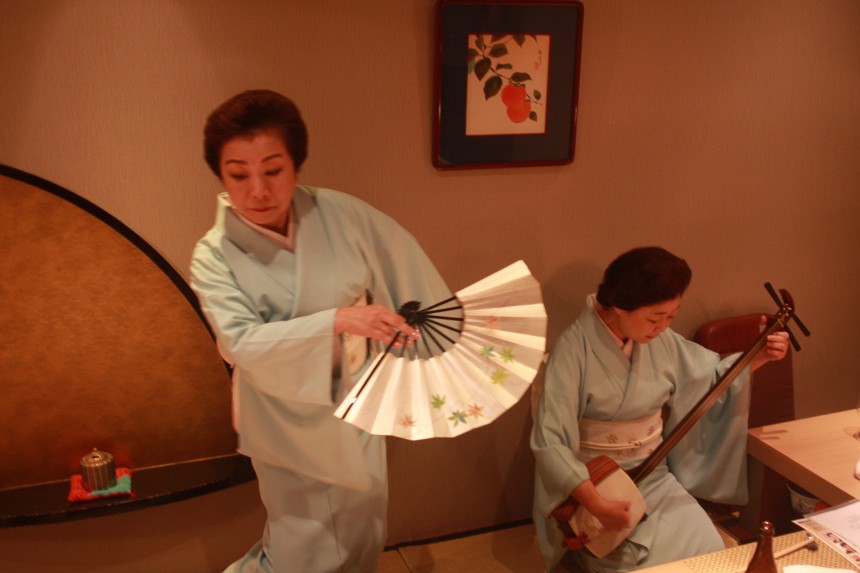 Like most izakaya, the unofficial demographic that frequents such establishments is that of the Japanese business man over the age of sixty, with thinning hairlines and sonorous sneezes. At Ajisen, the diners refer to each other as sensei – a title which decrees one’s reverence within their profession. These sensei and their companions (with their interactions with the gracefully polite hostesses) definitely add to the traditional vibe of the restaurant. As a foreigner, it may be slightly challenging to adjust to the exclusively-Japanese environment. Yet, you’ll find that with some knowledge of common manners (e.g. bowing and offering to pour sake), the people there are open to forging new friendships. If you’re brave, you may strike up a conversation with eccentric diners such as “Japanese Gandalf”, a customer whom I’ve nicknamed as a homage to his short but intimidating stature, glorious beard and impressively large walking stick (which might have well been a magic-wielding staff).

In a society that seems to rapidly change, sometimes what we need is to stand still. To immerse yourself in a world where time and words lose all meaning — where nothing takes precedence but the delicate, percussive hums of a shamisen.