An unusually hyperactive hubbub fills the somewhat characterless space of Shibuya’s WWW X. Laughter and chatter with an air of freaky holiday fills the black space above the full-to-bursting crowd, echoing back to them and feeding their excitement anew. The carnival atmosphere makes it clear that something special is underway: Kikagaku Moyo are coming home. The Amsterdam-based Japanese psychedelicists do not appear on stages very often in their country of origin, meaning that tonight, the first of just a handful of Japan dates in 2019, is a red letter event for the hip beards and Laura Ashley dresses that make up a large proportion of the lively, celebratory crowd. Whether the world-citizens and internationalised heads that make up the band truly consider it a homecoming, or just another stop on their own never-ending tour, is perhaps a moot point: Tokyo has been waiting, and now the wait is almost over. 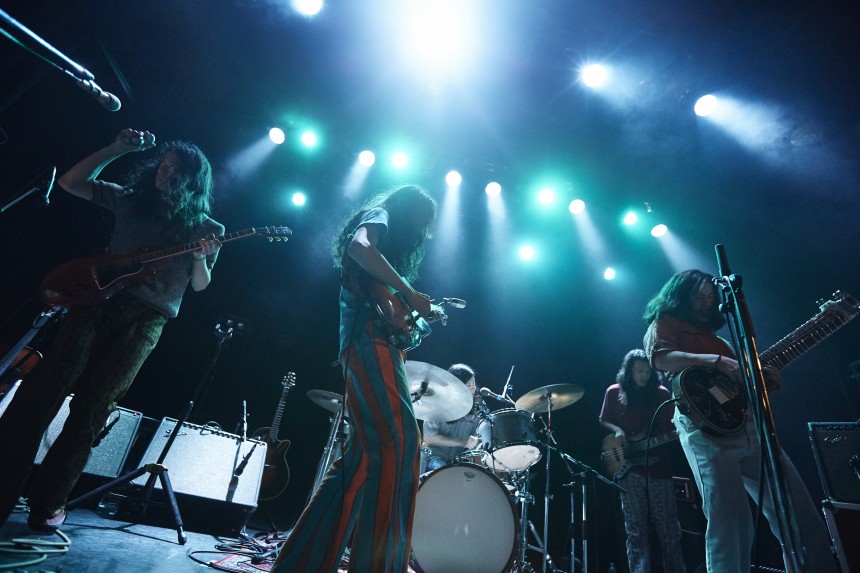 Before the main event, there is a prelude in the form of special guests Ogre You Asshole. At just slightly later than the advertised 6pm, the ambient BGM (a blood pressure friendly blend of synth and Alpine cowbell) gives way to a jumbo jet roar, and the memorably-named Nagano pop experimentalists are revealed in smoky pink columns of light. Having made an entrance, they start their set proper with “Black Window” from their 2012 album 100 Years Passed. The late-night bass and almost Balearic JJ Cale-like guitar make for a hazy and mellow introduction to the evening’s proceedings.

The rest of the set, a pic ’n’ mix of songs from 2007’s Alphabeta vs. Lambda, 2011’s Homely, 2014’s Papercraft and this year’s New Kind of Man, features much motorik grooving and artfully shambolic guitar, that in it’s dirtier moments brings to mind the heavily-medicated-funk of Happy Monday’s Mark Day. The vocals of frontman/guitarist Manabu Deto are occasionally extended just slightly beyond his reach, but always have a wide open charm that make the stretches easy to overlook. On the Gorillaz-play-Roxy Music “Me and your Shadow” and the INXS-meets-“West End Girls” robofunk of “Rule Invisible” his melodies resemble the more laid-back efforts of Yura Yura Teikoku’s Shintaro Sakamoto, perfectly meeting the sparse propulsive groove of the band.

By the end of the final track “Rope”, the crowd, although good humored and appreciative, are growing slightly restless. They send the band on their way with much heartfelt cheering and applause, but their minds are on what’s coming next. On any other night Ogre You Asshole would be a (headline) act to savor, but tonight they are the vegetables that must be eaten before the sweet and sticky psychedelic pudding can be put on the table.

Kikagaku Moyo: five men with enough hair for 25, amble on to the stage looking like nothing so much as the wilder contingent of an early 70s archeological dig — which seems apt when considering the crate-digging origins of their sound and the reverence they so clearly feel towards their musical ancestors. There is a free-wheeling easiness about their body language that seems slightly at odds with the sense of occasion felt by the audience, but comes across as the natural confidant demeanour of globetrotting musicians who have played the best part of 100 gigs this year alone. 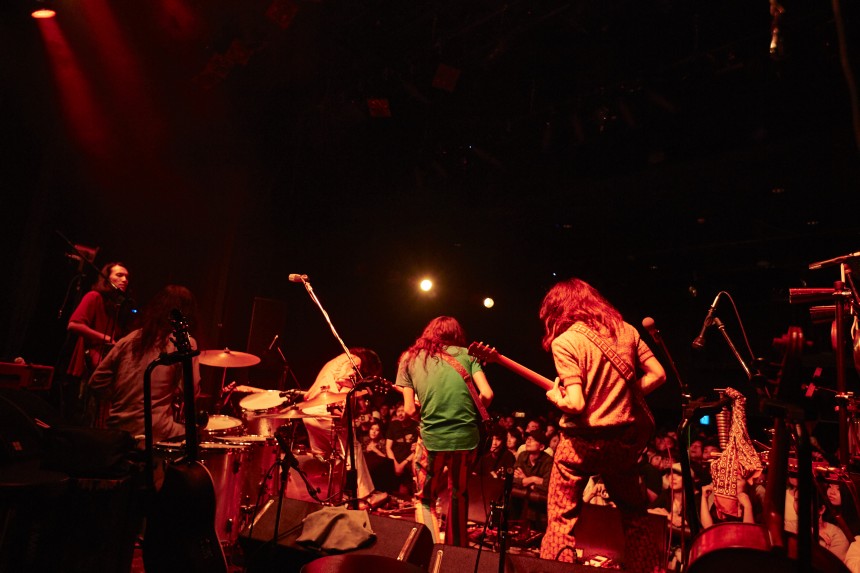 The band’s admirable ability and willingness to head off in new improvisational directions, means it is not always clear when one song ends and another one starts, or even exactly which song is being played at any one time. But somewhere along the way, the morning reverie is disturbed by a wind tunnel groove where wah wahs meet Jaki Liebezeit drumming, and an urgently pulsing bass line threatens to overturn the whole thing. When the storm passes, the cyclical twinkling guitar lines of “Kogarashi,” atmospheric relatives of the quiet still moments found on Tom Paxton’s Beautiful album How Come the Sun, are all that remain. 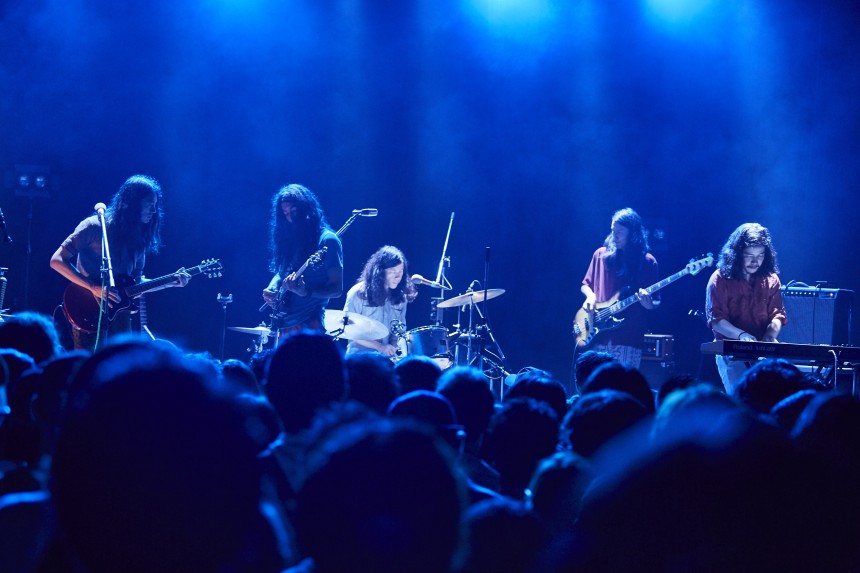 Other highlights include “Entrance,” “Dripping Sun” and “Gatherings” all from 2019’s funkier, more hard edged Masana Temples. “Gatherings,” which ends the main set, is another case of the band choosing a pleasant starting point and then heading off on a massively inventive mystery tour. The song’s skittering rhythm soon heads in a reggae direction, and the introduction of cavernous dub echo and heavily distorted riffs mean that the general impression is of Sabbath with Tubby at the controls. The whole thing draws to a joyous cacophonous close and the band makes an (unconvincing) withdrawal from the stage to unrestrained cheers and applause. 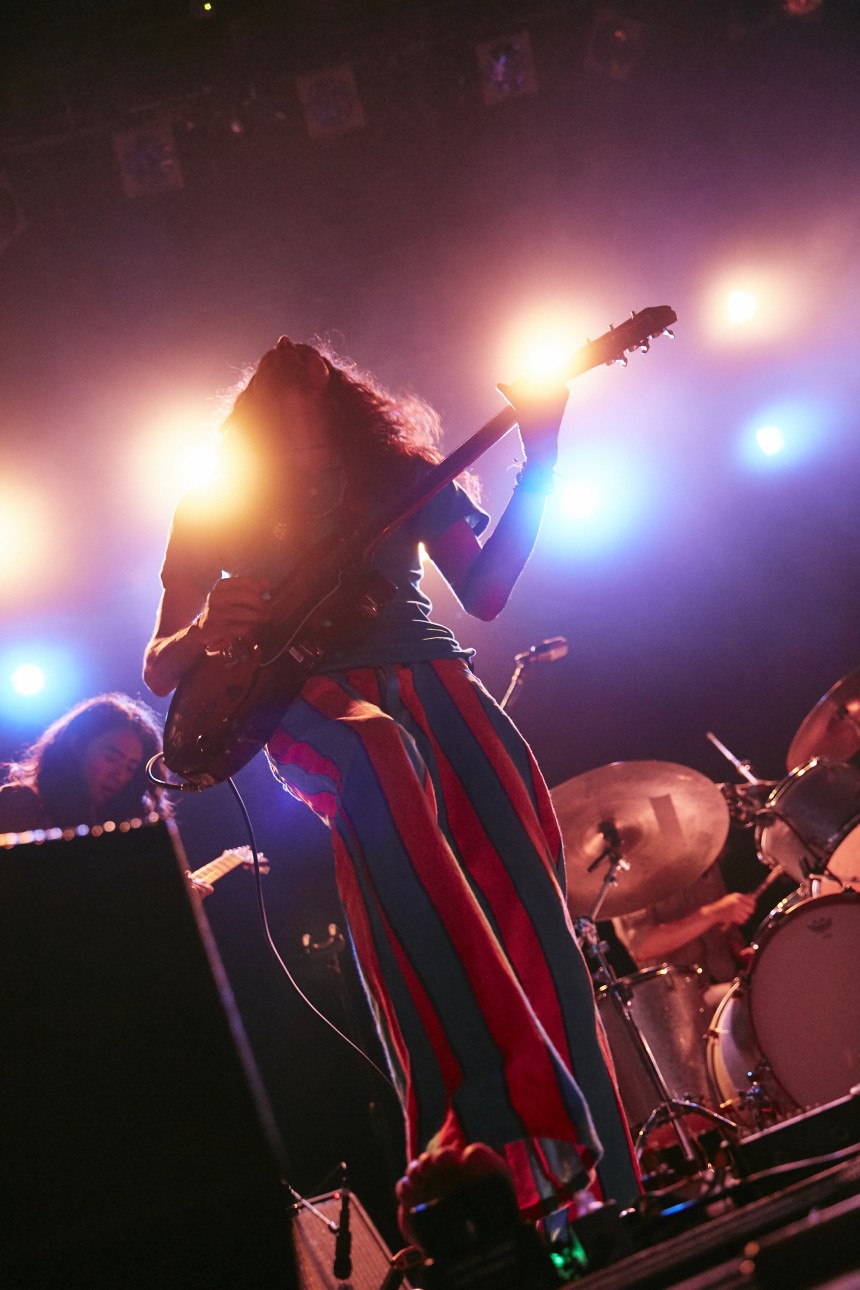 There was always going to be an encore. Failure to comply could have started a peacocking, emerald trousered, silver Beatle-booted riot that the narrow corridors of WWW X just don’t allow for, and anyway Kikagaku Moyo seem to be having as much fun as everyone else. Without leaving any room for doubt, they are back on stage, smiling and picking up their instruments for a relaxed and dreamy version of Masana Temples’ “Nazo Nazo,” a song that would sit comfortably on the Monkees’ Head soundtrack, soothing the collective nerves while making it clear that there must be more to come. They choose to finish with their much loved cover of Ananda Shankar’s 1975 oddity “Streets of Calcutta”, a galloping funky instrumental workout, that unsurprisingly features the sitar very heavily. As they make their way through intricate interwoven passages, and stop-start false endings that occasionally resemble Focus’s Yodel-prog classic “Hocus Pocus,” the band work themselves into something like a circular formation, an intense but serene light of inspiration bouncing from one contented face to the next.


The musical twists and turns that arrive unforeseen to the jubilant crowd, are the results of decisions made by the band and communicated telepathically mere seconds before: products of their ability to read the air, and the notes, and the subtlest changes in each other’s body language. Their almost elemental comfort in the music and in each other, make it clear that they are exactly where they belong, and that wherever they are in the world, night after night, Kikagaku Moyo are coming home.
FeaturedgigJapan TourJapanese bandsKikagaku MoyoliveMusicOgre You AssholePsychedelic RockWWWX
Leave a comment