Formed on the streets of Takadanobaba, Tokyo in the summer of 2012, Japanese psychedelic rock band Kikagaku Moyo have successfully morphed from a small, domestic outfit into a band very much at home playing on the global stage. The group (mainly based in Amsterdam) recently announced its homecoming tour and will play several gigs in Japan throughout October. Metropolis spoke to Go Kurosawa, the band’s drummer and the founder of their own label Guruguru Brain, about their latest tour in Europe, the band’s ambitions and October’s homecoming tour. 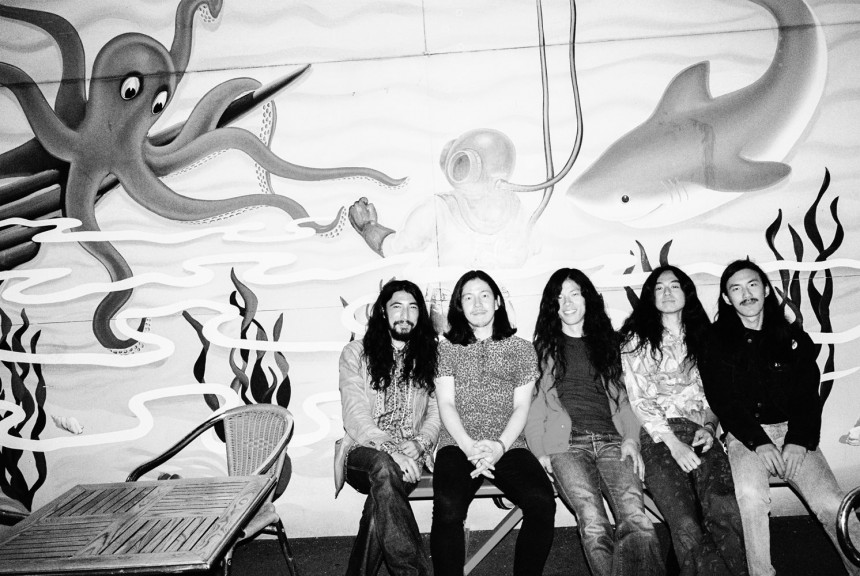 Metropolis: You’ve just finished your European tour. How was it?

Go Kurosawa: It was great. We visited some East European countries we’ve never been to  before, such as Poland, Ukraine and Russia too. These kind of countries had a different type of energy we have never seen or experienced, compared to Japan and other more developed countries.

M: Why did you decide to live in Amsterdam?

GK: It’s  good to have a hub in Europe for various reasons. We don’t have to deal with geographical difficulties such as jet lag caused by such long flights to the other side of the world. We chose Amsterdam because it is located at the center of Europe. For Japanese people, it is easy to get a visa for the Netherlands. Also, everyone speaks English so we don’t necessarily have to know the local language unlike in Germany or France.

M: You guys have been touring constantly for the past few years. Is it deliberate?

GK: We spent about half of the year touring for the past three years. When the band started in Japan, no one came to see our shows. I thought we would need to be big in the Japanese mainstream scene to make a living in Japan, which was not what we wanted to do. Then we started thinking about moving abroad where our music became more popular outside of Japan.

M: The band is coming back to Japan after two years. Do you feel that, when you play in Japan, it’s like playing at home?

GK: No, not really to be honest. Playing in America or Europe definitely feels like home more than Japan. Japanese fans are well behaved and mannered and come to see shows to listen to the music. That makes us feel nervous playing in front of them. Besides, there will be our families, friends and many other people we know who come to see our shows in Japan so I think it can be kind of awkward.

M: How do you feel about coming back to play in Japan — headlining bigger venues than before?

GK: It’s such an honor to come back to Japan after two years and the venues are bigger than the last time which is definitely a step up for us and I think that also means we will be more welcomed by Japanese fans than the last time.

M: Do you see Kikagaku Moyo as a Japanese band or foreign band?

GK: I’m not sure actually. Three of us are still living in Japan and the other two are based in Amsterdam now so I am not entirely sure if we are a Japanese band or not. I find it funny that our upcoming tour is titled as a Japan tour although we are technically a Japanese band. There is always a solid border between yougaku (Western music) and hogaku (domestic music) but I guess Kikagaku Moyo stands in between.

GK: I think what makes it different from the other kind of music is that it is ok to make mistakes. Tuning doesn’t necessarily need to be perfect all the time and we don’t need to be good singers. However, it feels like Japanese bands always want to be perfect in every single way. They always intend to improve their technique. There are  many expectations, pressures and rules among Japanese bands. I think we didn’t really like that and that’s part of the reason we moved abroad. We all like the freedom of psychedelic music.

M: Why did you start your own label GuruGuru Brain?

GK: Asian music is often released on vinyl but they are mainly reissues of 70s and 80s bands and are released outside of Asia. It seems like the Asian music scene hasn’t updated itself at all since then. Also, I think releasing songs through UK/New York labels used to be a status symbol but it’s already 2019 and we have ways to do everything by ourselves. It would make more sense to me to run our own label for our band and other Asian bands in this modern age. We would like to share our experiences touring the world, running a label or even  everything we learned with other Asian bands in order to expand Asian music.

M: What is the songwriting process like when the band’s members are away from each other? How do you overcome the distance?

GK: We always put our ideas on Dropbox and store them as demos. When we tour, we spend a week or so in a studio before tours start to play those demos together to shape up.

M: Where do you get inspiration from?

GK: Depends. But for the last album, we put what we experienced into sounds such as scenery, places we visited or the feeling of excitement when we meet interesting people. We also tried to create BGM for the cities/places/scenery we saw. Season also has much to do with songwriting, too. The song I wrote in Portugal would never sound the same as the one I wrote in Scotland.

M: How do you make a setlist?

GK: We decide the setlist right before hitting the stage — like five minutes before. It depends on the lineup, the venue or which day we are playing. If the band on before us are a loud band, our set will start with quiet songs. If the venue is seated, the set will be a bit more chilled. If it is on Friday or Saturday, the set will be quite party-style. Every setlist has jam parts but sometimes it is spontaneous. We don’t know how long the jam will be. The jam ends when it feels like it has ended. I always enjoy seeing how it goes and hope that our fans enjoy this too.

M: How would you categorize the Kikagaku Moyo sound? Is it psychedelic rock? Or do you have another genre that you closely relate to?

GK: I think it helps people understand what we are. Although psychedelic doesn’t have a clear definition like the other music, I like the ambiguity of psychedelic music. I think the general image of psychedelic culture is long hair, tie dye t-shirts and the 70s. But I think it’s about freeing our minds through creative forms. Sometimes people come to see our shows and close their eyes during the performance even though they are in the front row. I love seeing people receiving our music in their own way. I don’t mind being categorized as psychedelic rock because we like its cultural spirit.

M: Who are some of your musical inspirations from Japan?

GK: Melt-Banana, Boris, MONO and Acidmars. They showed us the possibilities of Japanese bands. Also I like old stuff such as Hadaka no Rallizes.

M: For this Japan tour, the band is going to play at the Zenkankakusai event (organized by Japanese punk band Gezan) in addition to your own tour. What are the things you are excited the most?

GK: We are very much looking forward to meeting Japanese bands as we barely know any. I was genuinely amazed by Gezan’s energy creating a free festival out of literary nothing. I had never heard of such a festival before. It’s such an honour to be a part of this amazing event.

M: What are the things you are most excited about when you play Japan in October?

GK: We will have one band playing with us (supporting) in each city. I am so excited about playing with them. Also, I am curious about what the audience reactions will be and have no idea if it is going to be Japanese or international crowds. I can’t wait to come back to Japan this October.