This writer first set foot in Koenji in the fall of 2012, during its eminent yearly shindig Koenji Fes, to write an article about the meeting between a Swedish underground cartoonist and the notable absurdist mangaka Hideyasu Moto, who then lived in the area. To walk around the streets of Koenji that weekend, seeing idiosyncratic street performers mash up jazz and punk by the train station, getting handed underground comic zines and flyers for electronic music events, and seeping in the exuberant atmosphere coming out from izakayas and live houses around Koshin- dori, was a revelation.

This, despite the fact that I had for years explored many other parts of Tokyo with similar qualities. There was something different about this particular artistic Tokyo town. Something more genuine and more carefree, it seemed. Something warmer and more inviting, certainly. And – imagine this; no Starbucks. Despite the many surface likenesses, I immediately felt, and understood, that Koenji was no Shimokitazawa.

By the time I had strolled around in this wondrous lull and ended up at what’s still my favorite Tokyo sento—gorgeous Kosugi-yu—the British writer and indie label owner Ian Martin had already been living in Koenji for a decade. Before moving here, he had a slightly similar revelation.

“I figured from its reputation that Shimokitazawa was the place for me, so I did actually look for an apartment there at one point. But all the estate agents just seemed to see a foreigner, sucked their teeth and said, Hmm… maybe difficult… By the time I was thinking more seriously about settling in a particular neighborhood, I’d realized Koenji was where I needed to be, mainly because of its music,” says Martin, who lives here with his wife. 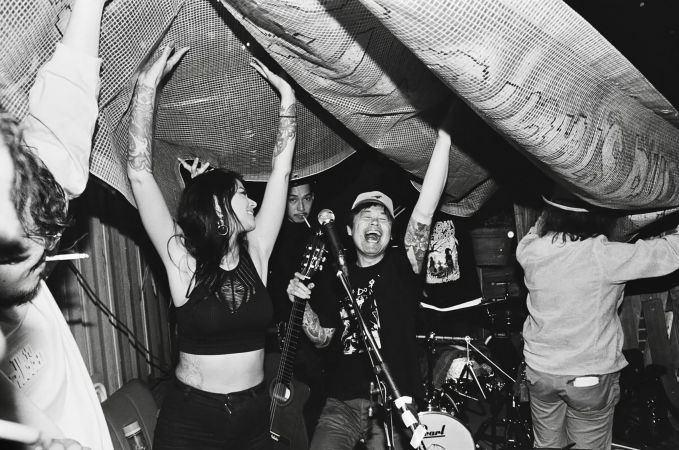 “Certainly, twenty years ago, it felt as if every station in Tokyo had its own distinctive music scene, and a lot of the liveliest spots were along the Chuo Line,” Martin continues. “So Koenji didn’t just give you its own music scene but also access, by one single train, to everything from Kichijoji through Shinjuku and all the way to Akihabara and Koiwa, in the east of the city. There was a sort of general Chuo Line music culture that linked all these local scenes with a similar alternative atmosphere, and Koenji was a crucial hub in all that.”

Amongst Tokyoites in alternative arts circles, it’s a known fact that Koenji has been an essential bastion in the music and art scenes of post-war Tokyo. It is also understood how hippie and punk culture traveled to Tokyo, and distinctively to Koenji, in the late 60s and 70s respectively, and how Koenji has continued to be a hub for alternative arts ever since.

Bassist Shingo Nakagawa has a long history in Tokyo’s indie music scene, being one of the members of the internationally- lauded indie act The Mornings in the 2010s. Currently, he plays with Koenji- based post-hardcore and indie rockers Tropical Death, who release their first full-length album Away Team this autumn on Martin’s Koenji-based label Call and Response. But the band, which consists of two American and two Japanese musicians, is indicative of Koenji’s spirit in more ways than just genres and labels.

Nakagawa views acceptance—whether it’s nationality, lifestyle or orientation—as a defining aspect of Koenji’s character. “Acceptance is embedded in Koenji’s DNA,” says Nakagawa. “People here are more used to diversity, and promote it more than many other artsy Tokyo areas. They’re vocal about it.” 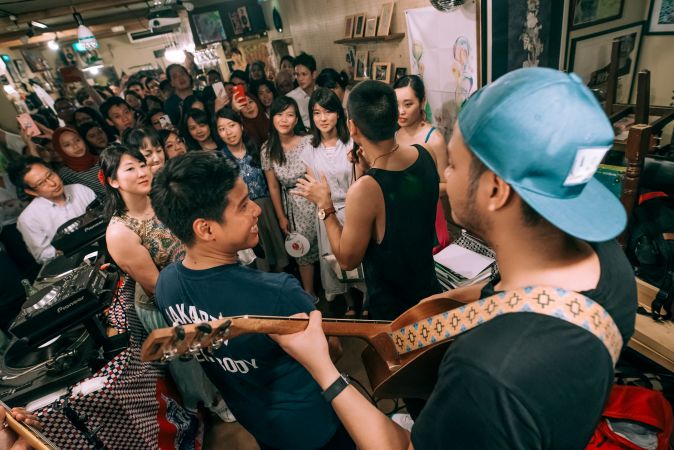 Koenji has indeed proven itself as one of the most international artistic towns in Tokyo, without a lot of the baggage that usually comes along with that. While not catering to foreigners in the overt way that a Tokyo town like Hiroo does, foreigners have still become part of the fabric of Koenji—not the least in its music and arts scene—albeit not in stereotypical ways.

Martin highlights another Koenji music space; the hybrid record shop, bar and event space SUBStore, which opened in 2016. “It’s significant that one of the most visible business owners in Koenji is Andhika Faisal from SUBstore, an Indonesian who has brought together culture from all around Asia in Koenji,” says Martin. “That adds a lot of vibrance to the neighborhood, but also creates a different atmosphere from a lot of the stereotypes of what a so-called hipster neighborhood is, and one not as obviously connected to the inflow of the trust fund capital that fuels gentrification.”

Andhika Faisal moved from Indonesia to Tokyo with his Japanese wife Kumi Takaba in 2009. After Faisal had worked as a designer at an apparel company for a few years, the couple decided to start their own multi-purpose space. Koenji seemed like just the right place.

Koenji is where old punk rockers go to die, so it was the right place for us.

“My first impression of Koenji in 2010, besides its famous music scene, was that the people here are warm, loose, and have a freedom in their soul. Koenji had also gained a reputation as a politically active area, with visible activism in daily life, which appealed to me. This mix of music scenes, different types of people, ideologies, activism and great bars made Koenji feel like a small village. One where many raise their voice against norms and the establishment.” 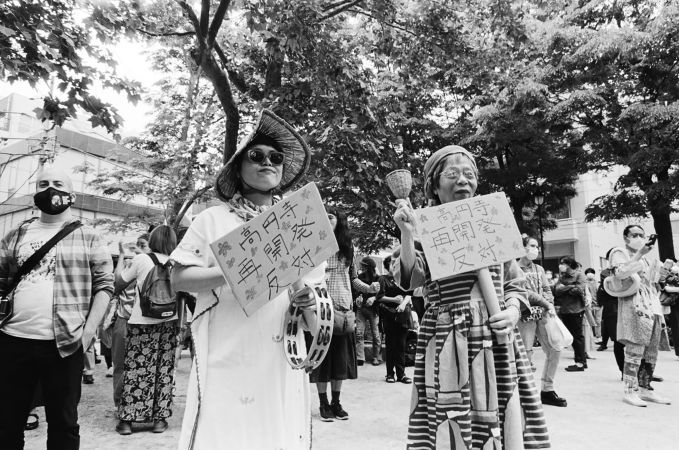 Needless to say, the pandemic put Tokyo’s arts and music community through the wringer – but Koenji has persevered. And in the midst of it all, a new major space emerged in Koenji that encapsulates the town’s spirit with more gravity than perhaps any other venue here: namely, Uptown Records on Koshin-dori, is run by Sacco Zimmerman from San Francisco and Sophia Wang from Shanghai.

They first opened Uptown Records Shanghai in 2011, which became one of the most important venues for underground music and culture in that city over the decade to come. With this came frequent scrutiny by the cultural police, which ultimately became such a hindrance that the couple decided to start a store outside China— not knowing that Covid was just around the corner.

“I came to Tokyo in February of 2020 to start the process of opening Uptown Records,” says Zimmerman. “Koenji is where old punk rockers go to die, so it was the right place for us.” 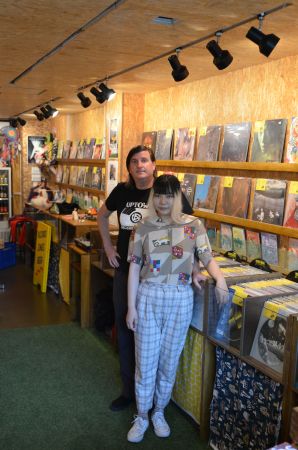 “But shortly after I arrived, the borders of both China and Japan closed. It wasn’t until after the Olympics of 2021 that Japan opened up visa applications to non- Japanese family members, and Sophia arrived in October of 2021. In 2015 Sophia spent a month in Shanghai jail for cultural crimes, which was the hardest month of my life. The one year and eight months we were forced to be apart was a similar feeling of helplessness. The uncertainty of that time put a strain on our relationship, because we had no idea when we could be reunited. I decided to put all my effort into the Koenji shop, and luckily did not give up. Now we run the shop together and our relationship is much stronger, having survived this experience.” 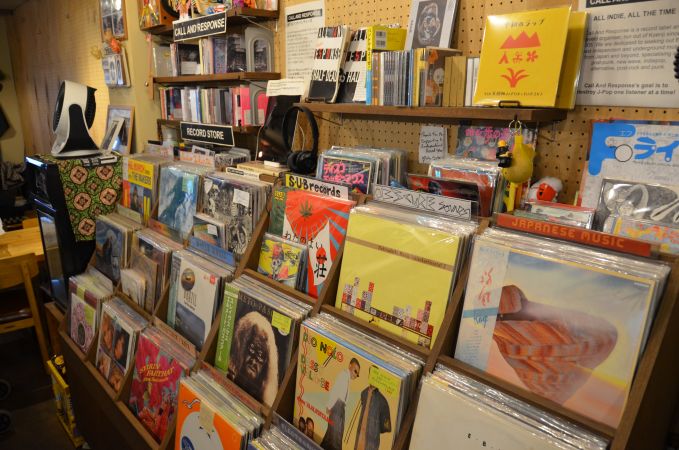 What’s also come out stronger is Koenji’s music scene, which has been reignited since Uptown Records’ arrival. Similar to SUBStore, Uptown diverts from the typical buzzed-about record store in Tokyo, by not being a mere proxy for record stores in New York or Berlin. Uptown Records is eclectic, but keeps a firm connection to Chinese underground music with frequent events—a rare phenomenon in Tokyo. Two years into running his store in Koenji, where the couple also live, Zimmerman’s love for the town has only grown stronger.

“One of the most endearing parts of Koenji is how older generations, in their 50s, 60s and 70s, keep on rocking by still going to shows and playing out live or DJing. Another unique aspect of Koenji is that there doesn’t seem to be much gatekeeping from established scene founders. Sophia and I were welcomed with open arms by the music and arts community, and I’m guessing it’s like that for most new arrivals here wanting to be active in the local scene.”

Zimmerman sees clear links between Koenji and the San Francisco underground scene. “I see many similarities to Koenji. Mostly because it’s like a bubble of creative and unique people who both like to donate their time to various causes, and have a good time while doing it.”

Another similarity is political activism. On May 15, hundreds of Koenji residents gathered for a protest against the proposed Auxiliary Road 227, hypothetically starting in 2025, which would run northward from Koenji Station through Nakano, destroying Koshin-dori where Uptown Records is located. The road would split Koenji in half, force many small and independent shops to close, and likely make room for unwelcomed commercialization.

Zimmerman held a speech right before the parade, where all other interviewees in this piece also partook in various ways. In the parade was also politician Satoko Kishimoto, who on June 19 won the mayoral election for Suginami Ward that Koenji belongs to. Kishimoto has been welcomed by many Koenji residents because of her demonstrated engagement with the community. She is also the first female mayor of Suginami, with a long international background—having lived in Belgium for 10 years, and with a history of environmental activism. With Kishimoto’s arrival, the future of Road 227 suddenly seems less definitive.

Koenji residents are willing to stand up to keep their neighborhood free and weird.

For Zimmerman, the parade was cathartic —and it summarized anew why all his roads led to Koenji. “I felt like I was back in San Francisco. Hundreds of people coming together and standing up against corporate greed is a magical thing to experience. Best of all, the protest came in the form of sharing music and art throughout the streets of Koenji. After living in China for over ten years, where you are not allowed to protest, it was a great feeling to be able to express ourselves socially and politically without fear of persecution. I’m not sure if the parade had any direct effect on development proposals, but it does send a message to the powers-that-be that Koenji residents are willing to stand up to keep their neighborhood free and weird.”

Erik Augustin Palm is a Swedish culture journalist and TV-producer based in Tokyo. In his spare time, he strums his acoustic guitar at some small live house.