Living It Up In Otsuka

It’s easy to get stuck in your bubble living in Tokyo. After a while, heading out to other parts of the city can seem tiresome or too far away. Well, next time you decide to try somewhere new for lunch or dinner, head one stop past Ikebukuro Station on the JR Yamanote Line to Otsuka. This area has seen some pretty big changes, particularly in the last five years, with some welcome new establishments opening up.

Otsuka is lively, charming, local, old and new all rolled into one. Bright retro signage is dotted around and sits comfortably alongside muted modern interiors. The Sun Mall shotengai (traditional Japanese shopping street) is full of daily hustle and bustle, salarymen and women out on their lunch break, old folks out for a coffee and the occasional community event at the newly built plaza outside the station. A strong sense of community really binds this place together. 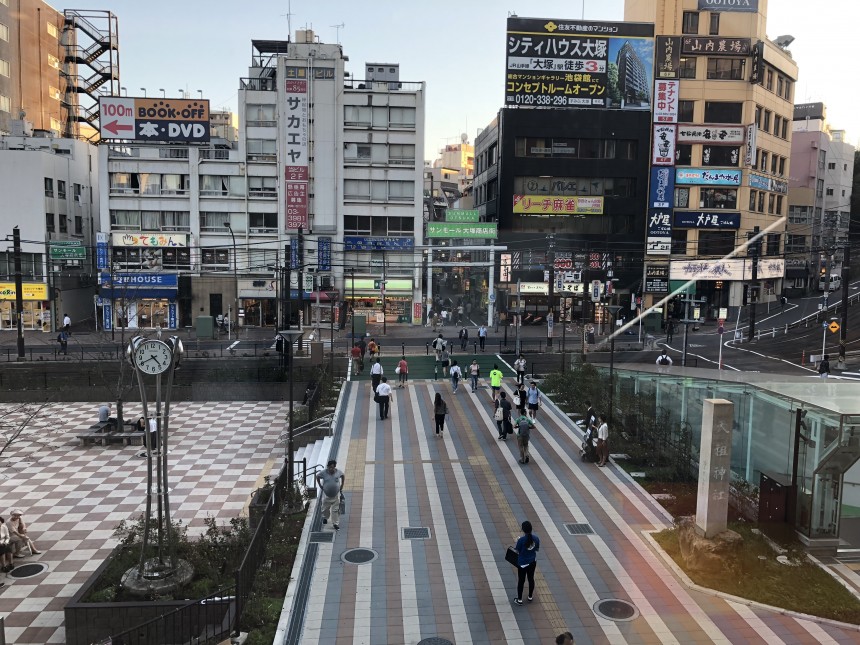 View from Otsuka station looking out towards the shotengai

Helping to foster that sense of community since 2012 is Ryozan Park, a share-office and co-working space that runs alongside the tram line about three-minutes from the station. The owners, Noritaka Takezawa and Rachel Ferguson, have created a diverse community, built strong relationships with entrepreneurs and opened up an English preschool — all in the same building. They also host regular events, and when the weather allows it, there are some pretty amazing barbecues on the decked-out rooftop with views of Tokyo Skytree in the distance and the tram line below.

The Toden Arakawa Line is one of Tokyo’s last running tram lines. During the spring you’ll find the area around the station and all the way along the tracks lined with beautiful, colorful roses. The seeds are bought by local businesses and then planted and looked after by a group of local volunteers. It certainly cheers you up when you’re walking around the area. 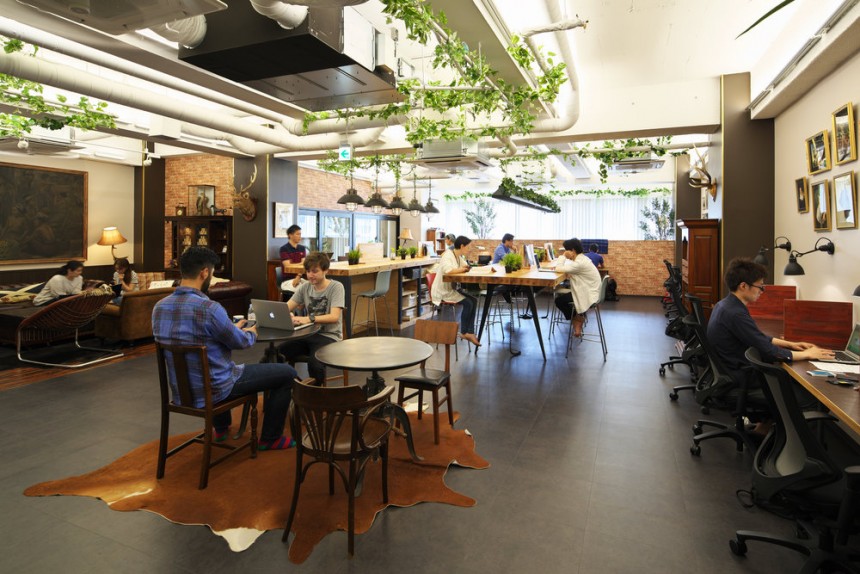 Downstairs, just round the corner from Ryozan Park you’ll find Pub Republic, run by Mogi since September 2015. Mogi lived in Ireland for 10 years, returning to Japan in 2004 aged 20. He’s been working in pubs for nearly 14 years and has a loyal customer base that have followed him from his last pub in Ikebukuro to his current one here. As well as a wide selection of drinks, there’s also a range of light bites and snacks with the occasional special on offer. Mogi says of the Otsuka community:

“It is a very small community and all the neighboring shops and bars know each other, and there’s always gossip! Sometimes we are rivals but sometimes we are friends, and I kind of like that now since I’ve got used to it. I like how Otsuka has the least chain izakayas and shops out of all the stations on the Yamanote Line. Therefore, a lot of places are individually owned and there are so many small places that provide counter seats to welcome individual customers. Also recently, Otsuka itself has been redeveloped with a lot of new shops and bars opening under the management of a younger generation. It’s making younger people visit Otsuka more which provides a great mix between the old and the young generation.” 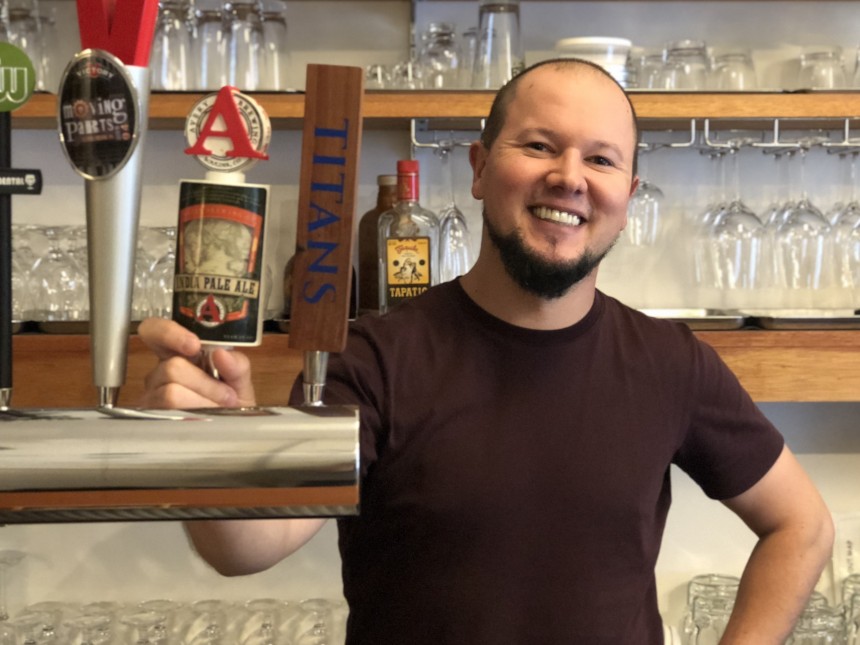 All the beers with Todd from Titans

New bars include Titans Craft Beer Taproom & Bottle Shop which is located just at the entrance to the shotengai. There’s no compromise on the quality of the beers in this casual, welcoming space, says co-owner Todd Stevens. Every beer has been carefully selected for the simple reason that it’s good. Titans recently celebrated its two-year anniversary and has grown to become the destination spot for events such as the Open Mic Night comedy show run by Stand-Up Tokyo every Monday (free entry and limited ¥500 beers!).

A little further up, and bit fancier is Tamaya, a wine bar and restaurant that has an outstanding selection of wines, delicious bistro-style food, and a variety of meats, cheese and desserts, all reasonably priced. I have eaten here a lot over the last four years, sampled many a glass of wine, and on an average night out between four of us, our total bill has always been around the ¥10,000-¥12,000 mark. For this kind of quality and range, it is an absolute bargain.

Staying within the shotengai area is Holy Head, a casual pub perfect for small groups (two-four people). Feast on delicious steak, fries with curry beans, a huge caesar salad, juicy schnitzel with a tangy marinara sauce and garlic shrimp to name just a few of my favorites. It usually has about four craft beers on tap and on rotation. The atmosphere is a mixed bag of old rugby games on the telly, bagpipes playing faintly over the speakers, album covers and other Irish and Scottish memorabilia on the walls. During the day you must visit the local fishmonger a couple of doors down, they sell some of the freshest fish from Tsukiji market at fantastic prices. The shio saba (salted mackerel) being a firm favorite (and often selling out!). 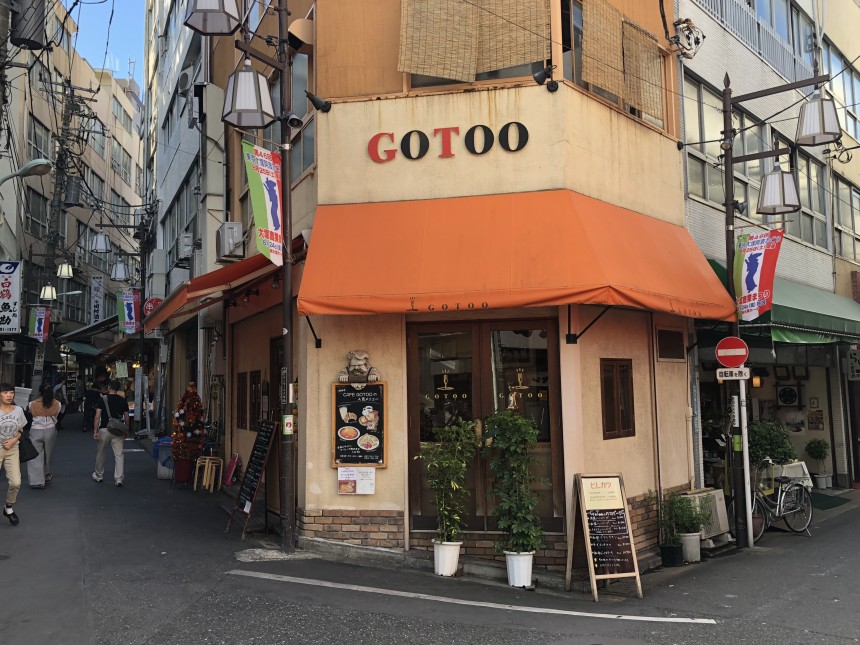 Homemade and hearty lunches at Go Too. Get there early to avoid the queues.

On the same little side street as Holy Head and the fishmonger is one of my favorite lunch spots, particularly when I’m in the mood for some hearty Japanese food. GoToo does some of the best homemade lunches, from tonkatsu (fried pork cutlets) to delicious meat and veg plates.

Time for a coffee break? Forget Starbucks at the station, instead head to riddle Coffee & Bar for your caffeinated treat. It has a selection of house blend and single origin beans that change daily. It also does a mean chicken fajita wrap, and great value lunch sets with coffee for ¥1,000. A small touch that I love about this place is the huge glasses of water you get with your coffee, no tiny glasses that are so typical of  establishments here. It also has a great selection of craft beers on tap and in bottles for you to enjoy right through to midnight when it closes.

All the places mentioned here can be found from the south exit of Otsuka Station, but head out the north exit and you’ll find OMO5 by Hoshino Resorts. A hotel that is host to Eight Days Cafe, a bright and warm space with floor to ceiling windows wrapped around the corner of the building. A good spot for lunch, coffee, reading during the day and free WiFi. There’s also a well stocked bar for afterwards.

You’re spoiled for choice when it comes to food and drink in Otsuka. Many of the restaurants here are worthy of the ‘hidden gem’ title. I haven’t even talked about the shrines, the batting center, the famous sake spots and the world’s second Michelin star ramen restaurant, Nakiryu. Go for a wander, get lost and stop by any of these places for a warm welcome to the area.