Art is something that shouldn’t be judged too logically or strictly. This is especially true in the case of the paintings of Belgian Surrealist artist René Magritte (1898-1967), the subject of a major retrospective at the National Art Center, Tokyo. The show brings together 130 works from art museums and private collections in an attempt to celebrate and reappraise Magritte’s contribution to 20th-century art. With his repetition of motifs, aura of mystery, and sheer humor, he is one of the most distinctive painters of that century. 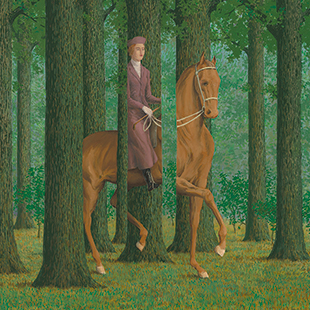 Magritte was a “fellow traveler” of the Paris-based Surrealist movement, which, centering around the French poet André Breton, channeled currents of absurdity, Freudian subconsciousness, and the “sexpol” theories of the Austrian communist Wilhelm Reich. But while the Surrealists swung increasingly towards communism, Magritte’s early artistic roots lay with the Italian Futurists, a group normally associated with the Italian fascist movement.

This is made clear in the “Early Explorations” section of the exhibition, which shows the art Magritte created before he found his trademark style. But even here, Magritte’s perennial interest in sexuality is evident in the prominent pudenda of the female figures in “Women” (1922).

Another interesting influence highlighted by these early works is “Purism,” a little-known artistic movement towards geometrical simplicity that influenced the likes of Joan Miró, among others, but was later lost in Art Deco. The Bather (1925) is an excellent example of this aesthetic. Magritte’s early affinity with this movement perhaps explains the stylish simplicity and smooth surfaces that became characteristics of his later paintings.

Magritte’s humor is subtle and very European, and often the paintings are simply baffling until you read the title of the work—which then provides a key to the “joke.” A good example is a work from 1936 showing an artist painting a picture of a bird on a canvas while studying an egg. If we haven’t already made the connection, the title “Clairvoyance” gives us that extra little nudge: Yes, the painter is looking at the egg and seeing into the future by painting the bird it will become.

This work is also an example of another characteristic of Magritte’s work, the repetition of motif. Both the egg and the bird with its outstretched wings appear in several other works. Other recurring motifs are bells, bowler hats, and banisters. He also has an affinity for large chunks of rock.

The repetition charges these motifs with a symbolic energy that sets up interesting psychic currents pulsing through his oeuvre, something that can best be enjoyed at an exhibition like this.

The bowler-hatted man is usually interpreted as a symbol of the bourgeoisie and seen as an avatar for Magritte himself. This motif enjoys its apotheosis in “Golconda” (1953), a large canvas in which scores of bowler-hatted men rain down from the heavens. The title serves as a heavily sardonic comment: Golconda was an ancient Indian kingdom and city, proverbial for its great wealth. The title therefore implies that these boring individuals—who, of course, lack individuality—are a source of great wealth. One wonders what Magritte would’ve made of Japan’s salarymen.

Less is more with Tadao Ando’s current retrospective at NACT

Surrealism in a surreal city