Stepping into another’s shoes for a day

Before I set foot in Japan for the first time in 2004, I was fascinated with the geisha and maiko (apprentice geisha) culture. It was a cliché female obsession. The geisha were presented to me as mysterious, alluring, and the epitome of Japan’s rich cultural history. Fueled by Arthur Goldman’s novel Memoirs of a Geisha, I admired them from afar. When I at long last visited Kyoto, I realized that seeing a real maiko was like seeing a unicorn—a unicorn hurrying to some evening engagement, avoiding photographs like the plague. Luckily, I later had the privilege of meeting a maiko in person, thanks to a Japanese community event.

Yet walking around the Gion area of Kyoto where maiko and geisha work, a layman would believe that they were actually as prolific as salarymen. That’s because the majority of the geisha strutting around are not so—they are imposters dressed up, thanks to the many “experience” companies that offer visitors the chance to play pretend. With a little money and several hours of transformative beauty, the result is dazzling. Only the wigs with their abrupt hairlines give it away—or the fact that they are taking selfies. 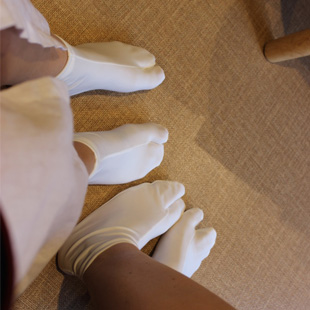 When I first lived in Japan, I had the intentions of playing dress-up too. But it never happened. So when an American friend recently suggested we do so, I hesitantly said yes. Was this cultural appropriation? Can you actually appropriate an aristocratic culture? My Japanese friends reassured me that Japanese people could care less if we imitated their culture in costume. Plus, apparently most maiko experience participants are Japanese themselves. Turns out, everyone wants to make believe.

Picking a company from the seemingly hundreds in Kyoto was daunting, but we eventually settled on Maiko-henshin Studio Shinki. It was English-friendly, inexpensive (¥8,900), and located in the heart of Gion. On a beautiful Sunday, we checked in at the lobby with what seemed like every other person in Kyoto, 99 percent of them being Japanese. We were then led to the changing room, where we swapped clothing for a thin, white robe and tabi (two-toed socks) that we purchased (¥390). Makeup was washed off and cameras put away—not allowed during transformation—before the fun began. Hours and hours of rather excruciating “fun.” Who knew that becoming a maiko was so damn labor intensive?

It started with about a kilogram of makeup. The perfectionist artists dye you white and turn your face into a beautiful work of art. Just don’t touch it, or risk deportation. I sat next to a young girl, barely three-years-old, who stoically took the cruel and unusual punishment like a champ. Next came the wig. For an extra charge (¥2,100), they can use your real hair to disguise the wig lines. We opted for this, so my bit of hair was sprayed black to match the obnoxiously heavy wig. I grew to hate that wig. But I sure looked like a maiko.

Finally, we were dressed in the kimono and accessories we had picked out beforehand. We both chose green and stood helplessly as women flurried around us, making knots and choking off any air supply. We looked stunning. As part of the package, we had our photos taken in their professional studio, posing with umbrellas, fans, and traditional toys. I remained true to maiko form: not smiling, but trying to hint at one from the corners of my mouth. The six photos were printed out later and looked hideous; I looked annoyed as all hell. Thank goodness we had decided on the “strolling” plan. 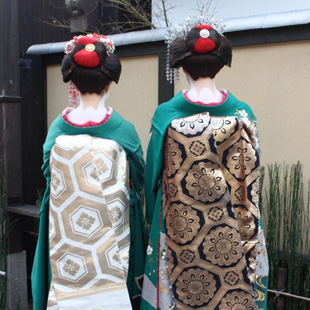 We strapped on geta (wooden shoes) and went out on our own for an hour, no supervision necessary. For us, this was what we anticipated, and it was everything I imagined it to be: people stopped dead in their tracks, many requesting photos. Even though we were obviously foreigners, I still think we fooled a few people. When we weren’t dealing with the paparazzi, it was fun to find flowers, hidden alleys, and archways to pose under.

We eventually returned, me complaining of a headache from the wig. It took another hour to “de-maiko,” but every step felt like freedom. I gained a newfound respect for the legit maiko and geisha. You sweat, you dodge, you cannot scratch, and you cart around what feels like the entire contents of your bathroom and wardrobe. Just … nope.

But looking back, I definitely think it’s important to step into another’s shoes for a day. Even if they are super clunky and uncomfortable.