Four female swimmers on their love of the sport

As the heat of summer presses down, swimming takes on great appeal as a fitness option. Easy on the joints, swimming also happens to work every muscle in the body while keeping cool. Metropolis talked to four female swimmers on what they love about the sport and why you should take the plunge, too! 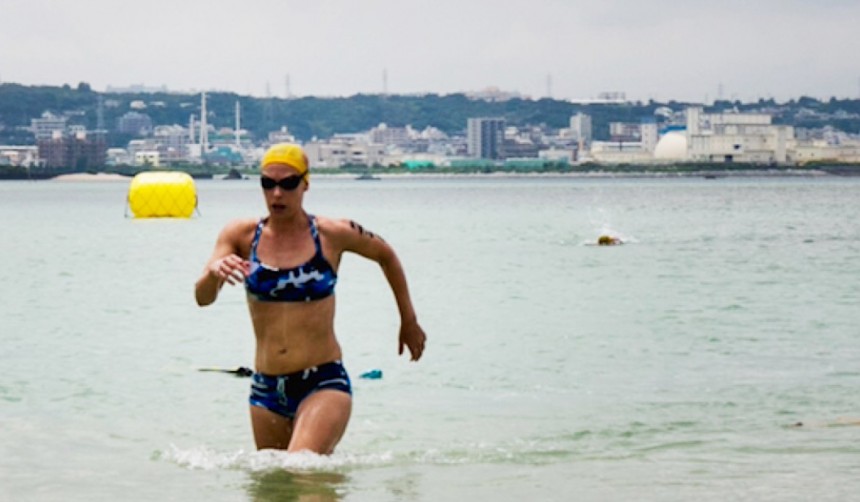 Originally from the United States, Lisa Batey discovered swimming at an early age. Swimming competitively since she was eight, Batey says the sport satisfies her competitive urges but also gratifies her in a way that other forms of exercise do not. However, it was outdoor swimming in Idaho while home caring for an ailing parent that showed her a whole new world in a sport she adored.

“Up until 2012, I was completely a pool swimmer,” Batey says. “Open water was of no interest, besides the occasional vacation splash. Somehow, in that lake in Idaho, my brain switched, and if I can avoid indoor pools, I will!  Even swimming in outdoor pools is fabulous – the waves, light patterns on the bottom and fresh air!”

As a massage therapist at a Tokyo gym, Batey literally relies on her body for her work. Staying healthy and strong, then, is particularly relevant, but past shoulder injuries mean she has to be careful, too. Cycling and running are great, she says, but she worries about falling or running into pedestrians. “I’m much better in the water!” she says.

While Batey takes part in the occasional competitive swim, the sport has a deeper relevance for her that goes beyond podiums and awards.

“When I’m running, my mind wanders.  I think about dinner, my client schedule, life… When I’m swimming, all I can think about is technique, stroke count, rotation, time, streamline.  I listen to my hands enter the water, the muted underwater moving silence.  In the ocean, I find my point and go there. I feel the water toss me around like just another fishing buoy, the great vastness of power all around me.  I think somehow it gives me a place in the universe: a very small, changing, dangerous place where I have no control.  But isn’t that true every time we step out the door? I just choose to acknowledge it and wrap myself in it.”

As an international trade specialist, Alisa DiCaprio travels the world for her work. While most people would find that exciting enough, DiCaprio throws in something a little extra: triathlons. While living in Finland in 2010, she decided to take up the sport as a way to spend time with her U.S.-based brothers. A competitive swimmer since age six, she also loved cycling. “I thought, how bad could the running part possibly be?” says DiCaprio.

“Doing long-course triathlon means I get to see some of the most beautiful hidden parts of the countries I race in that many people never see – well, at least, not in one day,” she adds. “During one race, I saw the most magical forest. I’ll never see that again, and there are no photos, of course.”

Like Batey, DiCaprio prefers open water but she also loves the solo factor of the sport. “Swimming is all you,” she says. “Either you mess up or you win. It’s no one else’s fault.”

DiCaprio also finds a welcoming community of like-minded people in the water and on the course everywhere she goes. “No matter where you are, triathletes are all the same – kind of Type A, really competitive, and all they want to do is train. It’s an easy way to integrate quickly and completely into a country. I really appreciate that.” 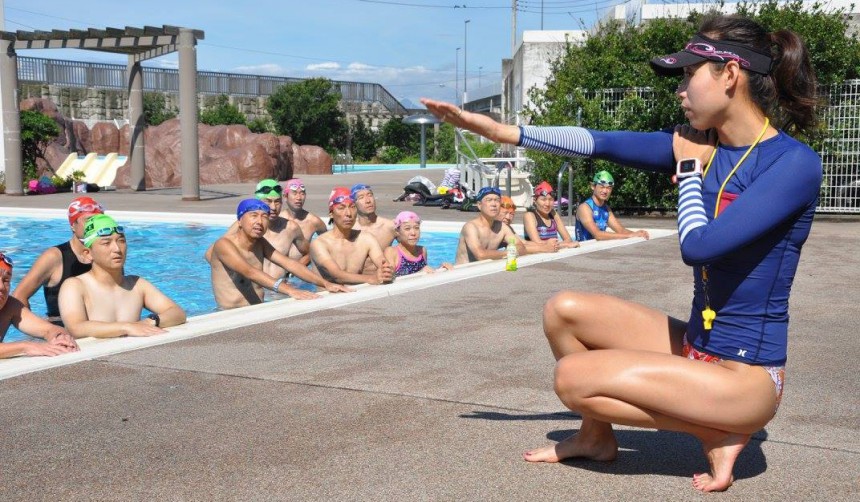 It’s no wonder that former Japan National Open Water Swimming Champion and Olympic swimmer, Lisa Miyasugi feels most at home in the water. A brief stint working for a travel agency found her yearning to get involved in the sport in some way. She began experimenting with coaching six years ago, and three years ago took the plunge to become a professional coach.

“I enjoy teaching and training people of many backgrounds and abilities,” says Miyasugi. “It’s very satisfying to see a student develop into a good swimmer.”

Swimming, she says, is a natural sport for people to want to do. “By nature, human beings are connected to water. It is a basic human instinct. Newborn babies know how to swim. Everyone can swim if he or she does not fight nature.”

Miyasugi also believes swimming is one of the best forms of exercise. Water pressure massages the body, the current stimulates blood circulation, and buoyancy takes the pressure off joints that can often become painful in weight-bearing exercises. A study commissioned by Swim England, the national governing body of the sport in England, backs her up. The study found that swimming posed all of these benefits, and also helped those suffering mental and emotional challenges, as well as cognitive difficulties.

While many of her students seek her out to improve race times, Miyasugi thinks about the sport more deeply. “I am totally dedicated to my students,” she says. “Everyone is different and has his or her own unique and particular goals. I believe hard training is good, but effective, easy and efficient training is better. In my classes, students share mutual respect and have fun in the workouts.” 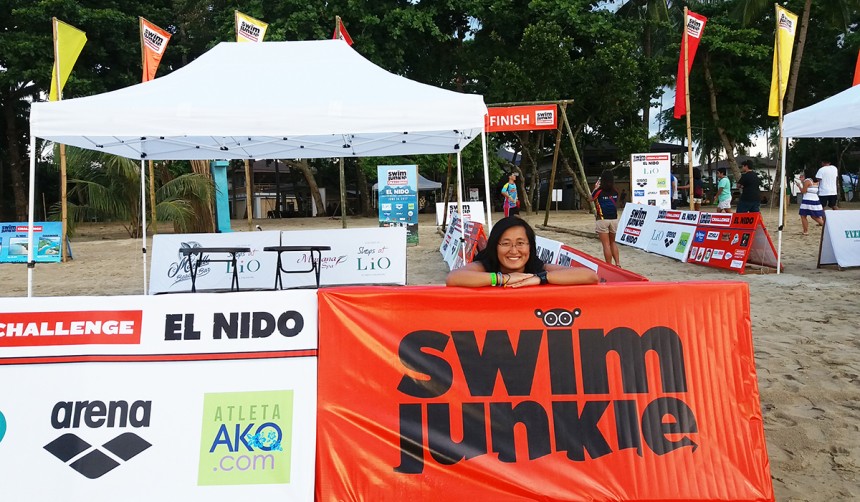 “Being an Aussie, we practically grow up in the water,” says Aleisha Riboldi, a dedicated open water swimmer from Sydney. Yet, it wasn’t until her early twenties that she moved her swimming routine from the pool to the ocean. A friend mentioned they were doing an open water swim at Bondi Beach, and she decided to give it a try.

“I decided to enter on a whim. My first race was only 2km, but it was so much fun,” says Riboldi. “It was satisfying and such a great accomplishment that I gradually did a couple more.”

Riboldi kept swimming when she came to Japan, but open water swimming opportunities were scarce in Hokkaido and Fukushima, the two prefectures where she lived before moving to Tokyo. Like DiCaprio, Riboldi discovered a welcoming community of swimmers.

“I was amazed to discover that they had an open water swim association and various races. I loved that swimming was a challenge, was good for meeting new people, exploring Japan, and gave me motivation to study Japanese.”

She loves races and marathon swims (10km), but Riboldi, like the other swimmers here, finds a pleasure that goes beyond competition. “Open water swimming has taught me a lot about learning to get uncomfortable as well as endurance and perseverance, which are things that can help you throughout life. Out in the ocean you face a lot of unknowns – marine life such as sea lice and jellyfish, currents and tides, as well as other swimmers. Open water swimming makes you a stronger, more confident person. Knowing that you can get through and survive an open water swim race makes you more adaptable to the challenges in life.”