“Teaching English’s an easy gig, but sometimes I feel like I ain’t teaching shit,” raps Rhyming Gaijin on “Endless Possibilities,” a track from his 2010 album, The Soundtrack of My Life. “They’ll probably learn from me if they study my rap.” 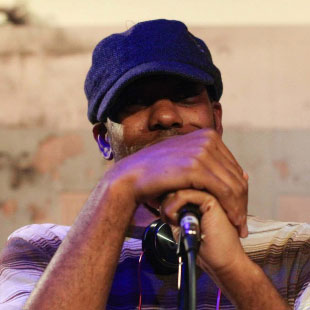 With autobiographical lyrics and self-produced beats often incorporating quirky samples, Rhyming Gaijin has made a name for himself in the Tokyo underground hip-hop scene.

What makes Rhyming’s music resonate with his audience, however, is his narrative. He documents his experiences living and working in Tokyo, where he teaches English by day. He believes this to be an element that makes his music more relatable and inspiring.

“I talk about my life and try to make it understandable to a broad audience,” the 32-year-old Pennsylvania native explains to Metropolis.

A defining moment in Rhyming’s life came after graduating from Philadelphia’s Temple University in 2005, when he decided to move to Tokyo in pursuit of his musical and educational goals.

Upon moving to Japan, Rhyming started two YouTube channels—“rhyminggaijin” and “messypro1”—to vlog about life in a new country and his musical career, respectively. His videos discussed culture clashes and provided insight into life in Japan, which garnered the musician an international following. To date, “rhyminggaijin” has over 900,000 subscribers while “messypro1” boasts over one million.

“The reason I make YouTube videos is to inspire people around the world, showing them that they can do anything,” states the internet star. “I answer questions when I can and give them the most help I can. My philosophy is simple. I want to do three things: Inspire, entertain and educate. I believe the reason why viewers are intrigued is because I have stuck to these ideas.”

Rhyming also applies his doctrine to his performances, which he keeps fresh through freestyling. “It keeps the shows exciting,” he says, explaining that it also helps him connect with his audience and test new material and styles.

When asked if his teaching ever collides with his music, Rhyming confirms there’s definitely an overlap.

“Often, one influences the other. In my music, you can hear about my life as a teacher,” referring to a line in “Endless Possibilities,” wherein he raps, “My student looked up and said, ‘Hey, you’re black!’”

For the past two years, Rhyming Gaijin has been focusing primarily on his education, studying business at Globis University. Now having gotten his MBA, the wordsmith is excited to continue producing and performing, and to apply the new knowledge to fortify his music.

“It is my goal to create new paths for musicians to make music,” he says. “I want to be the bridge between musicians and businesses.”

Having come very far from his YouTube days, Rhyming states the most important thing he’s learned thus far is the value of balance.

“It’s so easy to do one thing 120 percent and neglect other things. You can see this when family-run businesses become 120 percent
business and forget about the family.

“I believe we must find the balance in everything we do.”

Find Rhyming Gaijin’s albums SMF, Welcome to J-Land and The Soundtrack of My Life on iTunes or http://rhymingg.bandcamp.com.