Manga and music collide with Metempsychosis

Think of Japanese music beyond the media of music itself and you’re naturally drawn to classic anime and film soundtracks by the likes of Joe Hisaishi, or game scores like the Final Fantasy suites, or even the chiptune fun of Nintendo classics like Super Mario.

What isn’t so usually aligned with the Japanese music scene is the world of manga, but Los Angeles-based record label Zoom Lens is here to change all that with its latest release: Metempsychosis, an intriguing mashup of music and art.

A collaboration with independent manga house Fakku, Metempsychosis is a compilation album accompanied by an art book of original pieces by Japanese and international artists inspired by the manga tradition. Each song has a counterpart illustration in the book, with Japanese art represented by such artists as 3D visualist Onoda Takuma and acclaimed horror mangaka Shintaro Kago.

Speaking to Metropolis, Gary Y., the founder of Zoom Lens, details how the project developed from an anime dance party hosted by Fakku that featured acts from the label.

“We immediately began to speak of how Fakku and Zoom Lens artists could further work together under the pretence of a visual and auditory collaboration. We settled on the idea of ‘metempsychosis,’ a process in which the soul seeks to gain new experiences.

“When artists of a different medium come to work together, they are gaining different insights, and introducing each other to a new world. We wanted to create an experience where musician and illustrator were placed on an equal calibre.”

One of the acts on the compilation, Moon Mask, explains how he went about creating this dialogue between musician and artist, working with the wild visuals and colors of Yuta Sakakibara.

“Working with Yuta was a little bit different than how my album covers were made,” he explains. “In this case, I saw their work first and tried to follow the sounds I heard when I saw the colors and the visuals.” 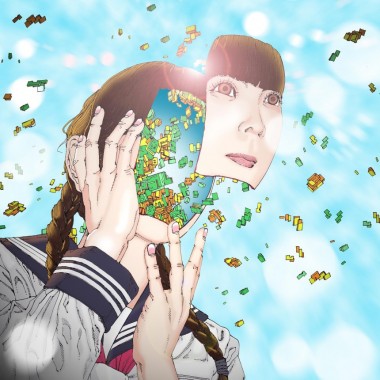 “I have some of Kago’s work in ink on my skin,” she says. “His work is really so beautiful and I have been an admirer for a long time. To see another artist’s representation of my work creates an alternate bridge to the world I’ve created, and in turn I get to see Kago’s world and his dreamscape.”

The crucial point of the spiritual journey represented by Metempsychosis is a search for new experiences without judgement. In Gary Y.’s view, this idea led to a natural partnership with the world of Fakku.

“I was inspired to work with Fakku because they give exposure to many Japanese artists whose works are often not legally distributed abroad, and whose works are often censored in their home state,” he explains. “I believe these artists deserve to have freedom. There are sometimes transgressive themes present, but I believe in the freedom of expression, and not necessarily action.”

“Our work originates from a rebellious centre,” says Fangrrlz. “For ‘Angel’s Egg,’ we drew on magic girl references, for example, how Sailor Moon applies themes of a soul’s rebirth and expresses that visually.”

Yeule’s contribution to Metempsychosis speaks to these same spiritual themes. “The song Death of an AI is about the self-realisation of an artificial intelligence, in which her death of being a mere electronic pulse completes her and she becomes oblivion and scattered once more within the digital scape.” 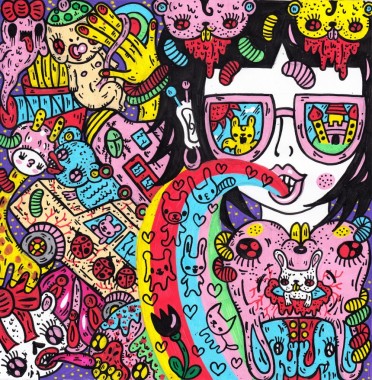 She elaborates on what the song means to her on a more personal level. “Humans and AIs come from different mediums but the same energy source, which is the universe. I feel like I’m part of a huge system that is just playing tricks on me and observing my life. I don’t feel free but I can try to pretend I am while I continue to live and breathe in this life. I’ve lost people close to me and seen Death so close that I could’ve touched Him.” She ends on an equally powerful note: “I live in a perfect world in my head and let the outside perception of myself die a peaceful death.”

A high-concept song like this suits the high-minded nature of the album, and the nature of Zoom Lens in general. Speaking of his vision for the label, Gary Y. says, “I’d like us to produce anything that can convey a message to display our work as a place of empowerment to its individual creators. I want Zoom Lens to be the platform for those voices.”

This ties in with how Moon Mask sees the label. “I feel the spirit of the ZL family comes in how the majority if not all of the artists are outcasts in their respective scenes because of their mindsets and views in art and music. It’s become the rallying point of our members to come together as a family and it really drives us to create more music together.”

His label-mate Meishi Smile has a more lackadaisical view on the matter. “We’re all just really sentimental and depressed. In Japan, we’re apparently known as that net label full of angry and mentally unstable artists.”

I’ll leave it to Yeule for the final word. “Zoom Lens is a group of cult leaders who disguise themselves as musicians and all of us get together once every 500 years because of the way the stars align in Cygnus and the Ursa Major,” she reveals. “We love each other and the universe believes it is too intense for all of us to be within the same vicinity at one go, so we’re all scattered around the world. During the Metempsychosis release party in LA, the moon was in Waxing Gibbous so it was more than 50% illuminated to allow most of ZL to be concentrated in one area without opening the gates of hell. That’s all I can share for now!”

The Metempsychosis album and artbook is out now on CD, vinyl and in digital form at http://zoom-lens.org/

London's Giacomo Lee is the author of FUNEREAL, a unique Korea-based novel that's Black Swan meets Black Mirror in the big city of Seoul. Follow @elegiacomo for more of his music writing and mixes.

A tabi-clad step into the world of the ‘Hokage’