Reconnect with nature through ikebana

The art of ikebana is one that’s quintessentially Japanese. Its name combines the words “ikeru”, which means “living”, and “hana” or “flower”; “ikiru” can also mean “arranging flowers”. It can be a deceptive art: at first glance, the work may appear to simply be floral arrangement. But it is in fact a spiritual practice—a meditative escape from the chaotic world in which we live.

While the art’s exact origin is unknown, ikebana has been practiced for at least six centuries. It began as part of Buddhist customs, evolving over time into different styles and approaches. Today, there are more than 3,000 ikebana schools, with three of the biggest being Ohara, Ikenobō, and Sogetsu. 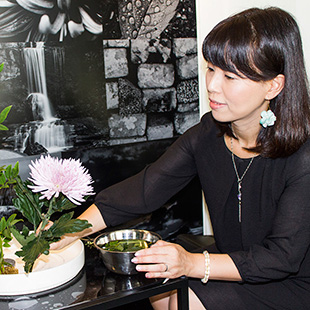 Sogetsu is a versatile school that focuses on the art as a form of self-expression, suitable for those looking to explore ikebana for the first time.

“Sogetsu school is really free … they have the free mind; we can create anything we want. It’s called the Picasso of Flowers  with its radical conception,” explains Mika Otani, owner of Atelier Soka, which provides Sogetsu ikebana classes in Tokyo. “I can put my emotions and my ideas—and sometimes criticize society—into ikebana. We can express something through flower materials. It’s art.”

Otani has been practicing ikebana for 27 years and is a master of the art. She not only teaches Sogetsu ikebana at her three locations in Tokyo, but also conducts seminars and demonstrations in India and Australia.

While ikebana has been a part of her life for nearly three decades, it wasn’t always her day job. For many years, she worked as an editor for Japanese publications, later transitioning to a career as a web publisher. But following the Great East Japan Earthquake of March 2011, her view of the fragility of life changed, as it did for so many, and she decided that she would spend her time creating the art she loved and teaching it to others. That’s when Atelier Soka was born. 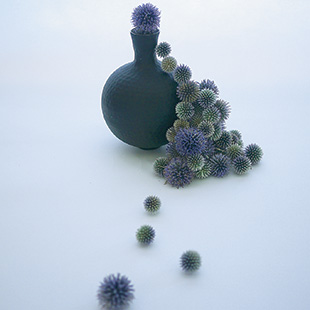 When asked how ikebana has changed her over the course of her life, Otani says, “It’s like meditation. I should think about my emotions and my ideas. It’s only my time. I only place flowers silently, and I can release my stress. I think the process of creating ikebana is kind of like yoga.”

This is mirrored in her approach to Atelier Soka. For her students, it’s about enjoying the process of transforming the materials of nature into something with greater meaning, not about the precision of rules or the classroom environment.

That’s not to say there aren’t basics that must be learned, but Otani has created comfortable surroundings in Yoyogi-Uehara, Roppongi, and Setagaya (in her home) where stress is left at the door and students can reconnect with Mother Nature.

At Atelier Soka, Otani has many non-Japanese students. What attracts visitors and expats alike to ikebana?

“Everyone wants to start something Japanese,” says Otani. “The starting point is just curiosity. But one month later or two months later, they change. Tokyo is really crowded, but through ikebana, they can really feel nature.”

And that reconnection and expression goes further than one might expect. When we think of ikebana, we most often picture flowers. But Sogetsu can incorporate any type of material that the practitioner wants. This means thoughts and feelings can be expressed through not only flowers, but also plants, wire, plastic, and other unconventional materials. Sogetsu offers incredible flexibility for self expression.

Ikebana opens up a world of emotional exploration: a place where we can express ourselves much in the way that a writer, painter, or musician does. It’s quiet reflection for those who practice Sogetsu, as the arranging is done alone and in silence. Think of it as floral meditation—with Mika Otani as your guide.

Want Mika Otani to introduce you to ikebana? E-mail smile@mika-otani.com or call 080-5099-4461 in English. Or visit www.atelier-soka.com.