A lot of art is about liking what you’re supposed to like, not what you actually like. You could call this the “Emperor’s New Clothes Syndrome,” with casual art viewers terrified of being taken for idiots because they can’t see the purported genius of the works before them.

While this idea seems to have found its particular vogue in contemporary art, it has a much longer history, as can be seen in full at the exhibition now on at the Mitsubishi Ichigokan Museum. 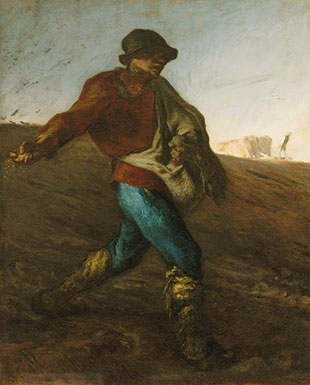 The sacred cow presently on display is Jean-François Millet, one of the perennial idols of French art. Now, Millet is not such a bad artist—but he’s not particularly good either. Luckily, the show—“Millet, Barbizon and Fontainebleau”—has lots of other less famous but better artists to compensate for Millet’s mediocrity. However, the central question has to be addressed: Why is Millet so famous?

The best-known painting here is The Sower (1850), which, through repeated appearances in art histories and encyclopedias, has become something of an icon. It shows a peasant striding across a landscape scattering seed. Looked at up close, however, it seems unremarkable: you see the muddy colors, the drabness, the rudimentary face—most of it in shadow, which makes the figure seems cold and anonymous.

Another famous painting is The Young Shepherdess (1870-73). Here, the face looks like a papier-mâché mask with slits for eyes. Elsewhere, Millet’s figures seem rather blob-like, as if he were designing plastic molds for cheap toys to be included in packets of cereal. The blobbiness not only robs them of character and individuality but also of movement. The Sower seems at first to stride purposefully across the landscape—but he’s essentially a statue made from congealed oil paint.

Compare Millet’s peasants with those painted by the other artists on display here and you see the difference. Jean-Baptiste-Camille Corot’s The Reaper with a Sickle (1838) is a much more human presence, as are the figures in the paintings by Julien Dupré, such as his Children Feeding Geese (1881).

So why are Millet’s paintings of blob people so highly esteemed? The reason seems to have more to do with 19th-century French class politics than artistic genius.

In the period of the Third Republic, following France’s defeat by the Germans in the Franco-Prussian War (1870-71) and the fall of the Emperor Napoleon III, Millet’s paintings of peasants—which look like they might have been painted by actual peasants—became symbols of a new egalitarian France, keen to unify its urban and rural populations in a process of national healing.

The indistinctness of Millet’s figures, with their blurred and unreadable faces, gave them just the right kind of everyman quality for the age, while also making them seem like outgrowths of the landscape. This made them ideal totems to reassert the idea that France was its land and its people, and was, as such, eternal.

Come to this show for the Millets if you must, but stay for the works of the other painters.