A culinary and thirst-quenching feast for the soul

A chorus of noodle slurping, sake sipping, and live entertainment rose from a corner of Yoyogi Park during this year’s Oedo Waen Soba and Sake Festival, held from June 16 to 19. 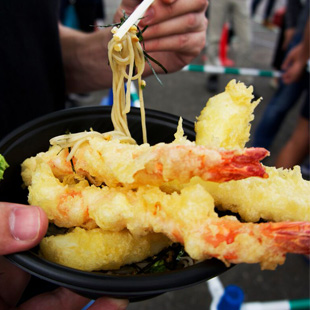 Although a staple and perhaps falsely mistaken as ordinary, soba comes in a vast array of delectable styles in Japan. With a host of simple stores offering both soba and sake, the festival boasted a large variety of dishes to experience soba, including the two classic serving styles: zaru soba, chilled and topped with seaweed nori; and kake soba, which is served in a hot broth topped with scallions. And of course, there was tanuki soba, topped with tenkasu (bits of deep-fried batter), and tempura soba, served hot or cold with soft, succulent deep-fried squid and prawn.

Of the more substantial soba dishes was the hot meat soba from Tokyo, an amalgamation of onions and meat in a ramen-like tangy broth. Another festival favorite was the slightly more filling echizen soba from Fukui Prefecture. This dish was topped with grated daikon and dried bonito flakes, and the stall was bustling with customers from start to finish.

Perfectly paired with a glass of sake was daiginjo soba, from Tochigi Prefecture, another standout dish embracing the festival’s theme. The glowing white noodles are the product of polished rice, which is used in sake brewing.

Soba was available individually at each booth, representing about 20 different celebrated noodle-making regions, including Nagano and Yamagata prefectures, who produce slightly thicker-cut noodles. Tickets (¥700) were available to cover all the basic soba dishes (toppings extra), although dishes could be purchased separately along with yakitori and karaage.

The idyllic combination for soba and sake derives from the Edo and Tokugawa periods, from 1603 to 1868, when every neighborhood had at least two soba establishments that served each. 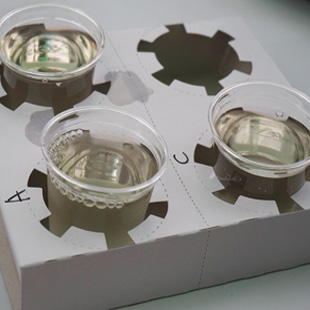 At the festival, single cups of sake ranged from ¥300 to ¥500, but the sampler set, which is the easiest way to get a taste for a few types from one prefecture, cost ¥1,000. (If you’re a novice sake drinker, this is the perfect way to begin your new journey.) With over 100 varieties of sake—including the popular Dassai sake, created in Tokyo in 1990—there was more than enough to see off the weekend.

The Hokkaido, Kanto, and Tohoku regional sake stores had a constant line, with tastes ranging from the slightly sharper and bitter end to the sweeter and more digestible.

Beautifully made sake ware was on display as the perfect take-away gift from a weekend of full stomachs and sake-softened wits.