Taylor Swift completes her transformation in the Tokyo Dome

On Tuesday, May 5, Metropolis witnessed Taylor Swift firmly lay the foundation for the next level of her career. By the end of this first show of “The 1989 World Tour!” as it’s officially called—exclamation included—she had simultaneously set the tone for where she was headed, and had also set the bar at a height almost impossible for her peers to reach. Choosing Tokyo as the first stop of her latest world tour, the “Fearless” singer delivered custom “tayloring” in a way no one else can.

With the fall 2014 release of her latest album and the tour’s namesake, 1989, she altogether dropped the country genre that brought her initial fame. Many anxiously waited to see how this dichotomy might be reconciled in a live setting. As some predicted, Ms. Swift opted to almost entirely eclipse her previous body of work—playing only two songs from her previous albums, while reworking them to fit seamlessly with her current direction. 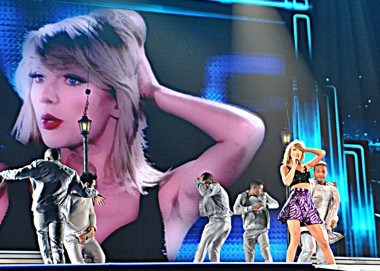 Even before her fans got a glimpse of her face, the mood was set. From center stage hung an immense backdrop upon which the image of a ghetto blaster was projected, emblazoned with pink and blue neon letters spelling out “The 1989 World Tour!” Eighties hits—including Tiffany’s “I Think We’re Alone Now” and “She Drives Me Crazy” by Fine Young Cannibals— emanated from the stage speakers, while only a precious two Taylor Swift songs (and her name in huge neon letters) reminded us who the ringmaster was.

Taylor stepping onto center stage, to the sounds of the show opener “Welcome to New York,” was orchestrated with even more precision focus. Black-and-white closeup footage of herself and her backup dancers drifted across stageside screens, while Taylor’s purple skirt served as an exclusive drop of color; effectively owning the crowd’s focus with hammer-like intensity.

However, for all its careful production, the show’s intended tone was a personal one. Taylor attempted to speak some Japanese (“Moriagatteru?” and “Tokyo, Aitakatta!”) while she addressed the crowd as potential friends. The “friends” theme continued throughout the two-hour show, with video testimonials from her closest famous female friends serving as interludes between songs; each clip leading cleverly into the next musical number.

And to prove that she could hold her own without state-of-the-art technology, Taylor performed two songs standing alone in the middle of the crowd, on a rotating crane, which, until then, had been hidden under the guise of a catwalk. For the first of these (“You Are In Love,” from the deluxe edition of 1989) she played acoustic guitar, and for the second (“Love Story,” from 2008’s Fearless) she sat down at a keyboard and explained the writing process for her latest album, as well as how she chose to rework one of her older songs for this show.

Furthering her exploration of the ’80s theme, the biggest shock for her fans may have been when Taylor donned what appeared to be a Fender Jaguar electric guitar and proceeded to lead her band through a rocking version of “We Are Never Getting Back Together” (from her 2012 album Red), which owed much to Def Leppard’s “Pour Some Sugar on Me.”

When Taylor and her team closed the show with smash hit “Shake It Off,” the audience could hardly expect an encore; and Ms. Swift drove home the point that this was the final climax. All of her backup dancers (bedecked with purple suit jackets and shorts) joined her on the now-spinning crane, suddenly lit up in pink neon lights. As the entire crew danced enthusiastically, each member’s fate hung on just a single safety wire. Then, before taking her bows and making her final exit, Taylor bequeathed her last live message to the audience: “Tokyo, Japan … I love you so much!”

Despite the audience cheering for an encore, there was none to be had. Instead, one last video was played on the three stage screens. This one, of Taylor herself, consisted of the singer attempting to introduce her two uncooperative cats. Finally, white letters on a black screen announced: “No cats were harmed in the making of this tour. Only one pop star.”