Andy Señor, Jr. brings the hit musical back to Tokyo

When Rent stormed onto the Tony stage in 1996, it not only captured the title of Best Musical but also the heart of a young Cuban-American living in Miami. Andy Señor, Jr. had been performing the likes of Pippin and Godspell throughout high school, and knew the path to Broadway was one he wanted to be on—but how to get there had not become clear. Then Jonathan Larson’s story about young artists trying to make a life for themselves in New York City changed all of that.

“I was a Hispanic kid in Miami who wanted to be on Broadway,” explains Señor. “And for many years, I would watch the Tony Awards and I would see these great performances; but I never really saw anyone who looked like me that made me think, ‘you know, I can do that.’ Then when Rent popped on my screen and I saw the guy who played Angel—who looked just like me—who was Hispanic, I was like ‘Oh my God!’ I bought the CD and I fell in love with the music. I fell in love with Jonathan Larson’s message of love and family.” 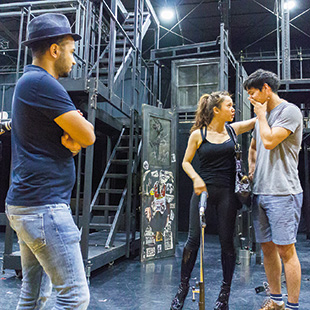 That was the beginning of a lifelong journey for Señor, who went to New York and landed the role of Angel in the first national tour. Recounting the experience, he says, “The moment I heard that whole entire soundtrack, I sat in my room and I was just weeping. And hearing the story of how Jonathan Larson had passed, and hearing this music … I was like, ‘this is me, this is my generation, this sounds like me.’ So when I walked in there, it was more a sharing, versus auditioning.”

That was more than 18 years ago. Over the years, the performer-turned-director has been part of staging Rent all around the world, as part of the international tour, as well as companies in America, London, and even Cuba, where he oversaw the first Broadway musical to be presented on the island in nearly 50 years. It was an experience that connected with Señor’s heritage in a very special way.

“My parents left Cuba during the Revolution and were living in exile in Miami, so I’m the first of the family—and of my community that I know of—to return to Cuba. It was just fascinating,” recalls Señor. 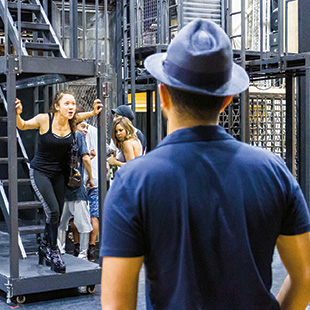 The audience reception highlighted how Larson’s themes can connect with different people in different times. The Cuban people “definitely saw themselves in these characters. One of the first things that Mark, one of the lead characters in Rent says, is, ‘We live in an industrial loft on the corner of 11th Street and Avenue B … All of our electrical appliances are plugged into one thick extension cord …’ So the audience was able to see their living conditions and character in an American musical that kind of reflected the way they lived.”

This September, Señor brings the award-winning musical back to Japan with a new staging at the Toho Theatre Creation in Hibiya, stating that what connects with audiences in other countries isn’t necessarily applicable to Japan.

“For a Japanese audience, it’s interesting, because all around the world, where I’ve done the show and have directed the show, a lot of people’s comments are like, ‘I love Rent, I love this character, and the music is so good,’” he says. “But here in Japan, people talk a lot about Jonathan’s message, which is really interesting to me. The affection of these characters, and the essence of family of these characters, and expression and celebration—which is something that is definitely inside the lyrics of the show … I think that’s something that the Japanese really do connect with. They’re able to live vicariously through these characters.”

Toho Theatre Creation on Tuesday, Sep 8-Oct 9. Details on showtimes and tickets can be found at www.tohostage.com/rent2015.

To hear the full interview with Andy, tune into our new audio feed Metropolis One-on-One at: https://metropolisjapan.com/one-on-one.

A bold and moving adaptation of Ivy Alvarez’s poetry collection

Anna and the Apocalypse