Many westerners don’t know that Okinawa was actually a completely different country with a different language and different beliefs to the Japanese mainland, until about 150 years ago. Japan annexed Okinawa – known as ‘Ryukyu Okinawa’ – in 1879, and started to assimilate the Ryukyu Okinawans into mainland Japanese culture. In Japan, whilst tattoos were seen as a sign of violence thanks to their association with the Japanese Yakuza gangs, in Okinawa hajichi were a normal part of the culture. It was mainly women who had them, tattooed predominantly on their hands by the local shamans.

As the tropical islands became throttled by Japanese mainland views and beliefs, the tattoos, previously a sign of pride and womanhood, became shameful to the Okinawan people, who started to reject them for themselves by the 1950s.

Moeko Heshiki, a hajichā  (hajichi tattoo artist), has started the Hajichi Project in order to bring about awareness of hajichi and Ryukyu Okinawan culture and to spread the hajichi as ‘lucky charms,’ far and wide. We spoke to her about how she tattoos and why she got into it, ahead of the event she is taking part in on 26th February, alongside fellow tattoo artists, Taku Oshima and Tamiki Hanzawa. 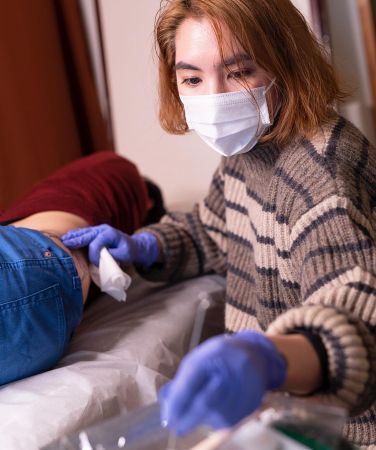 Metropolis: Tell us about yourself.

Moeko Heshiki: My name is Moeko Heshiki. I’m 29 years old and was born and raised in Utsunomiya, my dad is from Okinawa. I graduated in oil painting from Tama Art University. After graduating I lived in Berlin, and started the Hajichi Project soon after. I’m currently based in Tokyo.

M: How and when did you become interested in Hajichi?

MH: I actually first came to know of Hajichi from Pinterest haha..

I kind of just wanted to get a tattoo, and thought it would be good to get something that was related to my roots [family history]. I had a hunch that Okinawa would probably have a sort of tattoo from way back, so I looked and there they were, on Pinterest! I found that pretty funny.

And I ​​genuinely wondered why I didn’t have a Hajichi tattoo. I wanted to get one and from there my interest in Hajichi started to grow. It was about a year after that that I actually got hajichi. 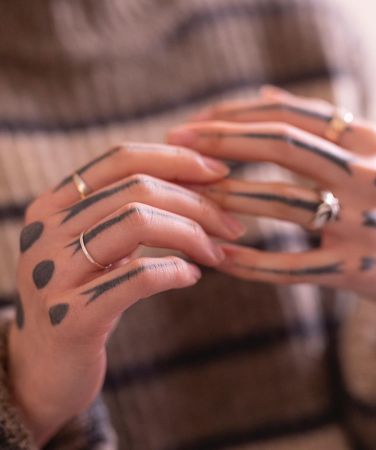 M: Even in 2022, with tattoos becoming more commonplace and slightly more accepted in Japanese society than before, hajichi is still very rare. How did you learn how to tattoo Hajichi? If you had started hajichi 10 years ago, for example, do you think it would have been harder to practice?

MH: I don’t use a machine to tattoo, I handpoke, which is closer to the original method of Hajichi. I learnt how to handpoke from Hanzawa Tamaki, as she did the Hajichi on my left hand. I really admire her. She’s really helped me in my public and private life.

I can’t even imagine what it would’ve been like if I’d started 10 years ago… But I guess that if it had been 10 years ago then it would’ve been just after the Tohoku Earthquake. Around that time there was a lot of uncertainty in the world, so I think there would have been a demand for tattoos. But regarding tattoos now it’s way more relaxed so I think that it’s a much better situation to be in, compared to 10 years ago.

M: Hajichi requires specialized tools such as bamboo needles and Ryukyu awamori alcohol. I also read that long ago, hajichi was performed on women by shamans. I’m guessing you’re not a shaman… (lol) To what extent do you stay true to the hajichi practice and what things have you changed? How do you source the more specialized items?

MH: Well… Maybe I am a shaman (lol). During his Ethnic and Folk Art Course, one of my professors at Tama Art University, Reiji Andō, told us that maybe artists are modern day shamans. I really liked this phrase, it really resonated with me. I guess that we are, in a way.

Hajichi is done using a method called ‘handpoke,’ which involves using a needle and ink. The ink used in the past was a mix of Awamori and squid ink, so I just change the squid ink.

I don’t use any specialized tools. According to nowaday methods, I can prepare everything hassle-free – quickly and easily. It’s more realistic. I believe that, in order to preserve the traditional methods, it’s important to update them and bring them into the present day. I think it’d be nice if everyone was able to do hajichi themselves, like, tomorrow or something haha. I think that’s the beauty of tattoos.

With regards to hajichi, there are records of girls around 6 years old, just tattooing each other for fun. I do think that the hajichi that most women used to have had that kind of playfulness and frivolity.

That’s why [I think that] hajichis don’t really differ from the mainstream hand-poke styles in Europe and America. Of course, I think that traditional styles of hajichi are important and sometimes I do those too. Changing the ink, for example.

But as a Hajichā, I’m really interested in actually using bamboo needles and other materials, to do fully-blown hajichi. 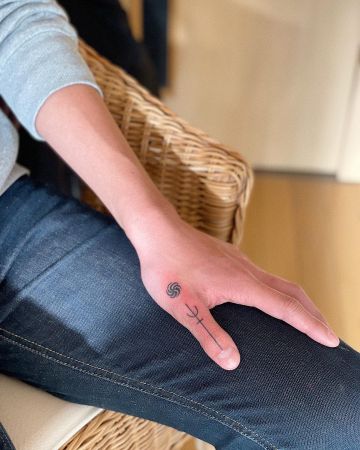 M: Hajichi was banned for many years by the mainland Japanese and it has been said that by after the war, Okinawans themselves became like Japanese people in their growing distrust of tattoos. By the 1950s, Okinawan women had almost completely refused them for themselves. Have you faced any negativity or stigma since you started?

MH: Yes, that’s right. My great grandmother had hajichi but by her childrens’ generation – my grandparents’ – the stigma around hajichi had increased. And my parents’ generation too.

As part of the Japanese assimilation period, my grandparents’ generation (those born from Taisho to Showa periods) were taught in Japanese, known as the ‘common language.’  I think there is more than a little awareness that this was the reason why Japanese things (as opposed to Okinawan) were seen as cool and high status, even in Okinawan society. In the midst of all this, the Ryukyu-Okinawan culture, language, traditions, and customs began to decline. Hajichi is one of them.

So if I could ask my Okinawan grandparents what they thought about hajichi, I think they would have a negative opinion. This is just an assumption, though.

I haven’t had any prejudice or negative comments from my friends or people directly around me but I noticed that in the art world, there is less respect for tattooing when compared to other art forms. They wouldn’t say anything to me directly but I get the feeling that there is a lot of implicit bias about. But I actually had quite a bit of bias about it myself [when I first started].

Also, I’ve had someone who isn’t Japanese say that labeling hajichi as Japanese tattooing culture is cultural appropriation against indigenous Ryukyuan Okinawans. But in all honesty I never personally felt that the Okinawan culture was indigenous. Japanese culture and historical events aren’t exactly black and white so can be interpreted in different ways. I think that it’s something that we need to educate ourselves about all the time. 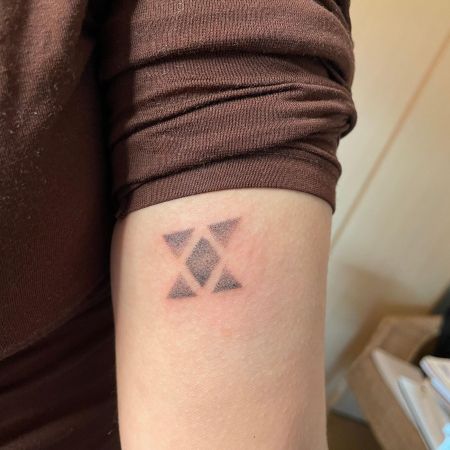 M: You mentioned that as you can’t speak certain dialects of Okinawa you don’t know what some of the tattoos mean. I thought this was a very interesting point. Can you elaborate on this? Have you come up against any other particular obstacles when trying to practice hajichi? To what extent do you feel that obstacles are directly related to hajichi, as opposed to irezumi?

Mh: In Okinawa, there are so many different dialects that they say that if you take a different road, the language will be different…

So for me, it’s especially difficult and confusing because the dialect that the women used from 1935 and 1970 isn’t really spoken anymore. It’s a real obstacle – even if I look stuff up I still can’t understand anything. I definitely think that I need to do more research, though.

Also, I refer a lot to research by someone from mainland Japan who interviewed 90 year old women in Okinawa, but since it’s an interview, I think the answers and words can be pretty ambiguous (laughs).

Yes, it’s an obstacle but I do think that it’s a really interesting one.

M: Before 1879 when hajichi was commonly practiced, most people with hajichi tattoos would be Ryukyuan women, who had them solely on their hands. Nowadays, what are your customers like? Do they tend to have tattoos on their hands or are there other popular placings?

MH: I have loads of different types of customers come through, from Japanese through to customers with Okinawan roots (Uchinaanchu) and people from abroad too.

I have absolutely no problem with tattooing on people who aren’t Okinawan, although I do think that respect (towards the Okinawan/hajichi culture) is necessary. At one time, it was embarrassing to have hajichi so I want lots of different types of people to get hajichi and spread [love for] the culture. And I hope that the tattoos bring luck (like a lucky charm) to the people that have them.

Customers often get hajichi on their chest. In Japanese society it’s still a taboo to have tattoos. If it’s on their chest then other people won’t spot it. It’s (the taboo) such a shame and I find it totally frustrating. 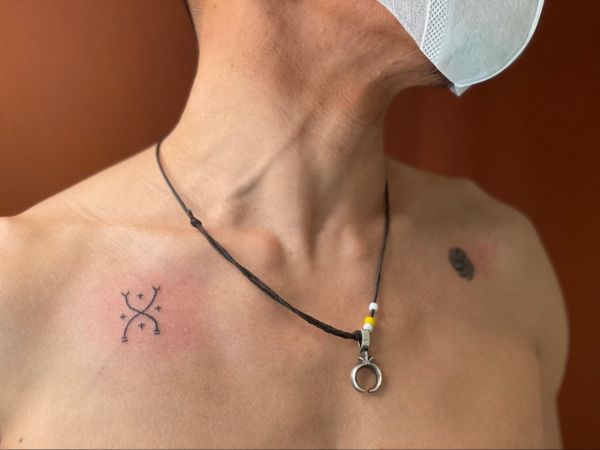 M: There are many different styles of hajichi, from Miyakojima through to Ishigaki. Do you have a favorite?

MH: I have tattoos from the Okinawa mainland so I guess that the mainland style is my favorite (laughs).

M: Unrelated – can you tell us about your top five hajichi tattoos?

MH: I think the Aman (hermit crab), with lots of varieties, is very interesting. It’s so powerful and fascinating. In Ryukyu Okinawa, there is a legend that people actually came from the Aman world so it’s a pretty special tattoo. 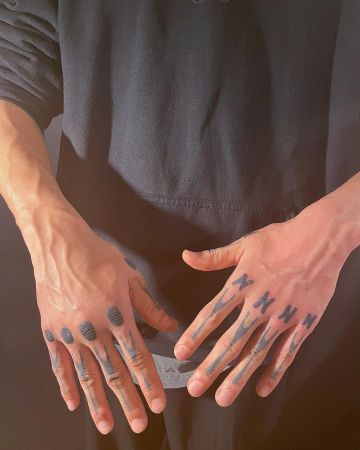 MH: So, I got tattooed by the tribal tattoo artist Taku Oshima, who did hajichi on both my hands during his Hajichi Campaign (he tattooed anyone who wanted to have a hajichi for free), and Tamaki san. A big reason as to why I started the Hajichi Project is down to these two mentors. They kindly asked me to join them [practicing hajichi].

We met the Bonobo people at the Oneness event and just rolled with it! I never thought we’d be able to do it in Bonobo of all places so I’m really happy that we can. It’s wonderful that so many different types of people are interested in hajichi.

MH: Thank you. The event is divided into two parts – afternoon and night. During the afternoon you can get hajichi hand-poked. The deadline to reserve has already passed but you can also get one on the day.

M: Thanks so much, Moeko!

For more information about the Hajichi Project, check out her Instagram
For information on the Bonobo event which takes place on 26th February, check out: www.instagram.com/hajichi_kai