Food education is regulation in Japan

When lunch bells ring at Japanese elementary schools, instead of students flocking to cafeterias to eat miscellaneous meat in various shades of beige, or to the playground to eat class-divisive packed lunches, it looks something like this: students set their classroom desks with a luncheon mat, chopsticks, cup, and toothbrush for post-lunch dental care. Then, a group of students on lunch duty for that day don an outfit akin to a factory line worker — apron, cap and surgical mask — and run through a hygiene checklist (cough? No. Fever? No. Sterilized hands? Yes) before divvying out nutritionist-curated meals prepared by licensed chefs, and all sit down to dine together with the teacher. This is all wrapped up with a group tooth-brushing session, then back to studies. And this happens daily.

This kyushoku (school lunch) regime is part of Japan’s 2005 Food Education Law, a regulation passed in recognition of the importance of shokuiku (food education), with the objectives of “fostering understanding, decision-making and eating habits for an appropriate diet,” and supporting “further appreciation of the gifts of nature that support us, fostering respect of life and nature and encouraging a spirit of environmental conservation.” Such education is particularly salient in the current global climate of childhood obesity and food waste epidemics.

But the origin of this uniquely progressive approach to school lunch goes back much earlier, to around the time elementary school was made compulsory in Japan. When a Buddhist monk-run school in Tsuruoka City, Yamagata Prefecture realized in 1989 that many children were too poor to bring lunch, they provided it for free — some rice balls, grilled fish and pickles. Over the next few decades the rest of the country followed suit, and a monument now stands outside the Yamagata school marking it as the “birthplace of the school meal.” Following World War II, school lunches were leveraged as a way to revive undernourished children after the food shortages suffered during the war, and the nationwide provision of nutritional lunches was legislated in 1954 with the School Lunch Law. 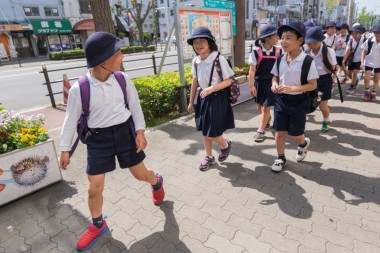 Meal planning is handled with the care of a curriculum — a school dietician meets with municipal officials and school staff to plan meals and associated educational takeaways. Monthly meal plans are printed and sent home with the students, covering ingredients, calorie count and nutritional details, and mapping explanations for the placement of dishes on a lunch tray. Some schools invite parents to an annual tasting of the lunch menus.

Kyushoku meals are prepared either at local centers or on school premises, with municipalities paying the labor costs. Parents are billed monthly to cover ingredients costs — about ¥250 to ¥300 per meal — and low-income families can receive reductions. This egalitarian approach to balanced, healthy eating is in fairly stark contrast to healthy eating movements in other countries. In Britain, Jamie Oliver’s School Dinners campaign folded under the public opinion that eating well is “an indulgence of the middle classes,” despite claims by economists that the healthier dinners introduced by Oliver had significantly improved pupil’s test results and decreased sick days.

Kyushoku menus use seasonal and local vegetables — some even grown at the school and tended to by students — and feature regional speciality dishes, international dishes, special menus for festive and cultural celebrations, and a general emphasis on variation and nutritional balance. The carb component is most often rice, but might also be noodles or bread; the protein is meat, fish or tofu (prepared as meatballs, boiled eggs, chicken patties, fried mince, pork dumpling or curry); the soup is miso, clear Asian soup or Western-style tomato or pumpkin soup; the vegetables are both cooked into the dishes and served as different types of sides. Dessert is only occasionally served, and may be a piece of fruit or jelly. Note the distinguishable lack of processed or high-sugar foods.

Children learn about what is needed for a balanced meal based on different color categorisations: red is for blood, meat and bone, representing the nutrients that build bodies; yellow provides heat and power, and energy; green tones the body and helps prevent illness and disease. A generalisation, but it’s a leg-up in nutritional awareness. Beyond teaching nutrition, though, the students learn about ingredients, seasonality, serving and clearing up, recycling (milk cartons are broken down, rinsed, dried in the sun and then stacked for disposal), hygiene, food production, and diplomacy — leftovers are awarded to the winner of janken (rock, paper, scissors).