70 kilometers of two-wheeled fun and adventure

The sky glowed pink when we got off the train in Onomichi, Hiroshima, and unpacked our bicycles. My husband Richard and I stopped for maps and boarded a small ferry, accompanied by a few high school students and a lone salaryman. Ten minutes later, we landed in Mukaishima, our first stop on the Setouchi Shimanami Kaido. 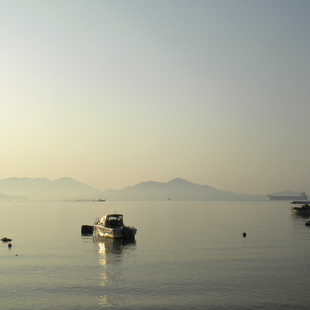 Completed in 1999, the Shimanami Kaido is a 70-kilometer cycling route. It strings together six small, secluded beach islands, and soars over Japan’s Inland Sea on some of the world’s longest suspension bridges to culminate in Imabari, Ehime. Bilingual maps offer information about hills, sites, and ferries. Bike rental is also available, starting at ¥1,000 per day. Onsen, cafés, campgrounds, and bicycle-friendly hotels line the route along with temples, museums, and the occasional castle ruin.

“The guy said to follow the blue line,” Richard muttered as we looked around. Sure enough, we spotted the sky blue that marked our way, and were soon en route to our first campsite.

The next morning, it took us to the first bridge. Innoshimabashi is a 1,270-meter-long suspension bridge where riders marvel at the islands dotting the channel below before arriving at Innoshima. There, we stopped at Umaya, a funky little restaurant, for spicy wild boar curry. Next door at one of the many michi-no-eki (roadside stops), we sampled citrus fruits from nearby orchards.

From there, we pedaled past the Innoshima Flower Center and fields guarded by well-dressed scarecrows to Ikuchibashi, the 790-meter-long bridge to Ikuchijima. We paused at Dolce for rest and gelato made exclusively from local fruit. Before camping at Sunset Beach, we visited Kosanji Temple, famed for its white marble garden, and the Ikuo Hirayama Museum. An artist and activist, Hirayama was an atomic bomb survivor famed for his Silk Road and desert landscape paintings. 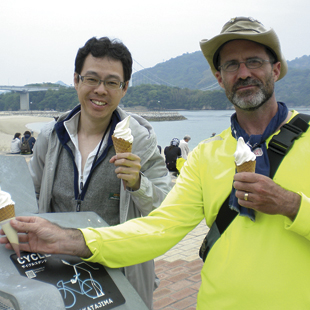 Tatarabashi Bridge carried us to Oomishima and Ooyamazumi Jinja. Founded in 594 AD, it’s one of the oldest shrines in western Japan. “We came here to pray when I was a child,” said Naoki, a fellow camper, and part of a long history of worshippers that included warriors, fishermen, and sailors. The shrine, with its nearly 3,000-year-old camphor tree and 14th-century architecture, is also home to Japan’s largest samurai armor collection.

“I am really impressed with the hospitality for cyclists here,” said Tomo, who told us this was his third year in a row here. Undoubtedly, it’s the people that make this ride unique. We heard more than one “Gambatte!” as we rolled past fields and orchards or wound through villages. On busy weekends and holidays, volunteer Trail Angels descend with water, homemade lemonade, and slices of cold fruit.

“I can see why Tomo comes back,” said Richard when we stopped on Kurashima-Kaikyobashi, the over-four-kilometer-long bridge to Imabari. I nodded, mesmerized by the swirling water below that once defied pirates and impresses tourists today. This ride might be done, but we’ll be back.