Get up close and personal with the kings of the sea

For underwater adventures, most scuba divers in Japan tend to flock toward the warmer waters of Okinawa or volcanic islands of Izu. Both destinations offer dives worthy of a National Geographic shoot, but can be quite costly in terms of accessibility. However, for those busy Tokyoites who lack the funds and time to whisk themselves away on a jet plane or speedboat, another option solves this dilemma. Located just a few hours from downtown Tokyo lies Tateyama, a rather sleepy fishing town located on the southern tip of Chiba. Here, divers and international photographers alike have discovered the joys of the “Shark Scramble.” Yes, sharks—but don’t shudder and turn away just yet.

Tateyama is a relatively ignored destination outside of the summer season, when city dwellers descend on its beautiful beaches and vie for a chance to see the bioluminescence at night. But in recent years, tourists have also been drawn to the area to dive with English-speaking guide, Kan Shiota, and his company Bommie. It’s a small diving operation, nestled on a quiet seaside road. Most divers opt for two boat dives (¥16,500), enjoying Tateyama’s underwater attractions: mainly shy seahorses, giant cod, purple coral, and eels galore. 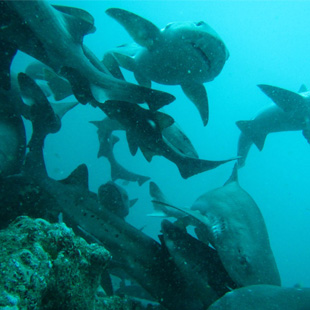 These days, however, Bommie has been inundated with crowds of fearless divers, interested in seeing the aptly-named site, “Shark Scramble.” It’s here where divers have the chance—really, more like a guarantee—of swimming in shark-infested waters … that is, being surrounded by dozens of banded houndsharks and their red stingray friends. But fear not: the sharks are docile, barely two meters long, and swim among the divers like cats circling their owners during feeding time. Conveniently, the site is close to shore, requiring only a five-minute boat ride.

The sharks and rays gather there for a simple reason: they are lured with chum (fish parts). And while the practice of feeding wild animals is usually not condoned—especially in the case of sharks—Tateyama is quite unique, as the act of feeding them has essentially saved their population. 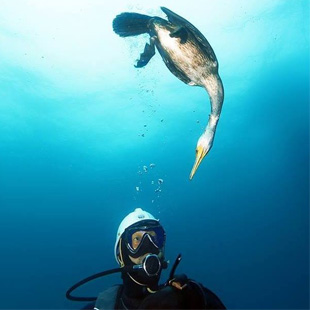 Before the diving site took off in popularity, the sharks were often accidentally caught by fishermen nearby in heavy nets, who targeted other species. In turn, the sharks would feed on the catch and destroy the nets in confusion. The embittered fishermen would sometimes kill the sharks or maim them as punishment, by cutting off a fin. Some of the finless sharks can be seen in the Scramble, effortlessly swimming despite their handicap and affectionately nicknamed by the dive instructors.

After a while of this, the managing director of the local fisheries cooperative hatched a plan to convince a dive operator—cue Kan Shiota—to lure the sharks away. Five years on, the plan continues to succeed, and fishermen have reported that the number of sharks swimming into the nets has dropped to about one-20th. As a shark conservationist myself, the Shark Scramble proves to be an inspiring example of locals working together for a win-win solution.

The feeding has also brought in shark tourism, both domestically and internationally, giving visitors a face-to-face opportunity to learn about these misunderstood creatures. Japan actually has a very diverse shark population and most species, contrary to Hollywood stereotypes, are quite shy and want nothing to do with us humans.

Yet despite being a global hotspot for scientists, Japan also greatly contributes to shark finning. Every year, thousands of sharks are killed in Japan, causing great damage to the world’s ecosystem and decimating a creature that’s survived since the time of the dinosaurs. And although more people die each year from selfie-related accidents than from sharks, there are few opportunities to support their existence. 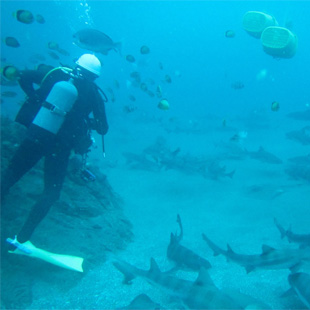 Down in the Scramble, I was definitely in my happy place. The sharks ignored me for the large part, so I just took a seat and enjoyed the sensation of them exploring the space around me. Once in a while, a shark took an exploratory nibble but never pierced through my wetsuit or gloves. They were like big puppies. To be honest, I found the stingrays the more aggressive of the bunch. They would often suck on my face, head, or hair like a toothless grandparent. I was allowed to feed the sharks, but they never behaved aggressively. In fact, the sharks seemed very Japanese—they waited patiently in line.

There are few badass opportunities in life like the Shark Scramble, especially ones so conveniently located. Go for a Sunday dive and come into work on Monday with bragging rights. “Hey, I pet a shark yesterday. You?”