Skiing Inside a Volcano

Hiking Mt Yotei without a guide

By now, the top can’t be more than a hundred vertical meters above. I struggle to even dent a foothold into the wind-swept mounds of ice, as I attempt to make the next step. My only handholds are small, twisted trees which cling defiantly to the scoured rock face.

My body and mind are increasingly weary. Each time I look up to where I can see the snow and ice meet the sky above me, I pray it is the very top – the summit I have been longing to reach for over six hours now. Knowing I am so close, I begin to imagine the thirst-quenching cup of tea and appetizing pre-made meal of spaghetti and meatballs that I will treat myself to at the top.

However, whilst I fantasise, I am swiftly reminded that any lapse in concentration results in a clunk to the back of the head from the skis strapped to my backpack. My foot slips into a tree-well. On all fours, I scramble up a few more metres, forcing myself back to my feet. I climb up to the next ridgeline, now the third which I had wholeheartedly believed to be the top. It wasn’t. But to my relief the summit is now finally in sight.

The hard-part is over. I can see people milling around, relaxing and chatting just a few strides above. For the final twenty vertical metres the incline is far less strenuous. Less than five minutes later I am finally at the summit of Mt Yotei. 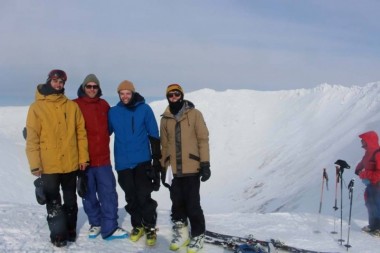 Mt. Yotei is a dormant volcano that sits at the heart of south-west Hokkaido. At an elevation of 1898m, it towers over the world-renowned ski resorts of Niseko and Rusutsu, famous for their powder snow. Its resemblance to Mt. Fuji is uncanny. So much so, that it is also known as Ezo Fuji – ‘Ezo’ being an old word for the island of Hokkaido. On the few occasions that it is unblemished by cloud and displayed in all its glory, it is a mesmerising natural attraction and an enticing challenge to any ambitious hiker.

The false tops and negative thoughts on the way up blissfully transform into a rush of endorphins and a sense of achievement once atop the mountain. A euphoric atmosphere radiates around the dozens of people who have also chosen today as the day to climb Mt Yotei, with strangers congratulating each other on summiting.

It is no coincidence we are all up here today. The conditions are almost perfect; there is a barely a cloud in the sky and the winds are hardly more than a breeze. There has been recent snowfall, but enough time has passed for the new layer to consolidate and the avalanche risk to be low. It is the first day of the season that the weather has been so ideal for summiting. Nothing signified this better than the ant trail of hikers marching up from the Makkari route.

Picking the right day to attempt Yotei is the first thing to take into consideration. Check the weather and mountain forecasts. Look for a day or two with low winds and clear skies and earmark those days in advance (though you won’t know for sure until a day or two ahead of time). Check online (http://niseko.nadare.info) for avalanche information on Niseko. Bear in mind there are no avalanche reports for Mt. Yotei but the Niseko reports will give you a good indication of the risk level.

The Makkari route, on the south side of Mt. Yotei, is the most common hiking route and recommended for less-experienced climbers. There is an easily accessible car park at the bottom and the hike is the most mellow. There is no designated trail to follow to the summit, so it is important to have a meticulously planned route, using Google Earth and various topography maps. 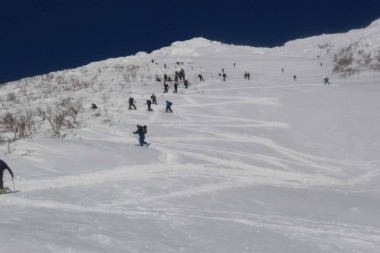 Our group certainly fell in the inexperienced category. All four of us had completed an avalanche course a month earlier but it was the first time we had used ski-touring equipment, learned about avalanches and how to find a transceiver buried in the snow. Mt. Yotei was our first time backcountry touring without a guide.

We started hiking at sunrise and were fortunate to have a track to follow. Sam and I had been up to the tree line on our avalanche course so we knew the route we wanted to take. Early on we made the mistake of dilly-dallying, taking too many pictures and sympathising far too much with our friend Henry, who was nursing nothing more than a mild hangover. It should go without saying, but drinking anything alcoholic the night before is not recommended.

After that we made reasonable progress up until brunch. Henry lagged behind the rest of us but it was no issue; we had plenty of time. Yet the gradient began to steepen, we could no longer use skis to hike up. It was then that we had to boot-pack, proceeding on foot with our skis strapped to our backpacks. This is when we encountered our first serious problem. Sam, still hiking up on skis, 100 vertical meters below me, suddenly found his binding had become detached. I was unsure if he could continue. We were so close that the thought of turning back created a real dilemma for me. I knew if Sam asked that I should turn around but at that moment I couldn’t say for sure that I would have joined him before summiting myself. I have since ascertained that this irrational state of mind is known as ‘summit fever:’ a compulsion to reach the summit at all costs. Thankfully, Sam quickly chucked his skis on his back and began boot-packing. The dilemma was resolved. 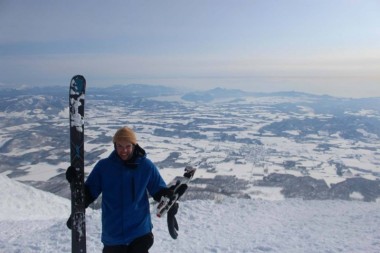 The view from the summit is stunning. The sea is visible in both directions; the Sea of Japan to the north and Uchiura Bay to the south. In between the two are the rolling peaks of the Niseko-Annupuri mountain range, including Mt Usu, an active volcano that separates the idyllic Lake Toya and the sea, and Mt Shiribetsu, a dainty mountain known as Mt Yotei’s wife.

Once we polished off our pre-prepared meals and finished snapping photos, we turned our attention to skiing the crater. Sam sensibly opted out of the crater lap and got help from another summiteer to get his binding into a ski-able state. Henry calculated that a crater lap equals more hiking and decided to keep Sam company.

So it was down to Tom and I, picking our line down before traversing a quarter of the crater ridge to our starting point. We dropped a small cornice before skiing into the bowl shaped crater. The snow was no more than shin-deep but it was so light and soft that it felt like we were floating all the way down. At the bottom, all you can see is a surrounding colosseum of sharp spines of snow and blue sky above. To be standing in the middle of a volcano crater felt unimaginably surreal. It is so peaceful so it’s hard to fathom that thousands of years ago it would have been filled with lava, ready to erupt.

After hiking out of the crater, the final task was to get back down to the car in one piece. Skiing down is meant to be the easy part. But we had to keep our wits about us, having slightly lost our bearings after the crater lap. Wisely, we checked the photo we had taken in the car park looking up at the route. We located ourselves and the valley we needed to follow and chose our way down. The skiing was fantastic; above the treeline, there were steep open gullies with sublime dry powder snow. But it wasn’t until we were in the trees that we truly started to relax as we cruised down to the car in the shallower terrain. 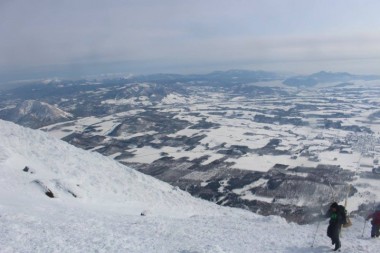 At the bottom, we laughed, smiled and shared a few laboured fist pumps. Our contrasting emotions of happiness and exhaustion epitomised the incredible experience of the day. It was not without incident but it was a day to remember.

Want to attempt Mt Yotei? Here is what you need: