Falling into the strange world of mukbang

Japan has long had a playful relationship with food. Some of the world’s top competitive eaters are from this archipelago, contenders consistently surprising the world stage with their “underdog” petite sizes and endless appetites. Beyond the daytime television programs that show unexpected individuals gorging away at quantities of food which can be difficult to comprehend, there are shows that dare guests to bite what may be a chocolate shoe or, in actuality, just a shoe; even programs that focus on the fake food displays we see everywhere in Tokyo. Many individuals have made their careers on YouTube with mukbang (live streaming themselves binge-eating large quantities of food).

The relatively new career path has exploded in popularity in Japan, but the fact that in English we still use the Korean term (mukbang) highlights the rare newness of this phenomenon. We can’t help but wonder — how does someone even get into this career?

Dracö is one such YouTuber (whose channel is called Dracöがたべしなに, or Dracögatabeshinani), with over 420,000 subscribers. He has had over seven million views for some of his videos, and is particularly popular for his heavy-food episodes, particularly his ramen and meat-eating videos. Metropolis spoke with Dracö about how he started this career and what it means to be a “mukbanger.” 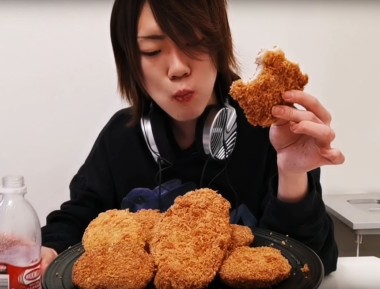 Metropolis: How did you begin your career as a competitive eater and YouTuber?

Dracö: Initially I didn’t intend to be a food fighter or even a YouTuber, but that’s what life brought me. I was going to be an academic. One day, a friend recommended I go to Jiro so I went and filmed myself. [I posted the video and] When my ‘mentor’ found me, I went with the flow. Now I’ve made it this far.

M: Eating large proportions of food at one time seems to be uncomfortable. What are some of your strategies and techniques that help you avoid discomfort and other issues after eating?

D: This is a frequent question, actually, but it really depends on your constitution. For me, deceiving my mind is the key. I always think of something aside from the actual food itself. For example, I think of how much food there is left, or how much time I have left or how many more bites I need to take. I sometimes read off some famous novels in my mind … I’m pretty sure no one else does that.

M: Do you still enjoy the food you eat in big portions?

D: This also depends. If it’s a food challenge, I sadly can’t enjoy it much — I have to be careful of the time. When it’s for my YouTube channel, where I have no time limit (people don’t believe I do), I often enjoy eating, thinking “this is really delicious,” or “I’d put some pepper on this if I weren’t on camera.”

D: I think a majority of mukbangers find sweets hard to eat. Sometimes they’re only able to eat half as much as they usually would [were it not something sweet]. Personally, I really struggled to eat rice until recently.

M: When you first decided to become a mukbanger, did you have any fears or concerns?

D: The reason I started trying to earn from YouTube is I had no other choice. I just had to do it for my living, I didn’t have any passion, no concerns. And I remember, I apologized to my fans all the time for this. After a few years, I became more invested in my career and that’s when I started to have concerns.

M: Could you share with us one of your favorite experiences with food?

D: Well, ramen is probably one of the most common dishes for food fights in Japan. For me too, it’s an important dish — when I started my YouTube channel, the first thing I ever tried to eat as much as possible of was ramen. I’ve had to eat ramen under terrible conditions, I’ve had to overcome a lot of these sort of challenges with ramen. I have a great relationship with my favorite ramen shop. Ramen has so much to do with my life. It was also sort of a treat for me when I was a kid.