Roppongi feels the power of the Force

Return of the Jedi may have premiered in 1983, but the title is an apt description of our present day. Star Wars is back with a vengeance, thanks to Disney’s purchase of Lucasfilm. The Mouse has breathed new life into the popular but largely dormant franchise. Now, everywhere you turn, there’s a little bit of The Force binding your galaxy together. 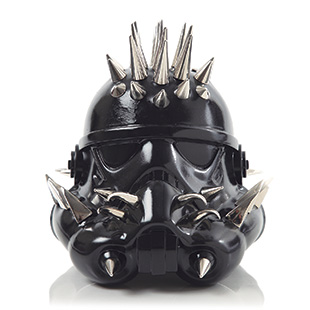 Movie theaters and television aren’t the only places splashing images from far away into our lives. The Mori Arts Center collaborates with Disney to bring “Star Wars Visions,” an exhibition of art inspired by the films, to the 52nd floor of Roppongi Hills’ Mori Tower. This showcase of works from various artists opens alongside the newly renovated Tokyo City View observation deck, and highlights the diversity of interpretations of the Star Wars universe.

Curated by George Lucas himself, “Star Wars Visions” gathers more than 60 pieces from artists such as Syd Mead, a visual designer known for his work in sci-fi films, and Yoshitaka Amano, who worked on the character designs for the Final Fantasy series.

Also part of this collaboration are over 100 pieces of concept art from the Lucas Museum of Narrative Art, along with costumes and props that were actually used in the six Star Wars films. Set to open in 2018 in Chicago, the Lucas Museum of Narrative Art is a new-style museum that will have illustrations and visual arts presented in a way that’s unlike any institution before.

What Tokyoites will get when the doors to “Star Wars Visions” open on April 29 is a taste of Lucas’ vision for encouraging and spotlighting artists who bring us incredible views of other worlds.

The exhibition will also help prepare fans for the next installment in the story, Episode VII: The Force Awakens, which will hit theaters in December. May 4 marks Star Wars Day (“May the 4th be with you”), when the exhibition and surrounding areas in Roppongi Hills will hold commemorative events. Visitors will also have the opportunity to have their photo taken with Darth Vader on the rooftop observation deck, 270 meters above sea level. Make the Sith Lord angry and that could be 271 meters for you. 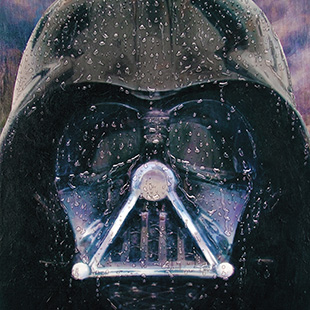 “Star Wars Visions” is divided into six sections, each focusing on a specific symbolic aspect of the series.

The Original Visions presents the origins of Lucas’ inspiration, designed by artists on request to portray a realistic “old-style space” based on what they remember from seeing the Apollo spaceship covered in soot returning to earth.

Vision of Force focuses on the two opposing sides of Star Wars: The Light and the Dark. Along with the symbolic Jedi and Sith lightsabers, Vision of Force showcases art within the theme of “Force.”

Vision of Battle presents famous battle scenes from the franchise. A compilation of the main battles and blasters that were used on set will be on display.

Visions of Saga collects costumes and props used on set for Luke, Leia, Han Solo, Yoda, and Obi-Wan Kenobi; film clips from important scenes in the series are displayed alongside.

Vision of Galaxy showcases pieces that vividly portray creatures from the many planets seen in Star Wars, including a statue of Jabba the Hutt and a screen-used Ewok costume.

Vision of Droid compiles clips featuring C-3PO and R2-D2, the two droids that have become symbolic of Star Wars over the years.

Tokyo City View is the first stop for Star Wars Visions before the exhibition moves around the country, and will run through June 28. During this time, the Star Wars Exhibition Special Shop and 12 stores inside Roppongi Hills will offer limited edition items. Tickets run ¥1,800 for general admission, ¥1,500 for seniors 65 and over, ¥1,200 for high school and university students, ¥600 for children aged 4 through middle school.

Want to hear a good movie?