Patrick Smith aka ‘thepaperpat’ opens up about his experiences

It was storytime in Patrick Smith’s kindergarten classroom, where he teaches English in an after school program in Tokyo. His pupils gathered beneath a colorful poster of the vocabulary word “children,” which depicted a row of young faces from various backgrounds, when one boy looked up at Smith’s face and called it “dirty.”

“Honestly when he first said that, it made me laugh,” Smith says. “I’ve taught kindergarten-aged kids for the last three years and I’ve heard so many comments from the kids about my skin color.” Smith, a Black man who grew up in Flint, Michigan and has been teaching in Japan for six years, described the incident in a 58-second video on his TikTok account, which currently has over 513,000 followers. Black Lives Matter Tokyo retweeted the clip, in which Smith explains to the class that, “there’s nothing wrong with being brown.” In the comments, people commended Smith’s handling of anti-Blackness in his classroom.

This happened today. It starts when they’re young. (I teach English in Japan) pic.twitter.com/p7PNUx2pCE

It wasn’t the first time that Smith posted about his experiences as a Black person in Japan. Known on TikTok as “thepaperpat,” Smith often talks about feeling alienated, albeit in the form of comedic, bite-sized videos which rack up hundreds of thousands of likes. His first “semi-viral” video is about Japanese people constantly staring at him because he’s Black, and his onsen series, wherein he reenacts awkward reactions at public baths, is also a hit. Then, there is the occasional rendition of five-year-olds whose shocking remarks include calling Smith “Mr. Blackface.” 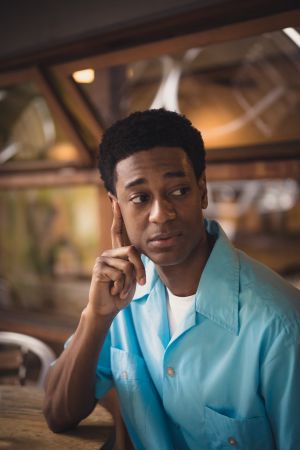 TikToker Patrick Smith aka thepaperpat has been teaching English in Japan for six years. Photo by Ken Shikura (@kentotster).

“[Children in Japan] are not used to seeing people who look like me. They’re not used to seeing people with dark skin, so they’re going to be curious about it,” Smith says, stressing that he’s never once been angry or upset with his students. More often than not, an offensive comment leads to valuable conversations about diversity. Part of Smith’s method is to ask the children to guess why his skin is brown (so he can hear their “funny theories”) before giving them a simplified explanation of the word “melanin.” He hopes to eradicate misconceptions about race, particularly those that negatively affect Black and brown communities, in a country whose population is 98.5 percent Japanese.

“One of the things I want to focus on is bringing more awareness to how Japan has the issue of racism, like all countries in the world do, since there are so many Japanese people who are under the impression that it is a Western problem only and it does not affect them,” Smith says. Anti-racism marches in Tokyo, Osaka and other cities following the death of George Floyd have helped shed light on Japan’s own racial ignorance, duly illustrated by NHK’s tone-deaf attempt at explaining America’s Black Lives Matter protests.

Not all prejudices make it onto national TV, however. In June, Smith was on his way to get a haircut in Roppongi when he was stopped by three police officers who claimed they were conducting random searches on people in the area. “I knew it was because I was Black,” Smith says. “There were lots of foreign people walking around, including people who were white, but they came for me.” Having grown up in America where, as Japan Times columnist Baye McNeil puts it, “your very life or livelihood is in jeopardy constantly” as a Black man, Smith was hardly surprised by the officers’ actions.

They know how to hit below the belt pic.twitter.com/zya1bcYI9w

Smith’s encounter is reminiscent of an incident in late May, in which two police officers pulled over and injured a 33-year-old Kurdish man in Shibuya. The officers’ actions were denounced as racially motivated, fuelling Tokyo’s budding movement against police brutality and injustice.

In addition to entertaining half a million fans with lighthearted, comedic content, Smith wants to wield his platforms, as a content creator and educator, into spaces for meaningful conversations. “As a Black man, it’s important for me to lend my voice to this discussion,” Smith says in a TikTok posted shortly after George Floyd’s death. He describes the video as the first “heavy” content he’s posted on his account. Since that post, however, Smith has remained true to his word, speaking up about his own experiences with racism on the app itself. “I want to be more open about my experience with these things,” he says.

Not Somebody Else’s Problem

‘Hanasou’ urges people to talk about BLM in Japan

Black Lives Matter: How to Help and Where to Donate

Racial injustice is not just America’s problem. Here’s what you can do to take a stand.