Paint and sip at ArtBar Creative

They say that alcohol can dramatically improve your foreign language skills. But can it also improve your artistic talent? Find out at ArtBar Creative, a studio in Tokyo riding the popular “paint and sip” wave sweeping across the United States and Canada.

For those who’ve been living under a rock, the idea behind paint and sip classes is rather straightforward: get a little tipsy—if you choose—and attempt something that few people have a natural talent for: painting. All art supplies are included, and most studios allow participants to bring their own snacks and drinks. Basically, watch yourself magically transform into a slightly more awesome version of Van Gogh. You probably have seen photos of these classes on Facebook: your comrades, inebriated, holding frame-worthy paintings at United States establishments like Painting with a Twist or Pop the Cork. That’s because since 2007, the number of like-minded paint and sip businesses has increased rapidly, with hundreds of franchises now operating. 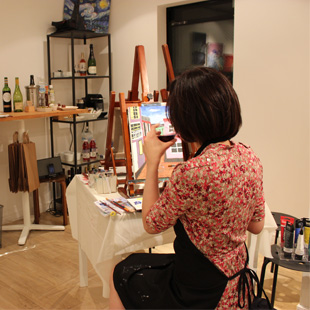 As with all popular Western ventures, the craze has since migrated to Japan. Artbar Creative opened in October 2015 in the heart of Daikanyama, promising a “modern night out for all enthusiasts to unleash inner creativity without inhibitions.” Run by Nicole Ciliberti, the team leads classes most days of the week, pulling inspiration for paint themes from Japan and its seasons. It’s the only studio that holds paint and sip classes at regular intervals, not to mention offers complimentary snacks, non-alcoholic beverages, and wine. Lots and lots of wine … as in, nomihodai (“all-you-can-drink”).

Ciliberti stumbled on the idea for ArtBar during her MBA studies at Globis University in Tokyo. In one of her classes, a “Venture Strategy” project asked students to propose a startup. Seeing her friends’ Facebook posts about paint and sip classes, and realizing Japan’s lack of any, she created ArtBar. The idea developed from there, and after graduation, Ciliberti began forming a team of artists—Bryce King, Ami Ichikawa, and Miwa Takahasi—all whom contribute to the creative direction of ArtBar. 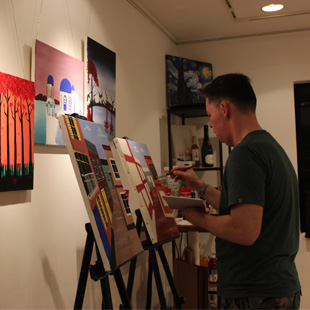 What makes ArtBar unique in the paint and sip community is that they offer a range of classes to bring customers closer to all types of art through various mediums and perspectives, in both English and Japanese. There’s the classic beginner session, “Back to Basics.” “Tiny Techniques Thursdays” are dedicated to introducing art theory concepts, which tend to appeal to Japanese crowds needing more structure. “Mommy (or Daddy) & Me” are family-friendly sessions emphasizing fun and freedom. Other workshops, hosted by guest stand-in teachers, range from photography workshops to Japanese crafts. ArtBar can also accommodate different groups looking for a unique alternative to a birthday or bachelorette party.

For Golden Week, my friends and I decided to try out a “Back to Basics” class on a beautiful Wednesday evening. Located down a quiet alley, the small studio appeared like a beacon: well-lit, quiet, and intimate. Easels and paints were on standby as students chose a seat and secured themselves an apron, so not to get paint—or wine—on themselves. A “model painting”—a street lined with colorful houses—was presented for us, which we all looked at dumbly before appreciating its necessary guidance. King led us through sketching an outline with pencil, how to mix the colors, and brush techniques. The paintings began to take shape. 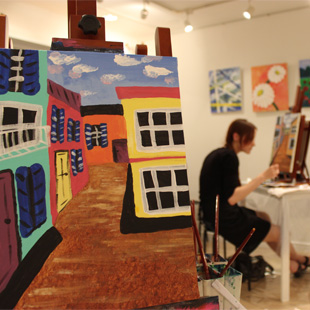 During the class, the variety of talent was clear. Some people needed hand-holding throughout; others just did their own thing, choosing colors and styles that contrasted the original. Those who drank seemed to care less—myself included—about taking advantage of Ciliberti’s generous refills of sparkling champagne. Regardless of our path, art was created, and I was impressed and surprised that everyone in the room seemed to find their own flair.

ArtBar makes for a great alternative night out in Tokyo—and unlike classes abroad, you don’t need to worry about a designated driver. Though classes are much more popular with women, Ciliberti hopes to change this; it would make for a great date night or a place to make new friends. But perhaps that best part of ArtBar is what you come home with: a hand-crafted souvenir, a well-rounded evening with friends, and possibly a hangover in the morning.