Kings of Tokyo: The First All-Drag-King Revue Since the Edo Period

“Well what’s so interesting about being a man? Why would people want to see a drag king playing a man onstage?” These are questions often asked to Skyler, a New Yorker whose drag king persona Emmanuel Transmission regularly delights Tokyo audiences. It’s undeniable: while drag queens have enjoyed a surge in popularity thanks to shows like RuPaul’s Drag Race, drag kings are marginalized in the scene. This weekend, the spotlight will be pointed squarely on drag kings, when Skyler’s drag troupe Kings of Tokyo hosts the first all-king revue since the Edo period. Drag kings from over 12 different countries will descend on Shinjuku Gyoen Sound to thrill you, chill you and make you question the gender binary.

Ahead of the show, I picked Skyler’s brain on how Kings of Tokyo came to be, the sidelining of kings in the drag community and why drag kings are superheroes who can save the world. Interestingly, meeting Skyler did bring a superhero to mind — much like Clark Kent, in their day-to-day life Skyler works a desk job (in IT), but by night, they become Emmanuel Transmission, a glamorous drag king complete with a full glitter beard. Even more like Clark Kent, this transformation isn’t one you’d expect. In conversation, Skyler is cheerful and intelligent, radiating a quiet confidence. Only occasional swells in phrases and suspiciously well-crafted gestures hint at the fabulous alter ego beneath. 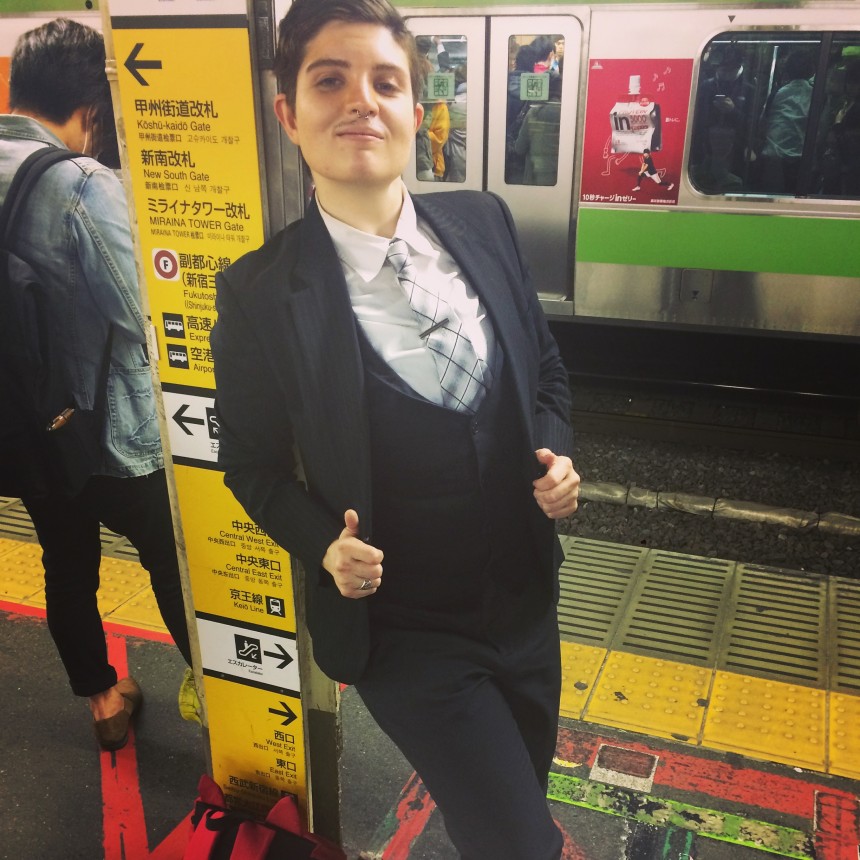 Skyler’s love affair with queer performance goes deep, having gone to their first The Rocky Horror Picture Show screening at just 2 years old. “Even as a toddler, I felt a lot of identification with Dr. Frankenfurter! They were the first non-binary queer character that I saw. And even at that age I thought, oh my god this, this is me!” Skyler began acting in amateur productions of Rocky Horror at age 14 and then experimented with burlesque at university. “Coming from that already very queer performative space, being a king was just a matter of time, really.”

Performing as Emmanuel Transmission may have been a natural evolution, but coordinating Kings of Tokyo was another matter entirely. The troupe was largely recruited from the Tokyo Closet Ball community, an international group that puts on nights of gender subversive comedy in Tokyo, including drag. “I don’t see myself as a born leader at all. No, no, no. In my 9 to 5 I’m this nerdy IT guy, poking my head out from the server room like, ‘Can I fix your PC?’ So transitioning to being a leader, putting on a show, having that responsibility, has been a process.”

Indeed, coordinating grassroot performers and stage crew from all over the world seems no small feat, particularly when you consider that much of it has to happen bilingually, but Skyler, who is a fluent Japanese speaker, is mostly unconcerned with language and nationality. “As far as the dynamic between Japanese kings and foreign kings, there isn’t too much of a problem. Many of us can speak both Japanese and English. There are some kings that can only speak Japanese, there are some kings that can only speak English. But gender and gender roles have kind of been exported, right? They’ve been globalized. So with performance you don’t really need to know the language for the outfit and your movements to tell the message. The show itself will be conducted in English with some Japanese but I don’t think you need to be an English speaker to get a lot out of it, because the message is something that we’re giving with our bodies, it’s something that doesn’t need words.”

The public presence of drag kings in Tokyo has been a long time coming, but Skyler is keen to point out that what Kings of Tokyo is doing is far from new: “Actually, Japan has a very long history of drag kings. For example, Tekomai. They were super big in the Edo period. They were geisha who would dress as male construction workers and they would go to all these festivals around Edo and other places in Japan and they would perform kabuki and really rile the crowd up.”

There has also been the presence of the popular Takarakuza Grand Theatre Troupe, in which female performers play male roles in lavish, Broadway-style musicals, but Takarakuza, Skyler explains, occupies a different space (and role) in Japanese society. “The big difference between Takarazuka, which I think of as theatre, versus a drag performance, is in a drag performance, there is quite often a political element, there’s this expression aspect, there’s this showing of the constructed nature of gender whereas Takarazuka is very controlled by male influence. The people who run it are male and keep the performers under an iron fist. There’s a lot of rules, there’s nothing really subversive about it. It’s a great show, but it’s not what I would call drag.” 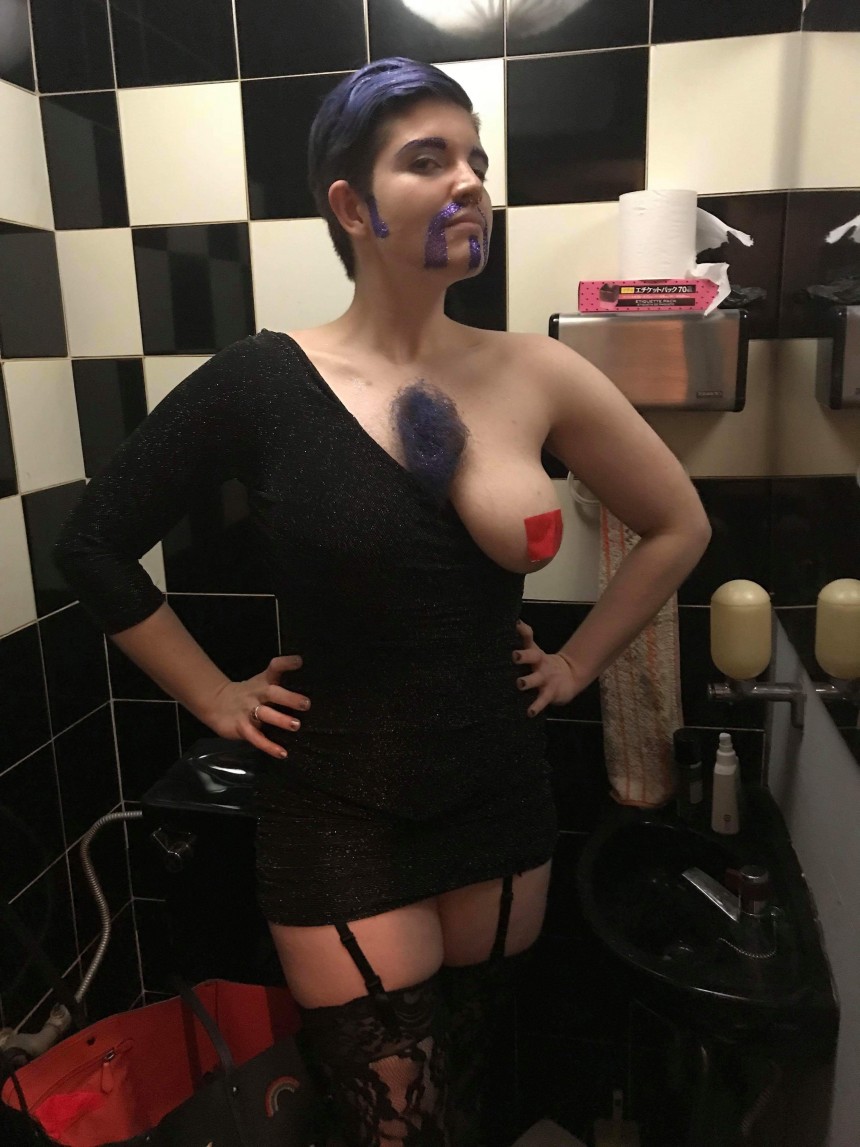 When even your gran watches RuPaul, it’s a shock that many people still don’t know what a drag king is. “So much of pop culture has become obsessed with drag queens that it’s hard for kings to get a foot in,” Skyler explains. “I think that some of that might be that, unfortunately, even drag is very male dominated. You always have queens headlining and queens can get paid a lot more. I find that kings are sidelined, worldwide. I have so much respect for my drag sisters. I think we’re doing the exact same things, which is putting an entertaining spotlight on the constructed nature of gender, but, with femininity, it’s very clear… I mean you don’t have to have read Judith Butler to know that there’s a lot of performance that goes into femininity, with makeup and hair and heels.”

Society has conditioned us to believe that it’s women who should be looked at and men who should look, so even when it’s a ‘man’ performing as a drag queen, femininity as spectacle is not unfamiliar. An audience turning up to watch a performance of masculinity, on the other hand, is truly subversive–even therapeutic–in a society dominated by the male gaze. In this way, the reason kings are sidelined is what makes their performances so powerful. It’s this parody of gender—drag king performers (who are often, though not always, women) becoming champions of masculinity—that is unnerving to some. But perhaps it’s something that many cisgender men need.

“Thanks to feminism, what it means to be a girl or a woman has really expanded,” they explain, “But unfortunately, masculinity hasn’t really had much movement with that…There are two acceptable ways to be masculine: you can be violent or you can be a protector. In a way, doing drag is my way of helping. By playing with gender, I feel I’m helping people who are masculine, whether you’re trans or cis or whatever, see how many different ways there are to be a man, because it’s so hard honestly for men in this world right now.”

Indeed, the global conversation is slowly turning towards “the problem with men.” Men are three times more likely to die by suicide than women, and commit 76% of violent crimes in the US… not to mention the perpetrators of the recent surge in American mass shootings are predominantly male. Perhaps the way to tackle these grave issues is to start to take masculinity less seriously. “Yes, drag can totally save the world,” Skyler laughs. “We’re all superheroes, don’t you know?”

Kings demonstrate that masculinity can be worn in different ways, that it need not take itself so seriously and that it can be worth looking at – even beautiful. “Masculinity is just as much of a performance as femininity,” says Skyler. “Men’s expression is just as capable of being loud and crazy and out there, but it’s not something we automatically associate with masculinity, and I think that’s a problem because men feel they don’t have the option of expressing themselves within the ‘standard’ box of masculinity. So of course I want to show everyone a good time, it’s going to be a fun, high-energy performance, but I also have a side agenda where I want to bring these issues to the forefront. I want to talk about how masculinity can be just as beautiful as femininity and just as worthy of applause.”

Aside from international heroism, Skyler hopes the show on Saturday will bring new members into the drag community. “If anyone comes and feels inspired, don’t get stage fright. Don’t get starstruck, not that we’re stars haha. This is a real grassroots thing. We’re looking for more people to join the drag army! Whatever you can do: we need people to take tickets, we need people to help advertise. If you have a will, we have a way to make you part of the show. We’re waiting for you, we welcome you.”