Horsing around in Gotemba

The hustle and bustle of life in the city can really take its toll. Sometimes, only an escape to nature can prevent insanity. At such times, Gotemba beckons—but not for the reason people usually head there. Away from the frantic shopping at the premium outlets is Virtus Riding Club, a tranquil, equine world in the shadow of Mt. Fuji.

Those who rarely leave the city may find it hard to believe that such a quiet place—an atmosphere that feels lifted out of the past—exists barely two hours away by train. But it does, and while there, visitors will forget all about the chaos and stress they’ve left behind. That was certainly true for us, as Metropolis recently had the chance to visit Virtus Riding Club for two days on the trails. 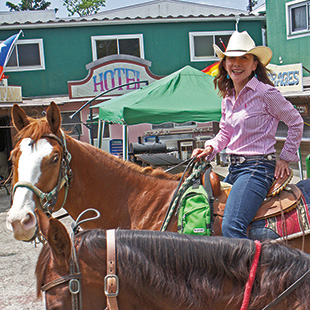 Founded 40 years ago by the father of Mariko Kato, the current head trainer, and guide Rika Koyama, who led one of our rides, Virtus is a family affair—and it shows. The entire staff feels like a family, and upon setting foot on the ranch, you become part of that family, too; this holds true even for those who don’t speak Japanese. Everyone at Virtus speaks English, and lead trainer Hideaki Ototsu will teach riders all they need to know for a horseback journey—with an Australian twist. But more on that later.

What comes through loud and clear is that everyone at Virtus loves horses. Spending ten minutes with Mariko makes it clear that nothing is more important to her than their well-being. As she explains, horses are like people; they each have their own personality. People get to know them, and they get to know people. Devotion goes both ways. It’s family.

Virtus is also a great place for kids. Spending time around animals is an important part of their development, and the combination of horses and nature is a wonderful escape from our overly tech-saturated world. The whole Virtus family interacts so well with children, and we watched one of their youngest students compete in a jumping competition. Amazing! After watching kids stare into smartphones every day, seeing this level of talent and devotion—these students have to care for their horses, as well as train—to something decidedly non-tech was heartwarming. For families, this is a great weekend outing. 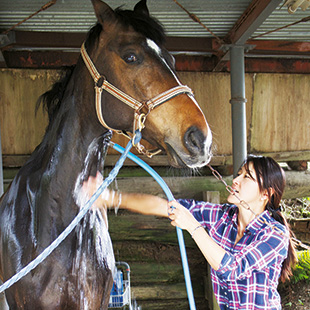 Some 150 members call Virtus home, and the club offers two distinct styles of riding: British and Western. The British style, known as “dressage,” is the kind of competitive equestrian sport you see in the Olympics and other competitions such as the World Equestrian Games. The Western style—as in the American West—is what this article will focus on, as this is the riding style visitors will personally be taking part in.

The Western style is what probably comes to mind when thinking of horseback riding for leisure. This is riding the trails. At Virtus, the trainers will take guests on a trip into the forest that neighbors the ranch. The complexity of the trails and required control of the horse will depend on the rider’s experience level.

During our visit, we ventured into the forest on both Saturday and Sunday. The first outing was with lead trainer Hideaki Ototsu—or simply “Aki,” as he prefers to be called—who showed us the basics of handling the harness, controlling the horse, and earning their trust. As he explained, the relationship between rider and horse is a two-way street. You take care of them, and they’ll take care of you. But horses are also strong-willed (hence the expression “stubborn as a horse”), and they aren’t going to do what’s asked if they don’t trust and respect the rider as the boss. 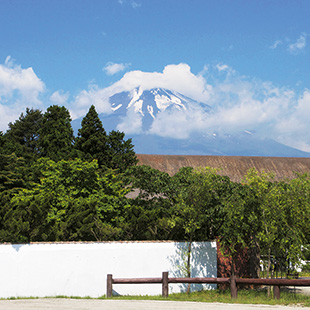 A view of Fuji from Virtus
(Photo by C Bryan Jones)

Learning the basics is a lot easier than one might think. Aki will quickly have even those who’ve never been on a horse before feeling at home in the saddle. Our first ride required nothing complicated—except for keeping the horses from eating all the grass and branches they passed—and was truly relaxing. Beginners will have no problem at all, and the Australian-raised Aki is so personable that the experience is not only soothing, but also entertaining!

Our second forest adventure, led by Rika on Sunday, put our new skills to the test with more challenging terrain that took us up and down hills and through narrow passages—something beginners wouldn’t normally do so soon. It was awesome, and gave a taste of how returning to Virtus regularly can offer new experiences.

While the horses are the centerpiece, Virtus also offers a variety of facilities. The clubhouse provides a place to relax on the first floor, and a restaurant on the second. The view of Mt. Fuji from the restaurant is breathtaking, and it’s the perfect setting for parties, events, and even concerts. There’s also a disco ball, should a guest want to channel his or her inner Travolta. Back on the ground level, a bar, powder room, and shower room can also be found. 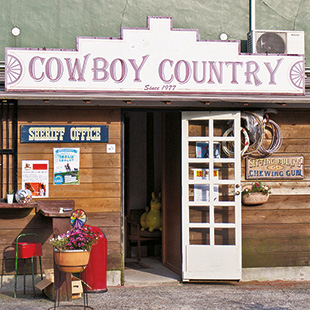 The Wild West in Gotemba
(Photo by C Bryan Jones)

Not far from the clubhouse is the Western Area, modeled after a Wild West town. This quaint cowboy country is where visitors will find the horses for trail rides—like our new friends San and Chip—and also plays host to barbecues. Behind the Western Area is a field surrounded by white picket fences, home to many ponies—a delight for the kids.

Many members house their horses—including some of Japan’s top competition horses—in Virtus’ British stables. Touring this facility, as well as the tack room, is a great way to connect with the easy-going lifestyle. Guests may even get to watch a horse being washed.

Depending on the season, there are many activities to add to your time in the country, including a wagon parade, Christmas party, night BBQ, and even a country dance event. Want to ride in the snow? That can be done, too.

At the end of the day, Virtus is one trip you owe it to yourself to take. Even if a day of horseback riding isn’t what you’d consider your cup of tea, once you’re on the trail—glorious Mt. Fuji looming on the horizon—you’ll be glad you saddled up. Mariko, Rika, Aki, and all of the staff are absolutely delightful, and you’ll leave feeling as though you’ve not only gained a wonderful new connection to nature, but a new family, too.