Visualizing Africa in the Arakawa Ward

An unexpected artistic connection between Africa and Japan

We rarely see contemporary African art on Japanese soil, least of all lens-based projects that focus on small pockets of African local culture. So an exhibition exploring the photographic and video work of Cameroonian artists is a little unusual. Yet Tokyo is nothing if not surprising, and its art scene can definitely be relied upon to provide a few cultural curve balls. This week, YaPhoto@Arakawa Africa – a three day event which includes an exhibition, screenings and a talk with the show’s curator Christine Eyene –  opens at the intimate OGU MAG gallery, a stone’s throw from the Sumida river in North East Tokyo.

The event is a prelude to Arakawa Africa, a yearly festival started in 2010 and organized by the OGU MAG gallery that aims to extend the presence of African art in the Arakawa ward. On hearing about this festival, Eyene approached the organizers and was introduced to their artists and local residents who had links to Africa – of both African and Japanese heritage. Eyene is co-founder of another African-focused initiative, this time based in the UK: the Yaounde Photo Network, otherwise known as YaPhoto, an interdisciplinary photography and video platform. The collaboration of these various organizations has led to this presentation, which presents the work of five Cameroonian artists yet to be exhibited in Japan, ahead of the Arakawa Africa festival in November.

YaPhoto in itself is an intriguing project, born to address the lack of platforms for art photography in Cameroon. Made up of a website and an event series, at its heart is the online portfolios of a range of Cameroonian photographers, or foreign photographers based in Cameroon. New to the project and shown for the first time in Tokyo is Digital Africa, a series of video art screenings which proves an integral part of YaPhoto@Arakawa Africa this weekend. 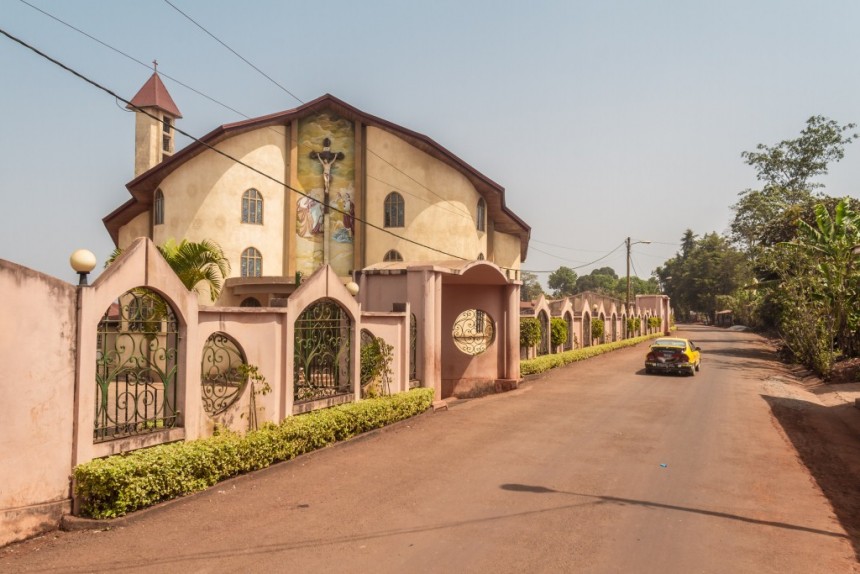 On to the artists. What YaPhoto presents is a captivating, broad spectrum of the work being made in Cameroon, at once overarching yet detail-focused and addressing specific themes or issues intrinsic to local cultures. Whilst all the works share one medium — photography — each artist is distinct, creating a 360-degree overview of contrasting aspects of African culture, which often merge traditional and modern imagery.

Yvon Ngassam’s work juxtaposes urban and rural African landscapes, exploring cultural heritage through his brooding photographs of Bangjoun, West Cameroon. In contrast, the street scenes of young Cameroonian kids and teens either rollerblading or BMX-ing around the large metropolis of Douala provide a unique snapshot of African urban culture. Self-taught photographer Blaise Djilo looks towards ritualized activities, as he documents an annual harvest festival that takes place in Tupuri. His dynamic portraits of individuals are full of character, both playful and humorous and therefore at odds with traditional notions of ceremonial African events.

Perhaps most striking are the powerful portraits of Steve Mvondo, part of his recent “Crown of Beauty” series (2016), who uses the colorful and symbolic presence of the head wrap to give meaning to his works. In imagery surrounding African culture, the head wrap carries vital significance, a harbinger of debate surrounding black female politics and representation. In this sense, Mvondo gives his sitter’s agency and pays tribute to notions of African beauty, whilst considering narratives of repression. Again, like the other photographers represented, his work straddles the traditional and the modern, adding to this intriguing and provoking display.

This project is nothing if not collaborative. No less than four cultural organizations are involved in the event; alongside those mentioned, also involved is yet another of Eyene’s organizations, which this time takes the form of “Making Histories Visible”, a research project with the University of Lancashire, UK. As Eyene explains, the group was started to address “the underrepresentation or marginalization of certain practices from mainstream art scenes, by collecting histories in the form of archives, and developing projects that give those practices visibility.” In Arakawa, we definitely see the fruition of the work of these interdisciplinary groups, successfully staging an event that focuses on the local rather than the abstract and overwhelmingly vast concept of ‘Africa’ as a whole, within this unusual Asian context.

At the core of this project is the interplay between African and Asian art and culture. Eyene explains, “As Africans, we are often expected to circulate within the same geographical spaces, often defined along the colonial and post-colonial lines: Africa of course, the Diaspora or the West. Rarely are we expected to engage with other territories like Asia.” With this in mind, the presence of YaPhoto and Arakawa Africa in the Tokyo is critical; hopefully African art will soon find itself shown more frequently across other cultural spaces in the city.

The event ends on Sunday 12 August.