A retrospective exhibition of the prolific artist’s work, running until May 22 at the National Art Center Tokyo

When asked to name internationally famous Japanese artists, most people will probably answer Yoko Ono (whose brilliant career is perennially obscured by her also being Mrs. Lennon) or Takashi Murakami. However, few people can match Yayoi Kusama’s presence on the world stage or the sheer influence she has had on contemporary artists. Time magazine recently included her in its list of the world’s “100 Most Influential People” – the only Japanese to make the list. Although her name may not immediately ring a bell with many, her polka-dotted works and brightly colored giant pumpkins are instantly recognizable.

The National Art Center is currently showing My Eternal Soul, one of her biggest shows to date, and a tour de force covering her entire career from her beginnings to her most recent work-in-progress project.

Chronologically speaking, the exhibition starts from the end: we enter a huge space whose walls are covered with 132 pieces never before seen in Japan. These works belong to the 500-painting-strong “My Eternal Soul” series, on which Kusama has been frantically working since 2009.

As she says in the audio guide available to the visitors, “I’m so focused [on this project] that I even forget to eat, and there are times I’m so tired I faint.” Apparently she works so quickly and with such a concentration that she manages to finish one 194cm x 194cm painting in just two or three days. 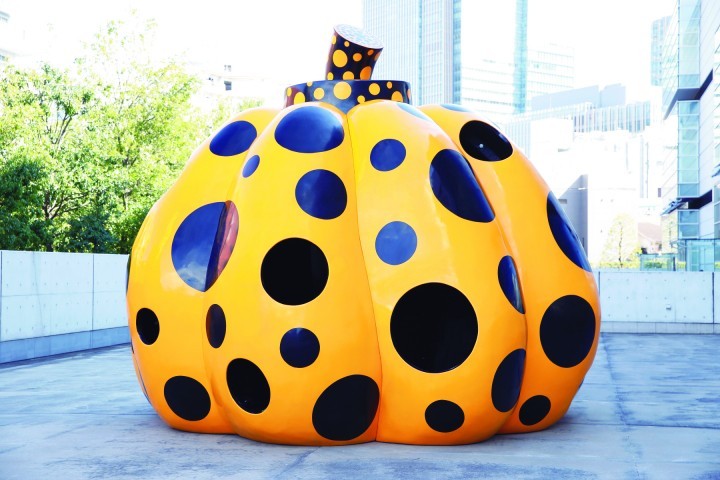 The series is marked by extremely rich variation, with figurative motifs and abstract patterns freely coexisting. It’s a riot of funnily scary faces, amoebas and thousands of small spying eyes. Some of these works are monochrome while others show an array of colors including gold, silver and copper. The overall effect of seeing all these works next to each other is simply overwhelming.

The great novelty of this exhibition is that, in this particular room, people can actually take pictures with their phones. As a result, the usual quiet contemplation of an art museum is replaced by people dashing from one corner of the room to another, trying to take as many souvenir photos as possible.

Luckily, this is the only place where picture-taking is allowed.

For people who only know Kusama’s later works, the next room is eye-opening: it exhibits her early drawings and paintings. As a child, Kusama was plagued by hallucinations (the violets that grew near her house would turn into people’s faces and begin to talk to her) and began painting to escape her fears. In the 1950s, Kusama was depicting both abstract and natural forms and developed a variety of motifs based on plant and animal forms, the planets and universe. Her works from 1950-52 show a maturity that belies her young age. Looking at Accumulation of the Corpses (1950), one can only try to imagine the kind of nightmares and hallucinations she experienced at the time. Though beautiful and artistically accomplished, these early works directly speak to our purest emotions.

We next jump to Kusama’s American period. In 1957 she “escaped” (as she has often said) to the U.S., settling down in New York in 1958 and grabbing the local artists’ attention with her Infinity Net paintings, several of which are also on display. These vast fields of canvas filled with a mesh of monochrome strokes have neither boundaries nor center and eliminate composition. At the time they were regarded as fresh and innovative, anticipating the aesthetics of Minimal Art that would become mainstream in the 1960s. Even today they never cease to mesmerize.

A few years later, in 1962, Kusama began to challenge traditional concepts of sculpture being made from wood, metal or stone, by creating so-called soft sculptures — soft phallic protrusions affixed to furniture and other ready-made objects. The ladder and dresser displayed in Tokyo, together with the macaroni-covered coat, have been explained as obsessions with sex and food.

One of the most outstanding works Kusama has ever made is Aggregations (One Thousand Boats Show) (1963), an installation of a boat painted silver and covered with phallic protrusions, along with 999 posters portraying the same boat on the surrounding gallery walls, ceiling and floor. This has been reconstructed at this exhibition by using Walking on a Sea of Death, a similar-looking work from 1981.

Kusama’s famous pumpkins can be found in several places throughout the exhibition. She first saw pumpkins in the fields around her house when she was a child, and they appear even in her early Nihonga paintings. “I was enchanted by the charming form of pumpkins and became interested in creating pumpkin-like large, bulbous decorated bellies. Their strong spiritual balance appealed to me,” she says.

Of course such a comprehensive retrospective wouldn’t be complete without the Infinite Mirror Room installation that first appeared in her November 1965 solo exhibition. The work combines a mirror room with electric lights. The bright-colored lights flickering in infinite space represent the concrete realization of “the soul wandering between life and death in an ecstatic space,” as Kusama described in her autobiography. 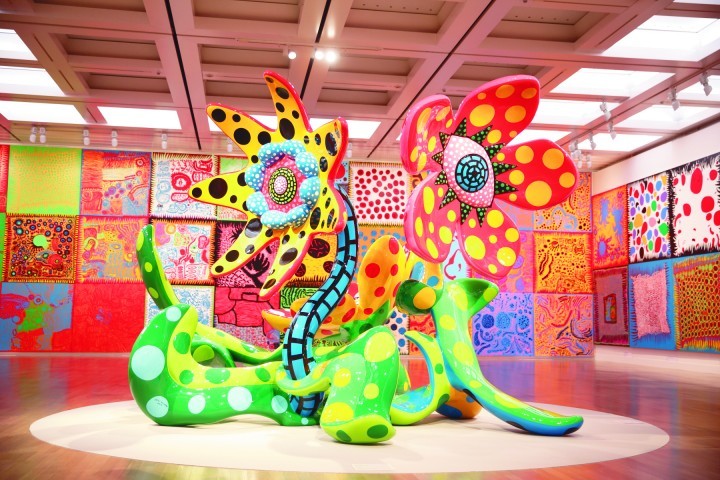 The third part of the exhibition covers Kusama’s return to Japan. After the deaths of many people close to her and suffering from mental illness, the artist moved back to Tokyo in 1973. While living in a psychiatric hospital, she immersed herself in creating collages, pasting printed photos of plants and animals to paper and adding patches of watercolor and gouache paint. Though these works are not as famous as her polka dots, infinity nets and pumpkins, they show a more introspective side of her work. These are also some of the most beautiful works she has ever produced. “The universe keeps dying and being reborn,” she says about these works. “This cycle will go on forever, even after I die. I’m forever grateful to god that gave me my talent and introduced me to the art world. I may have created thousands of works, but when I’m gone the world will go on forever, even without me.”

Following Kusama’s infinity themes, the exhibition is laid out in a circular way, so when you reach the end, you can start all over again, and again. Considering the massive human jams caused by all the people visiting the show, this was an excellent idea.

Having just turned 88, Kusama could be excused if she decided to hang her brushes and ink pens and enjoy some rest but, judging by her recent exceptional output, she is not finished yet. Indeed, her parting words confirm her commitment to her art: “Today’s world is marked by a lot of anxiety connected to ever-growing strife between nations and individuals and to elusive prospects for peace. We must, as human beings, be ever more determined to build a better world through cooperation. I have always been dedicated to my art, struggling day and night to create. I intend to continue as long as my heart keeps beating. My greatest desire is that my vision of a future of eternal harmony among people be carried on.”