Not just your run-of-the-mill views, these illustrations are intimate, surprising, and occasionally fantastic

At the entrance to Shibuya’s Nonbei Yokocho, a family of red daruma dolls tightrope walk across the overhead power lines. A flock of sheep jostle across the road at the street crossing opposite the Ginza Wako clock tower. Three yellow stars in white tuxedos tip their hats at passerby at an intersection in Asakusa. A boy comes to meet his date at the foot of a flight of steps in Yanaka, while at the top a huge white lucky cat beatifically waves its paw. 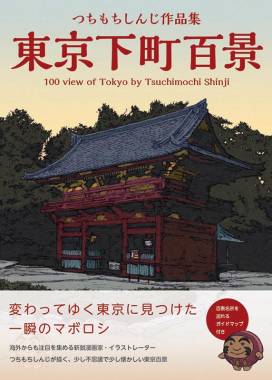 These are the tableaus that populate Shinji Tsuchimochi’s art book 100 Views of Tokyo, an illustration project he worked on for three years. Intended as a modern reimagining of Hiroshige Utagawa’s influential ukiyo-e woodblock prints One Hundred Famous Views of Edo, (Edo being the old name for Tokyo), Tsuchimochi’s illustrations quickly take on a life and flavor all their own, one that is warm, quaint, and sometimes wistful.

The Tokyo in this book is not the electric modern capital people now know it as. Tsuchimochi focused on the old shitamachi (downtown) areas of Tokyo, looking for Edo and Showa-era streetscapes which felt like traveling back in time. Most of the pictures draw on homely scenes from neighborhoods such as Ueno, Ota or Setagaya, and show a fondness for old-style shopping arcades, small bridges and shrines. Rather than using his drawings as straightforward records, Tsuchimochi infuses his art with fresh-eyed wonder and a fantastic, sometimes surreal imagination reframing the scenes of his city. 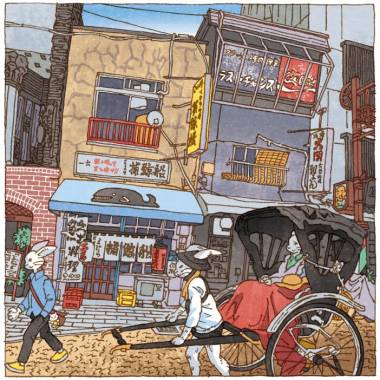 He writes: “Instead of just copying the landscapes, by adding [the] touch of seasons, weather and characters, thinking of songs I listened to, books I read, movies I watched and so on—it was like [a] collage of memories. I still remember that I felt sweet sorrow and happiness when I saw precious views like sunset or neons in my childhood…”

So we see, for instance, a lovely view of the Keikyu Tama River Bridge in Ota at sunset, the train halfway across the bridge while the low-hanging sun lengthens the shadows of a man and his dog walking through the field underneath. Or we see a woman bending to pet a cat outside an old house in Hongo, the street bursting with potted plants. But we also see scenes populated with ghosts and youkai and walking daruma dolls, umbrellas with eyes and kappa zooming across the water on speedboats.

Tsuchimochi cites French comic Les Aventures de Tintin among his influences, and it shows. With its rich coloring, lovingly detailed tableaus, and infusion of the playfully supernatural into peaceful moments from everyday life, Tsuchimochi’s art may also draw comparisons to manga such as Xxxholic and Natsume’s Book of Friends or, perhaps inevitably, to Ghibli films. Tsuchimochi’s dedication to the small and out-of-the-way, and his homage to the lingering remnants of the past, make for a collection that is at turns cheerful, nostalgic, and sweetly surprising.