Welcome to the Metropolis Community Pages.

As we head towards the end of the year, November brings with it a number of fundraising and networking events. This month there are events benefiting mental health, Syrian refugee children, children with disabilities and marginalized children in Japan. It’s a good time to meet new people and find out more about what is going in philanthropic spaces while also supporting those in need.

Perfect Liars Club is the smash hit US comedy story interrogation show taking Tokyo by storm. Four people tell a story, and three are completely true. But one person is telling you a lie. Listen, laugh, interrogate, vote. Can you spot the liar? This show is special: it’s a British style, belated Halloween Edition, giving you a chance to squeeze one more wear out of your 2018 Halloween outfit.

Why is Japan Resisting Change?

Winning his 3rd term as LDP president, Shinzo Abe is on course to become Japan’s longest-serving prime minister. In his “Innovation 2025” vision, released in 2007 during his first stint as premier, he committed his cabinet to turning Japan into an innovative nation. But 11 years later, not only is Japan not an innovative nation, it is losing the innovation race to China, the United States, South Korea and others such as Taiwan, Germany and Singapore. Why? While technology has advanced globally at lightning speed, Japanese business, society and government remain largely closed to change. Instead, they cling to glorified memories of the past and strongly resist the introduction of new technologies and processes, and the social values necessary for their absorption. Creativity is not required. Innovative ideas are crushed at birth. Apathy has become normal and a majority of society feels numb. Why is this happening? Do we have solutions?

*Registration is encouraged, but not required

Globalizing/De-provincializing the critique of heterosexuality

Within Western sociology there is an increasing emphasis on the loosening of normative constraints on sexuality and the increased visibility of forms of sexuality that transgress, subvert or unsettle the heterosexual norm. At the same time the sociological lens has been applied to the institution and practice of heterosexuality itself. In the context of recent challenges to the parochialism of Western theory this presentation will consider how the analysis of heterosexuality could benefit from widening its scope beyond the current Eurocentric focus. Guest speaker Stevi Jackson, Professor of Women’s Studies at the University of York, considers whether her own approach to heterosexuality, which locates it within a multi-dimensional conceptualisation of the social, is flexible enough to work cross-culturally or whether it is too strongly marked by its Western origins to have wider applicability.

Lecture in English / No RSVP necessary. 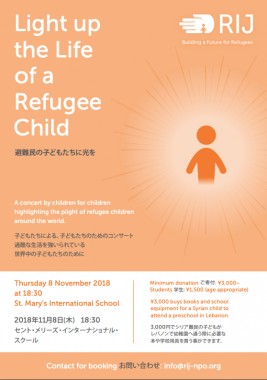 Light Up the Life of a Refugee Child

A concert by children, for children, will highlight the plight of refugee children around the world. A donation of ¥3,000 buys books and school equipment for a Syrian child to attend a preschool in Lebanon. Students from St. Mary’s International School, Seisen International School, Junten Middle and High School, International School of the Sacred Heart and The American School in Japan will be participating. Support Syrian youth here by joining the Tokyo area kids concert.

Fruits in Suits 4th Annual Fete: Visibility for Youth! with the French Embassy

Fruits in Suits Japan’s fourth anniversary event! This year focuses on one of the most critical issues of LGBT+ community growth and development — visibility. This event is fortunate to have “out” professionals in education, business, government, entertainment and sports share their courageous stories with younger members of the LGBT community.

#GivingTuesday is a global day of giving, fueled by the power of social media and collaboration. Celebrated on the Tuesday following American Thanksgiving and the widely recognized shopping events Black Friday and Cyber Monday, #GivingTuesday kicks off the charitable season, when many focus on their holiday and end-of-year giving. The event is hosted by You Me We NPO. One of the best ways to get involved is in your own community. The team has created a directory to help you find organizations, charities, events and more in your own community. 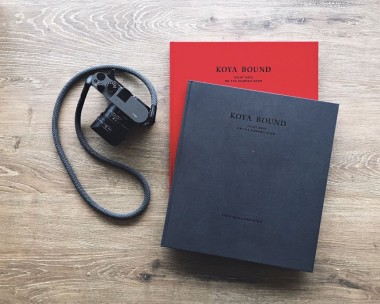 Writer and photographer Craig Mod will talk about the design of walks — focusing specifically on Japan’s pilgrimage paths and old roads. Why is walking in Japan so conducive to meditation and deep discussions? Mod will also break down the production, design and philosophy behind his book, Koya Bound.

Setsuko Thurlow, a Hiroshima atomic bomb survivor, delivered a speech on nuclear weapons abolition at the Nobel Peace Prize presentation in 2017. She will talk about her experiences in the U.S. soon after World War II, her life as a social worker and work with the nuclear abolition campaign. This will be an opportunity to think about what is needed for lasting peace.

Find out more about Sarajean’s work by visiting her site sarajeanrossitto.wordpress.com Her Facebook Group: Women of the World March Tokyo (WoW Tokyo) www.facebook.com/groups/197623700694595/