A taste of Hawaii in Hiroo 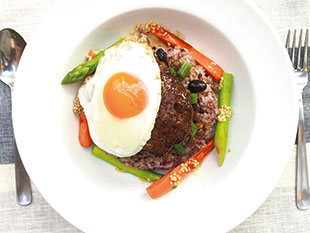 More than the mains, however, this is a place to visit for the appetizers, drinks and atmosphere, with tables aligned for easy group seating amid artistically weather-worn walls and oddly delightful easy-listening versions of reggae tracks and unexpected ‘70s classics like “House at Pooh Corner.”

All of the appetizers are uniquely delectable, with the Island Tapas Sampler (¥1,890) allowing you to try the top four in a single dish. The lomi lomi salmon (¥680 individually) is classic cocktail party fare, a sashimi dish combined with cucumber, avocado, olives, red pepper and onion. The ahi poke (¥720) is a melt-in-your-mouth variant of tuna sashimi, subtly marinated in soy sauce and accompanied with kaiso (seaweed) that offers a surprising flavor treat best saved for last. 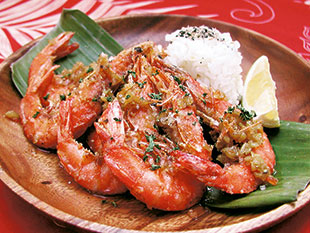 The coconut mochiko fried chicken (¥680) employs coconut and mochi flour to present a mature twist on the fast food staple, with a dash of lime offering the option for a refreshing level-up. And the soft shell garlic shrimp (¥900) drip so delectably, you’ll down the lot—head, tail, shell and all—before you have a chance to realize they’re gone.

Desserts include a fantastically fresh, fruity and filling array of açaí bowls (¥980) and an unfortunately average Oreo cheesecake (¥680), which looks great but amounts to little more than a few Oreos jammed into a sour, vaguely cheesy mousse. The berry sauce offers a hint of salvation, but the dish would be much better chilled.

The drinks menu, however, is like a day at the beach, featuring a variety of fun Hawaiian wines and beers as well as both ordinary and organic tipples. The amber-tinged Volcano guava wine (¥700/glass) is as fruity as an orchard, while the Big Wave Golden Ale (¥890/bottle) tastes like a mandarin orange having sex with a lager. The frozen pineapple margarita (¥980) offers a superb smoothie lurking beneath a deadly pool of tequila.

Sitting on soft chairs set beneath ceiling fans, you won’t notice the time go by—though you might also elect to take your pet out to either of the two small terraces, one of which is entirely non-smoking (there’s no smoking anywhere inside). And don’t forget to check behind the bar, where you’ll find a sizeable secret sofa lounge.