When seeking a getaway from the hustle and bustle of the city, one does not need to look far. Located a mere hour away from central Tokyo along the Izu Peninsula, Atami is a picturesque resort town nestled against the hills that boasts everything that makes a relaxing weekend getaway, a laid-back atmosphere, breathtaking views, and of course, onsen (hot springs).

Hot springs are synonymous to the town of Atami, a name when translated, means “hot ocean.” Japan’s affinity for hot springs coupled with the town’s proximity to the city made the area a popular destination, particularly for company business retreats back in the 80s, an era of Japan’s peak economic growth. The town saw rapid development around this time as hotels and resorts began popping up in order to accommodate the influx of visitors. Until the bubble burst, Atami was a bustling tourist hub throughout the late 80s.

Decades later, the area may not be what it used to be in its heyday, but upon visit, the appeal of the place becomes apparent. 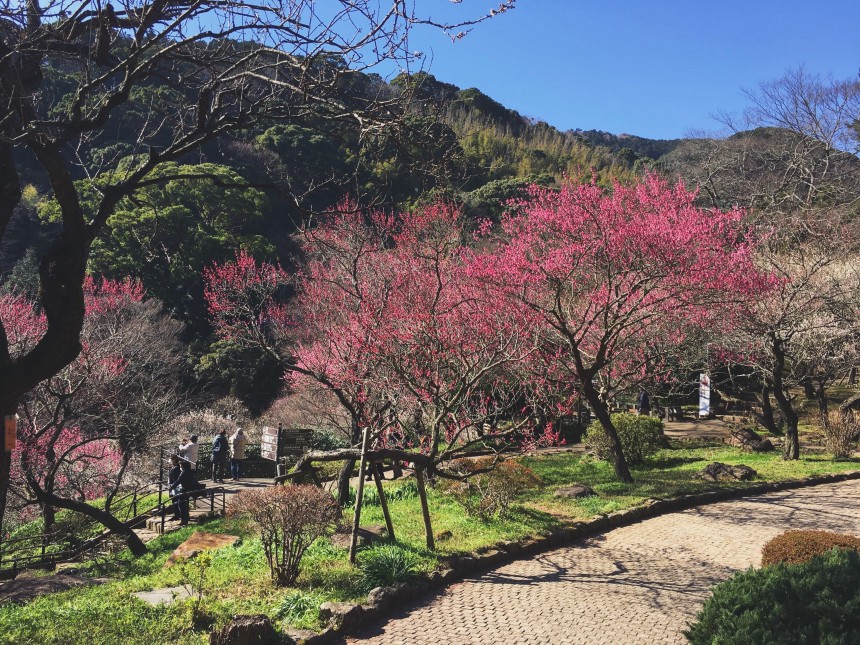 Take a Stroll through the Atami Baien Plum Garden

Locals will tell you that the plum and sakura trees at the Atami Baien are Japan’s earliest blooming trees, attributed to the warm water from hot springs that course through Atami. While the rest of the country begins to see signs of plum blossoms in March, early signs of blooming at the Atami Plum Garden begin in late November, and is already well underway by early February.

For a small entry fee of ¥300 (¥100 for locals and hotel guests), take a glimpse of spring in the 44,000 square metre park which houses over 470 plum trees across 52 different species. At its peak, the park is painted in varying shades of pink, and petals rain down with every strong breeze, landing on paths and in streams that wind through the estate.

Food stands are set up in designated areas, offering local delicacies, sweet treats like strawberries and dango, and green tea to those stopping for a quick break. For something else to do while you’re there, tickets also include admission to a little art museum containing paintings and sculptures by artist Seiko Sawada, who is native to Atami.

Hilltop Views via the Atami Ropeway

A trip to Atami is not complete without taking in the view of the town against its hilly backdrop, overlooking the wide expanse of Sagami Bay. Luckily, you don’t have to book a high-rise hotel to do so. For a return ticket of just ¥600, the Atami Ropeway ferries visitors to the top of Hachimanyama. From the ticketing kiosk to the gondola, everything about the ride up retains a retro feel of decades past until you reach the top, where a newly renovated observation deck gives an unobstructed panoramic view of the place, complete with chairs to sit in and relax, and a cafe for some afternoon tea.

Three minutes away on foot from the observation deck sits Atami Castle, a structure built in 1959 in the style of traditional Japanese palaces, around the time when the tourism industry in Atami was on the rise. For those looking to experience a bit of Japanese culture, the palace doubles as an entertainment centre, with floors dedicated to traditional woodblock prints, known as Ukiyo-e and samurai exhibits as well as arcade games that can be played at no cost. Alternatively, visit the Trick Art Museum located just next to the palace for some wholesome family fun. 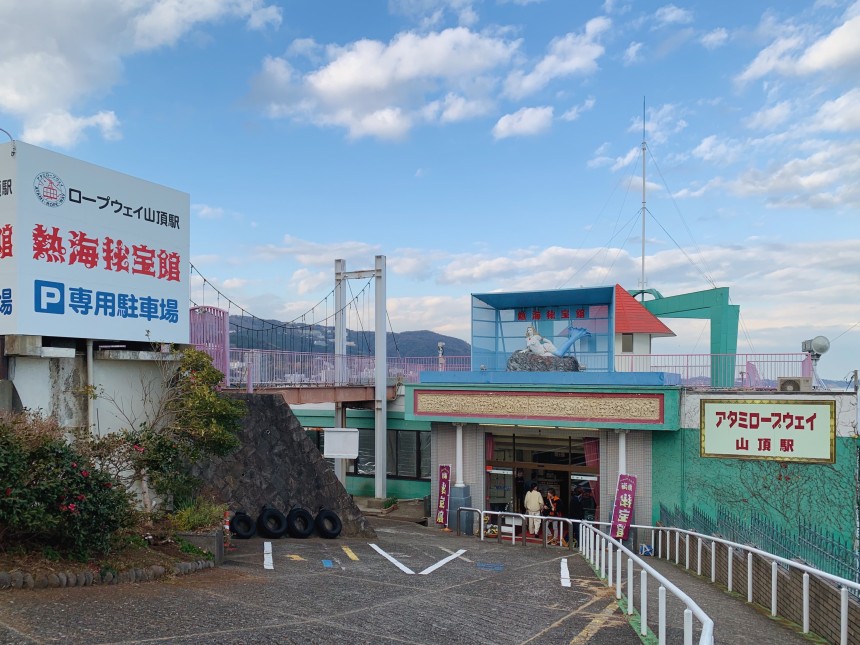 Get Mischievous at the Adult Museum “Hihokan”

On the very same hill is a less family-friendly attraction,  a “Hihokan” or adult-themed museum. Like much of the town, the museum is another relic of the 80s, when establishments of its kind were popular and ubiquitous in onsen towns across the country. Today, the Atami Hihokan is one of the few surviving adult museums left in Japan.

The age of the museum is obvious from its exterior, where a mermaid statue that has seen better days beckons from her perch. Don’t let it deter you however, there’s a whole world of retro sexuality inside to experience. The exhibits themselves range from kitsch to avant-garde, and there is no shortage of surprises. Make scantily-clad mannequins gyrate by turning a knob, or observe disembodied symbols of human sexuality that line the walls, the exhibits are sure to titillate. There is even a collection of Shunga prints that depict sexual activity in the Edo period.

A combo ticket for the ropeway ride and Atami Hihokan can be purchased for a discounted price of ¥1,800.

Take the Tokaido Shinkansen from Tokyo Station for the quickest way to travel to Atami. (¥3,670〜 )

Alternatively, the slightly slower Tokaido main line will take you to your destination at a cheaper rate. (¥1,940〜)

Winnie is a 20-something just trying to figure life out. When not writing stories or blogs about millennial problems you can find her at a cafe reading or knitting stuff.