Lana Nowakowski chats to the presenter and star of upcoming documentary Big in Japan, David Elliot-Jones.

You might not guess it from the film trailer, but the star of upcoming documentary Big in Japan – the same fame-seeker parading around the streets of Tokyo in a huge onigiri (rice ball) headpiece, a tiny fundoshi (traditional Japanese underwear), and nothing else – is actually the shy type who would have preferred to be behind the scenes.

So was his metamorphosis into his character, Onigiri Man, worth all of the shot nerves, the public scrutiny on the streets and the serious (and forever un-erasable) bodily exposure on the internet?

“I am reassured by the quality of the film we have now that it was worth it,” says Elliot-Jones. “But if you’d given me the choice several years ago of working for years on this project or another project, I’d have chosen the other project,” he says with a jittery laugh that suggests he’s still recovering from the bitter cold, explosive conflict and near-bankruptcy he endured in the name of the film.

A few years ago Elliot-Jones and his university mates, Louis Dai and Lachy McLeod, had just wrapped up their first documentary for SBS in Australia. They were armed with their first set of serious equipment, and for the first time ever their company bank account had some money in it. 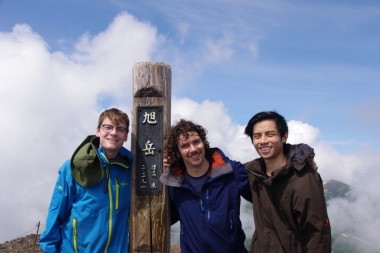 “We just needed a project,” recalls Elliot-Jones. “We were hungry for an adventure. We’d been working on the same documentary for two years and as rewarding as it was to have a final product, it was draining. We had this crazy idea about a fame experiment and everything just clicked.”

Just the week before they brainstormed the Big in Japan documentary concept, Elliot-Jones’ soccer captain had suddenly and unexpectedly shot to fame. He was sent off the soccer field for having a genital piercing, and controversy erupted and spread.

“Sending him off was just ridiculous, and it became a viral news story, covered by outlets all around the world,” says Elliot-Jones. “It was so wacky. He was at the centre of this crazy fame episode, grappling and trying to work out what to do and how it felt. It really told us that the times are changing in terms of fame. At the back of my mind I was wondering what it all meant.”

The three filmmakers hatched the Big in Japan idea, took Japanese lessons, bought one-way tickets and set off for Tokyo. Elliot-Jones had only been to Japan once before; “I changed planes there,” he says. The team lived and filmed in Tokyo for two years, taking up day jobs as English teachers and devoting all other waking hours to the investigation and pursuit of fame. 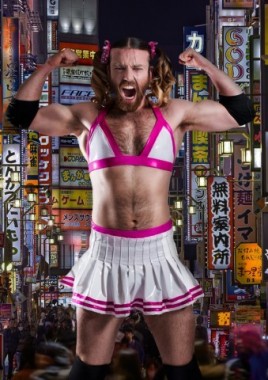 More broadly, the film examines the meanings and costs of fame and celebrity in modern culture, where everyone has a digital platform at their disposal and many, if not most, are keen to use it. During his time in Japan, Elliot-Jones developed a newfound appreciation for social media as a meaningful personal outlet and a tool for finding similar-minded people. And he came to appreciate fame as a dazzling object of normal, natural, human desire. “The ambition for fame is very organic in some people,” he reflects. “Their personalities are such that they need it. It’s just inbuilt.” Elliot-Jones was deeply surprised by how addictive the fame game can be, even for someone who only put himself out there for the experimental purpose of making a documentary.

Despite being happy to hang up his headpiece and fundoshi, Elliot-Jones fondly remembers his time as a fame-seeker in Japan. He narrows down the top highlights to seeing the experiment coming to life, watching the on-screen fruits of his labour as a foreign talent, and, beyond the filmmakers’ wildest expectations, landing starring roles in big-name advertisements. “Even though I’m not an actor and I don’t even remotely consider myself to be one,” he says. “I’m the scientist in a Toyota commercial!”

With filming finished and the post-production phase underway, the filmmakers are crowdfunding to push the film down the home stretch and over the finish line. “We need to buy expensive footage rights and perfect the sound and colour before we bring Big in Japan to the screen,” says Elliot-Jones. “We have almost $17,000 and need another $8,000 to raise the minimum of $25,000. If we don’t have that by the expiry date, we won’t receive any of the pledges and we’ll go back to square one.”

Elliot-Jones says the support they’ve had so far has been phenomenal. “We even have FlyScoot as our airline partner,” he says. “Anybody who pledges any amount will go in the draw to win two return tickets between Australia and anywhere on the FlyScoot network, all over Asia and even as far as Athens.”

Big in Japan is due for release in October 2017. You can sign up for pre-release digital copies of the film and other rewards on the crowdfunding campaign, closing on Thursday, May 4th: https://pozible.com/project/big-in-japan-documentary

For more about the film, see the Big in Japan website here: http://www.biginjapandoc.com/