Bordeaux: Port of the Moon

If you’re thinking of visiting France, chances are you’re intending to go to Paris. That could be a big mistake; when I was last there, crime was rife, queues were long, waiters were stroppy, and everything was overpriced.

A much better option for those with a hankering for the Gallic would be to visit one of France’s secondary cities, of which there are many fine examples. Chief among them is Bordeaux, famous as the center of the world’s wine trade; Vinexpo is held here. The city is also the default second capital of France, whenever the government is forced by the Germans to leave Paris—as in 1870, 1914, and 1940, to name three occasions. 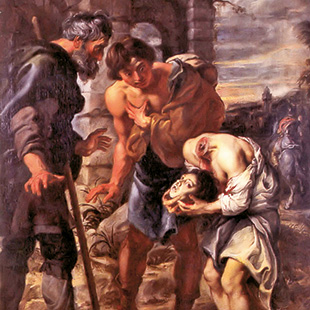 The latest exhibition at the National Museum of Western Art (NMWA) in Ueno is “Bordeaux, Port de la Lune”—which, in my high-school French, clearly means, “the port of the moon.” This is dedicated to the beautiful city of Bordeaux, and aims to reveal its rich history and slightly-provincial art.

The nickname, “Port of the Moon,” comes from the fact that Bordeaux is situated on a curve in the River Garonne, thought to poetically resemble a crescent moon.

The show first takes the visitor down into the basement gallery of the NMWA to see historical artifacts connected to the city. These start with prehistoric items like Venus of Laussel, a carved rock from around 25,000 years ago that shows a naked woman holding a horn. This part of France is well-known for its prehistoric remnants—the famous cave paintings of Lascaux are not too far distant.

Other artifacts testify to the city’s later history as a Roman colony and growing medieval center, when it was under the control of the kings of England. Bordeaux was one of the last places returned to France at the end of the Hundred Years’ War. The eviction of the English also led to a decline in the wine trade, but in the following centuries, the city managed to recover as one of France’s main commercial ports. 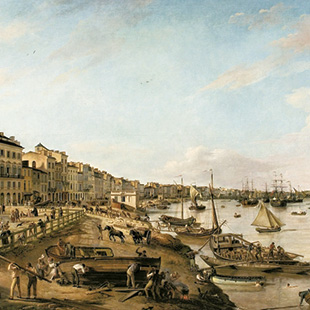 Ascending to the upper galleries, we next encounter the art of Bordeaux. Most of the works have a provincial flavor and are there mainly to tell the story of the city, such as Dance of the Slaves (18th century), which testifies to its connections with the slave and sugar trade.

More impressive are some clean Neoclassical paintings, especially Jean-Pierre Granger’s Ganymede (1812), which bring to mind the work of Ingres. There are also dramatic works by Peter Paul Rubens and Eugène Delacroix—his partially-damaged The Lion Hunt—which testify to the taste for the miraculous and the exotic, as well as a number of lithographs by Bordeaux-  native Odilon Redon, but which are sourced from the NMWA’s own collection.

At times, there’s a feeling of the show being scraped together, with a lot of the artwork sitting awkwardly side by side; and when juxtaposed with some antique items of furniture and porcelain, the occasional surrealist note is unwittingly sounded.

Bordeaux is obviously a fascinating city, but if the local authorities who cooperated with this exhibition are intending to use it to pull visitors away from Paris, there’s a lot more to be done.