Crawler in the Dark

The feudal-era land of samurai and ninja—once Japan’s profile picture to the world—has taken a backseat to the anime and manga wave that reinvented the nation’s reputation, making it a mecca for the cute and the hi-tech. YouTube, however, is determined to bring back the bygone age with their new Jidaigeki (period drama) series, a collaborative video project with Japanese film studio Toei. 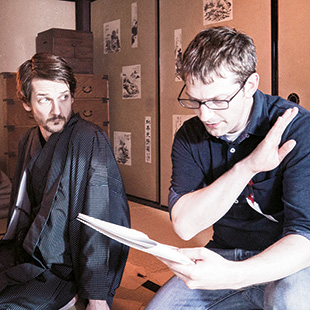 The video giants are presenting media creators in Japan—vloggers, internet celebrities, and the like—with an opportunity to shoot films in an elaborate historical Japanese set. Erected at the YouTube Space in Roppongi Hills, the set includes full production support from film company Toei and guidance from director Toshio Lee. Several YouTubers are queuing up to make use of the retro space, such as kawaii makeup expert Kumamiki, indie musician Kobasolo, fashion/hair/makeup guru Asahi Sasaki, and comedian Hajime Shacho.

However, John A. Lipartito, Jr., creative director for ACTV Japan, intends to put a spin on “jidaigeki” by utilizing the vintage set as the backdrop to a horror movie, telling a tale that crosses worlds and cultures.

“It’s a sci-fi horror film set in the early Meiji era,” says Lipartito of his contribution, Crawler in the Dark, starring actors Bob Werley, Masahito Kawahata, and Lisa Sumiyoshi. “Basic short pitch to it is that there are two scholars—one foreign and one Japanese—who discover an ancient artifact that allows them to travel physically across the universe. But what they learn in using it is that it invites other entities from other worlds to visit Earth. It causes a little trouble.”

Unique, innovative content is where ACTV Japan’s filmmaking passions appear to be. The video production company focuses primarily on independent film projects and works with big-name television companies. But its playfulness comes through in ACTV’s YouTube channel, which contains everything from in-depth, behind-the-scenes features on Godzilla and Yoshihiro Nishimura’s horror-comedy Zombie TV, to original Japan-centric skits, such as a Tokyo Cribz (a spoof of MTV Cribs) that inspects a tiny Tokyo apartment.

So when YouTube announced the project, it was only natural that Lipartito would jump at the opportunity.

“I threw my pitch of the idea of—not quite a samurai [movie],” says the filmmaker. “I think most people are going to do more samurai-type of themes; I wanted to do something—I love sci-fi and horror, so I just had this idea of this film that would work in this time period.”

The transitional period between Edo and Meiji eras, which the set heralds, is also one that attracted Lipartito to the project.

“I’m a fan of H.P. Lovecraft stories, and I’ve always wanted to do a story that was an homage to H.P. Lovecraft,” professes Lipartito, who adds that being in Japan makes that endeavor difficult, given that the horror author’s stories are primarily set in New England. So he decided to try transporting a Lovecraftian tale to Japan. “The idea was to see what I could do with the same time period that H.P. Lovecraft lived and wrote in, in Japan.

“Could I do a Lovecraftian story set in Japan, in his time period?”

See for yourself. Watch Crawler in the Dark on ACTV Japan’s YouTube channel at www.youtube.com/GaijinCh.

For more about ACTV Japan, visit www.actvjapan.com.
Check out the other YouTubers: